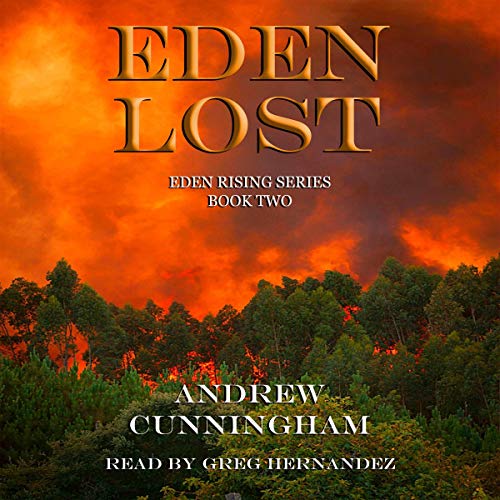 By: Andrew Cunningham
Narrated by: Greg Hernandez
Try for $0.00

They can't escape the evil.

When a forest fire destroys their beloved forest sanctuary, Ben and Lila, along with their six-year-old daughter Katie, head west through the earthquake-ravaged landscape toward a rumored thriving community in Yellowstone National Park.

But another rumor persists of a "great evil" in the Midwest - one they will have to deal with if they have any hope of making it safely to Yellowstone, a community they are not even sure really exists.

Six years after finding their peace, Ben and Lila have to reenter the world. Has it gotten better or become far worse?

What listeners say about Eden Lost

One of my favorite post-apocalyptic series

I received this audiobook as part of my participation in a blog tour with Audiobookworm Promotions. The tour is being sponsored by Greg Hernandez. The gifting of this audiobook did not affect my opinion of it.

I’ve read quite a few post-apocalyptic books, and Eden Rising is was one of my favorites so I was looking forward to listening to Eden Lost. I was not disappointed.

Ben and Lila had their own little paradise in the Smokies until a forest fire destroyed it all. They decided to head to Yellowstone where they’d heard there was a settlement that sounded like something they wanted. It had privacy but people so that their daughter could meet other people, especially other children. Their journey was long and filled with danger but rewarding.

Ben and Lila were strong and well-developed characters. They were deeply in love and were able to work through the tragedies that befell them, although sometimes it took time. They would both do anything for Katie. I liked getting to know the new characters, especially Ben’s brother and his best friend.

The narrator did a good job. His tone and pace were good, and he was able to express the characters’ emotions well. I hope to listen to other books he’s narrated in the future.

Eden Lost is definitely a book worth your time if you like post-apocalyptic stories with strong characters. It stands on its own but I recommend reading Eden Rising first.

A Family Migrates Through Post-Apocalyptic USA

Eden Lost is the continuation of the Eden Rising story, where in the world's few survivors of a mass EMP event are learning how to survive and thrive in a post-apocalyptic world where modern technology has been rendered useless. If this sort of survival adventure story is your thing and this second book is what's immediately available to you, you absolutely can jump in. I have not yet read the first book at the time of writing this review, and I did not feel lost or like I needed to have experienced the initial events of book one to appreciate what was going on.

Ben, Lila and their now six-year-old daughter Katie have been considering finding other survivors for Katie's sake when a forest fire makes their decision for them and forces them out of their reclusive home. What follows is a long trek across no-longer-relevant state lines as they seek out a community they've heard of that has limited power. This trek is full of passing friendly strangers, passing not-so-friendly strangers, dangerous dog packs, and settlements with their own set of politics and opportunities.

I always feel compelled to compare books of this sort with the first novel series in the genre neighbourhood that left an impression on me, and that's S.M. Sterling's Emberverse novels (Dies the Fire and sequels.) They both start with a similar concept, EMP or similar events that destroy technology across the world and plunge our modern world back into the dark ages, then follow small groups of people trying to adapt. So far I would say Eden is more pleasant to read in that although the science of the apocalypse isn't so far out to lunch it's unbelievable, it doesn't have the existential dread-inducing gritty convincing realness of Dies the Fire. In other words, Eden hasn't left me feeling like I'll have nightmares for a month. I read it, I had fun, I can put it down and move on rather than work through newly acquired trauma.

The psychology of this parents and one small child dynamic in this setting is interesting and well explored, particularly when Ben muses on Lila's depressive period after a series of injuries prior to the start of this book and how it temporarily changed the parent-child relationship. I would like to point out, however, that I'm not convinced by the mental state presented in Katie. I'm sure the young daughter of a pair of stubborn survivors in the wilderness who's never known any humans other than her stubborn survivor parents would be quite mature for her age and would have acquired skills we wouldn't normally require our six-year-olds to learn, but this kid is a 40-year-old woman in a first grader's body. She doesn't ask childish questions, ever. She doesn't point out a random pretty flower or bird as they walk. She doesn't talk to herself (in a creative play kind of way.) She doesn't seem to have any comfort items nor is she shown to fidget with anything. (Pebbles? Sticks? Those little wing-shaped twirly things that fall from certain trees?) She's six! Show me that she's six! Little birds are cute and wildflowers are pretty and smooth river pebbles are perfect for busy hands. Show me that she's only recently gained a complex theory of mind and have her confer with one parent about what the other is thinking rather than just presenting her as someone who already has a pretty good idea of what everyone's thinking at all times. I feel like the most concrete reminder we got that she's six was Ben's consideration for how often she would need breaks when they travelled because she's small. I also felt like some of Ben's dialogue in particular didn't feel natural. He tended to make a statement and then elaborate, but Lila and Katie didn't need the elaboration, it was just exposition for the reader.

The trio ends up temporarily settling down here and there in different communities along their migration path, and the elements of these settlements and choices these people made whenever we reached these stopping points reminded me of my middle-grade fan fiction. I would take kid-lit survival stories like Hatchet and have Brian just choose to stay in the shelter he set up and live there in the woods forever. I remember being asked to write an epilogue in class in grade 7 and I had him collect supplies in the town he was brought back to by his rescuers, peace out and go right back to where he'd been, and construct a cellar. (My teacher wasn't impressed. She wanted a re-adapting to society type thing.) The details of the settlements along the way in this book remind me of those sort of alternate endings I would write for myself back then. For nostalgia's sake, for the namaste vibe, I loved that. On the other hand, these scenes were written as brief summaries of work and decisions conducted over several days or weeks, and as such it ended up being a lot of telling rather than showing. I would not have minded more paragraphs if I could have visualized these things happening. I feel like my 13-year-old self could have written those sections exactly, and my 33-year-old self wanted more complexity. The characters got a break and a change of pace whenever they stopped and made a temporary home, but the reader breezed through it and before you know it they're on the move again. Might as well have just paused for the afternoon.

A lot of this book reads like a travel diary, so take note if that is or isn't something that appeals to you when considering this book. The narrator is Future Ben's voice recalling what Past Ben and his little family experienced just a few hours or days ago. It's passive. The narrative voice is not a separate character and the reader isn't invited to feel like the fourth human member of this travelling group. That's not at all an inherently bad thing, but some readers don't like this kind of more detached storytelling, so I did want to highlight that.

I experienced this one as an audiobook, so I do need to comment on the narrator's performance. Greg Hernandez has a pleasant voice to listen to and he was able to differentiate between Ben/narrative voice and the quoted dialogue of other characters enough to avoid confusion. Give that this book is all Ben's perspective it would be easy to lose the other characters' voices, but that was not the case, and I found it quite easy to follow. I would absolutely pick up other books for the narrator in this case, and I actually checked the Audible listing for Greg's work just now and added something else to my TBR. 5 star performance!

If you like post-apocalyptic stories, particularly ones that leave survivors in a medieval-type version of the world or books with a lot of travelling, this may be the perfect next read for your list!

--
I was granted complimentary audible access to Eden Lost by Andrew Cunningham as part of my participation in the blog tour for this title with Audiobookworm Promotions. Thank you to all involved in affording me this opportunity! My thoughts are my own and my review is honest.

Ben and Lila have made a home deep in the forest for themselves and their six-year-old daughter, Katie, seven years after the event that killed almost the entire US population, perhaps even worldwide. Their self-sufficiency became the stuff of legend but they never wanted to be seen as heroes and retreated to their own little piece of the world. They haven’t just survived, they’ve thrived and Katie is every bit as tough as her parents. Now, though, a forest fire has driven them out and they’ve decided to head for Yellowstone where a community seems to have settled.

Their journey takes the trio through some heartwarming times, meeting people who are kind and generous, but they also run into some very dangerous situations. In particular, they are confronted by a group of people controlled by a megalomaniac and his thugs. This man is certain he knows what’s best for everyone and uses the electric power he recreated to recruit new settlers, willing or not, and Ben and Lila are forced to either comply or take a stand.

Although I think there are some glaring flaws—for instance, Katie is a downright unnatural child even taking into account her upbringing, and everything I’ve ever heard about EMPs indicates that such widespread and instantaneous loss of life would be unlikely—I really enjoyed Mr. Cunningham’s story and Mr. Hernandez’s narration nearly to the end. That ending, though, brought me up short and I was truly appalled at Ben’s last action and how he justified it to himself. I can’t say any more about this because it would be a major spoiler and I suspect I’m in a very small minority; if an audio version of the third book gets made, I’ll be in line to find out how Ben’s choice plays out.

Overall I have enjoyed this book. the characters were engaging and likeable. The story a bit predictable but entertaining nevertheless. I would definitely read stories from this Author again.