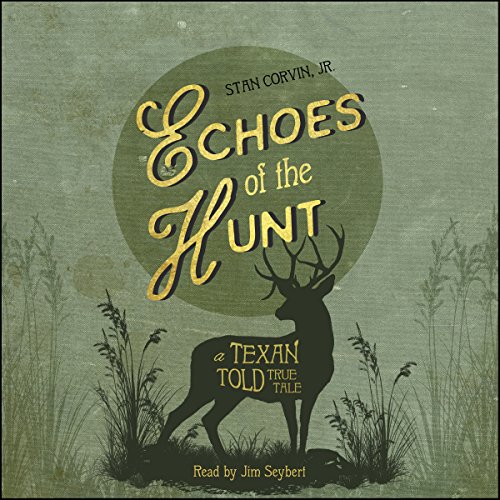 Echoes of the Hunt

By: Stan Corvin
Narrated by: Jim Seybert
Try for $0.00

Echoes of the Hunt, written by Stan Corvin, Jr., is the true story of a deer hunt he was on a few years ago in West Texas. Arriving at the ranch, he learned the owner who invited him had the flu and was not going to participate in the hunting of a massive atypical mule deer named El Viejo. For the next 10 days, Stan hunted alone for the trophy buck. Interwoven with this adventure, he tells of hunting experiences as a young boy, then later as a teenager with his father, grandfather, and uncle. Many of these memories are recalled in the evening while he is sitting in a creaking rocking chair in front of a blazing fireplace while drinking his favorite beverage.

A lifelong hunter, Stan has shot dove in Argentina, quail in Baja California, elk in New Mexico, mule deer in Colorado, and feral hogs in Texas. As a two-tour helicopter pilot serving in Vietnam in 1968 and 1971, he also hunted NVA and Vietcong enemy soldiers. That memoir is told in his third audiobook Vietnam Saga: Exploits of a Combat Helicopter Pilot published in 2017.

What listeners say about Echoes of the Hunt