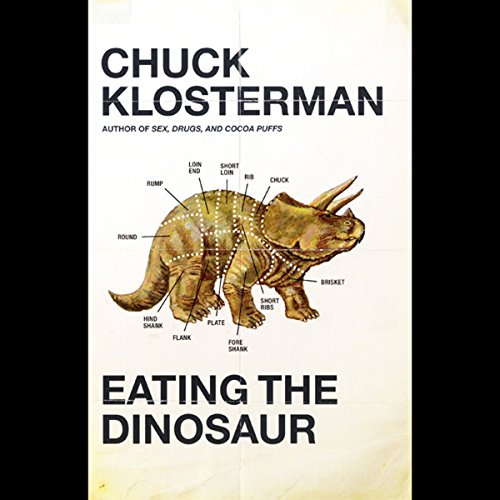 Chuck Klosterman has chronicled rock music, film, and sports for almost 15 years. He's covered extreme metal, extreme nostalgia, disposable art, disposable heroes, life on the road, life through the television, urban uncertainty, and small-town weirdness. Through a variety of mediums and with a multitude of motives, he's written about everything he can think of (and a lot that he's forgotten). The world keeps accelerating, but the pop ideas keep coming.

In Eating the Dinosaur, Klosterman is more entertaining and incisive than ever. Whether he's dissecting the boredom of voyeurism, the reason why music fan's inevitably hate their favorite band's latest album, or why we love watching can't-miss superstars fail spectacularly, Klosterman remains obsessed with the relationship between expectation, reality, and living history. It's amateur anthropology for the present tense, and sometimes it's incredibly funny.

What listeners say about Eating the Dinosaur

My friends and I listened to this book on the way out to the cabin this year. I can honestly say that Eating The Dinosaur made it the most enjoyable car ride we've ever had.

Klosterman has the gift of being able to put what we are all secretly thinking into words. Usually that talent is reserved for brilliant comedians such as George Carlin or Jerry Seinfeld, but Chuck somehow manages to take it even one step further.

SPEND YOUR CREDIT ON THIS BOOK.

Chuck breaths humanity and wit into his essays. He also cleverly has his interview pieces with the actual interviewees and other clever pieces are performed with actors. Chuck uses pop culture to delve deep into the human psyche, finding existential truth in the oddest of places. This book made my two hour commute seemingly fly by in minutes.

Humorous and philosophical essays in Klosterman's own pop-culture-writ-large idiom. Read by the author himself, and in some cases by his interview subjects (Ira Glass, Errol Morris). It's strange and interesting to hear someone reading their own remarks after the fact. Overall enjoyable, and if you've liked Klosterman's previous works you won't be disappointed. Lost 1 star just for being regrettably short, and in need of some kind of cohesive narrative (although this might apply to all his essay collections).

Not great, but Chuck does make you think

This collection of essays is a bit of a hodgepodge of narratives on pop culture, technology, and Chuck's innate observations on everyday life. There isn't a clear flow to the stories, which is annoying but somewhat intriguing all at the same time. He discusses topics ranging from the Unabomber to football, ABBA to time travel, all the while adding his unique flair of witty hipster-nerd humor. It had me laughing out loud during some parts and zoning off uninterested during others. If nothing less, this book will get your thoughts going.

Chuck Klosterman is the type of person you want to have at a bar table with you. His massive brain has dissected everything ten ways to sunday; from ramifications of time travel to cultural implications of nipple slips. His essays are fascinating, his delivery is uniquely him. Inside all of us is a hidden nerd waiting for something to obsess over, Klosterman not only accepts that nerd, he indulges it.

This book is an easy listen and you'll be sad when it ends. I was.

This is some of Klosterman's best work. Like all his good audio books, it is read by the author. Highly recommend.

What did you love best about Eating the Dinosaur?

I found this book by looking up Ira Glass in the Audible search engine, and I then found out Cuck Kosterman was part of bill simmon's grantland network. As I love both Simmons and This American Life, I figured I'd give this book a try. It turned out to be a great decision--this may be my favorite audio book so far. Klosterman is a strange mix of the two above mentioned fellows with a bit of gladwell. I think Klosterman's insights are more interesting than gladwell's and if you like his works, I'd think you'd like this book. I plan to read his entire canon.

Better then expected based on the above reviews.

Even though I enjoyed IV and generally any insightful discussion of pop-culture, I was reluctantly to buy this audiobook because of the few and generally negative user reviews. "Self-absorbed Twaddle" , "Couldn't get into it" and "Ho Hum" they said--what the f*ck, other reviewers! Clearly if you are not interested in dissecting the minutia of pop culture you have come to the wrong place--but as this sort of this goes Eating the Dinosaur is as good as anything out there excepting maybe Malcolm Gladwell at his best or the better "This American Life" episodes, but both of those are more general interest and less pop/rock obsessed, so the comparison is not entirely level. Also, there is a great interview about interviews with Ira Glass, who makes an appearance on the audio book. Don't pay attention to the negative user reviews. If you like Klosterman's other books or if you like Rob Sheffield or you just like music and pop-culture in general, you will like this book.

This book has made me want to figure out a new way to vent books before I buy them. Fifteen minutes in I thought he was going to break to read a ad for blue bonnet. But it is ok maybe the author will be able to afford a rare Herbie Hancock vinyl he can place eye level in a room so people can think he is interesting.

This book is a series of delightful neurotic NPR-esque essays that would be right at home on This American Life and they range from poignant to utterly pointless. Warning though: if you're not interested in one of his topics, eg pro sports, skip the chapter. This isn't Malcolm Gladwell who can make any topic relatable and that chapter will continue to bore you.