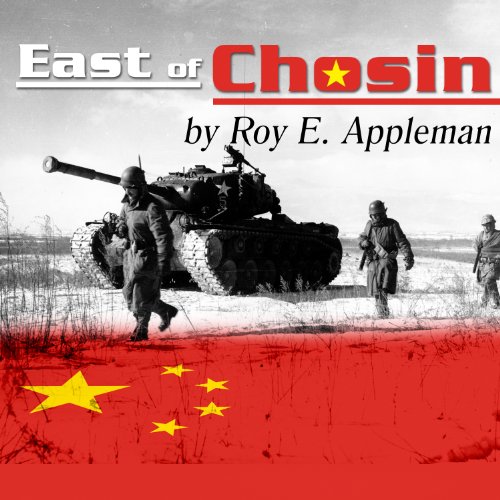 By: Roy E. Appleman
Narrated by: Sean Runnette
Try for $0.00

Roy Appleman's East of Chosin, first published in 1987, won acclaim from reviewers, readers, and veterans and their families. For the first time, there was one complete and accessible record of what happened to the army troops trapped east of the Chosin Reservoir during the first wintry blast of the Korean War. Based heavily on the author's interviews and correspondence with the survivors, East of Chosin provided some of those men with their first clue to the fate of fellow soldiers.

In November 1950, U.S. forces had pushed deep into North Korea. Unknown to them, Chinese troops well equipped for below-zero temperatures and blizzard conditions were pushing south. With the 1st Marine Division on the west side of the frozen Chosin Reservoir, the army's hastily assembled 31st Regimental Combat Team, 3,000 strong, advanced up the east side of the reservoir. Task Force Faith in the extreme northern position caught the surprise Chinese attack. With rifles and vehicles often immobilized in the cold and snow, the task force struggled to retreat through a tortuous mountain gauntlet of enemy fire. With truckloads of dead and wounded trapped along the road, a few of the 385 survivors trudged across the frozen reservoir to alert the marines to their plight.

What listeners say about East of Chosin

I read this in print shortly after it came out and have re-read it in print at least once since. When I saw it on Audible, I just had to give it a listen hands and eye free to soak it in again and follow along with topo maps of the positions and terrain.

Excellent narration - as I imagine Appleman would have approved.

I'd say this is strictly for those intensely interested in the subject as it is steeped in details and backstory. I feel Appleman objectively presents the issues well to more than allow the reader to interpret themselves what went wrong as a lot just is not known or may never be. But plenty of dots to connect.

If I went back in time, I would have told Faith and MacClean to occupy and hold hill 1221 (as the Marine Lt. they were replacing intimated) with firm connectivity between the schoolhouse to the south and the inlet, but no further north of the inlet until the reinforcements arrived....which of course, they never did.

Apologist for MacArthur and Ned Almond

I have read many books about a the Korean War and the break out from the Chosin Res. but I have never read that O. P. Smith was to blame for the debacle. O. P. Smith saved the 1st Marine Division and in any case the 1st had a hard enough time saving itself. Poor dithering Leadership, poor training and discipline and poor communications exacerbated the Army's problems but MacArthur and Almond pushed the troops into untenable positions while refusing to believe intelligence being gathered in the field. A real thumbs down on this book.

tales of heroism during mission failure

Incredible tale of heroism during an incredibly stressful and difficult part of the war that is often downplayed or Friday. It's nice to hear the true story from the people who lived it, rather than the Marine version of the Army's actions east of Chosin.

Butchered the Korean language though. You really need a map in front of you to follow along also.

It is high time the army is credited for its magnificent performance, thereby countervailing the Marines’ maligning of the army’s role. Not giving deserved credit; in fact, maligning them instead, is dreadfully uncharitable. This is blatant inter-service bullying, and must be stopped.

BTW, Contrary to Marine propaganda, the army also fought bravely and competently in the Western Pacific New Guinea, Buna, Rabaul, Philippines, Okinawa, etc.) It is myth and disservice to the soldiers to have maligned the army’s contributions.

The Marines fought magnificently during all our conflicts (Tarawa,, Saipan, Wake Island, Saipan, Okinawa, etc.), but that does not entitle them to be lionized at the expense of maligning the army.

A true story of amazing bravery and amazing errors

First the small negative - includes extremely technical maneuvers
Now the positives - the authors does a great job of researching the actions of the Army units east of Chosin
- wonderful depth of research
- a moving, factual account
- insightful analysis
- and more

As I am aware that I am writing this review for many Junior officers who seek personal professional development... this book is best listen to while following along with the actual hard copy.

There are so many lessons to be learned from this book. For me I think that the lack of communication on the battlefield is telling to the ultimate results. Furthermore, you will find that there are lapses in common sense leadership, but consider the time period wherein communication and decisions made by higher command experienced significant time lag.

It is a shame that this battle is unknown to many Americans. Learn from it! Don't repeat the same mistakes.

the truly unbelievable and heartbreaking history.

fascinating history of our American soldiers at the beginning of the Chinese incursion into North Korea. first let me note then while listening to this story is incredible it is truly best a book that should be read. it should be read while having a map of North Korea and a yellow legal pad at hand.. there is just too much listing of various units and participants and locations to keep track of all that is discussed.

what is completely obvious is the ineptitude of the higher command in preparing for and execution of the entire Chosin Reservoir campaign. the blame must begin with general Douglas MacArthur and then filter down to his commanding generals. putting together and ill-equipped and poorly trained division blame can only be placed at the top. then not recognizing and adapting to the situations on the ground. it is sad and heartbreaking to think that so many thousands love Brave and heroic American lives we're lost because of so many command mistakes. this is a book that must be read in order to honor those that died, those that survived with horrific wounds and those that suffered at the Chosin Reservoir. the memory of these Brave Americans should never be forgotten.

This is the definitive account of U.S. Army units East of the Chosin Reservoir in the last days of November 1950. It reads like a Greek tragedy. Men placed in an exposed position and abandoned or sacrificed, probably both. It also reads as a detective story in trying to find out who in the command structure was responsible for this disaster in American arms. Highly recommended.

This was very disappointing. The book seems a thinly veiled apology for X Corps commander Ned Almond's actions that set up the tragedy. Almonds overagressivness has been well documented in numerous other books that discuss this phase of the Korean War. Felt author made too many excuses for poor Army performance compared to USMC. Heaped much more criticism on Those Field grade officers involved in tragedy and not at Army Division and Corps level. Narrators monotone did not help the listener