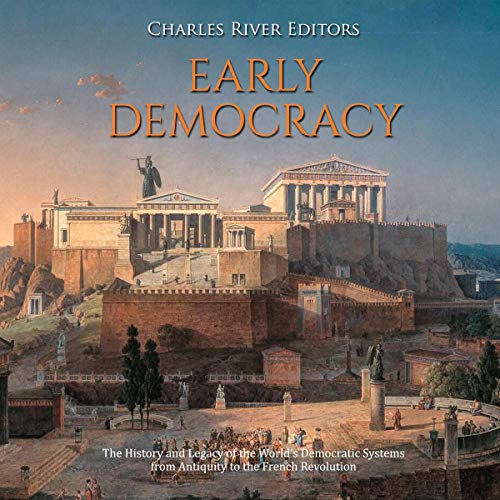 The History and Legacy of the World’s Democratic Systems from Antiquity to the French Revolution
By: Charles River Editors
Narrated by: Jim D. Johnston
Length: 2 hrs and 34 mins
Categories: History, European

In today’s modern world, every political regime, even the most authoritarian or repressive, describes itself as democracy or a democratic people’s republic. The concept of rule by the people and on behalf of the people has come to be accepted as the norm. Very few would overtly espouse the cause of dictatorship, absolute monarchy, or oligarchy as the most desirable political system upon which to base the government of any country.

It is also generally accepted that democracy, as a political ideology, began in Greece, specifically in Athens, in the seventh century BCE and reached its zenith in the fifth century under the leadership of Pericles. Dating an exact starting point is impossible, but at the beginning of the seventh century BCE, Solon inaugurated a series of reforms that began the movement away from rule by individuals, or tyrants, and by the end of that century the reforms of Cleisthenes provided the basis of the Athenian democratic system that culminated in the radical institutions introduced by Ephialtes and Pericles in the fifth century. The result was the first, and possibly only, truly participative democratic state.

Of course, not every inhabitant of Athens enjoyed the right to vote. Only full citizens could do that, and they represented approximately 30 percent of Athens’ male population, numbering between 30,000 and 60,000 during Athens’ Golden Age and declining rapidly throughout the Peoloponnesian War. The remainder was made up of metics and slaves, who vastly outnumbered free citizens and, indeed, almost all other slave populations in Hellas, a fact which the Athenians often conveniently chose to forget when singing the praises of their democracy.

There is a very strong indication that foreign chattel slaves were an utter necessity to Athens’ economy, and though they did not serve as fleet rowers as they would have done in Rome, they still carried out the myriad of unpleasant and demeaning jobs which allowed Athenian citizens the free time to actively participate in the city’s politics. In many ways, without slaves, there would have been no democracy in Athens.

The period of the Roman Republic, generally dated from 509-27 BCE, is an entirely different matter. There is significant documentation that enables historians to analyze how Rome cemented its position within the Italian peninsula before pushing ever outward to create the new provinces that formed the core of the vast Roman Empire in the third phase that came to dominate all of Europe for so long.

The period of the Republic saw those with the emerging powers having to grapple with new political situations, the administration of a diverse domain while contending with political disorder at home, commercial and financial expansion, complex issues of land distribution, the role of the military, new ideas in religion, and the emergence of new class systems.

At the same time, the Greeks and Romans would not have recognized, or accepted, any of today’s modern versions of democracy as being truly “democratic”. A rejection of dictatorships masquerading as democracies would be understandable, but the ancients would have been equally scathing of Western-style representative democracies that they would, undoubtedly, have seen as anti-democratic. The key to democracy, as far as the Greeks and Romans were concerned, was active participation by the citizen body in all political aspects of life.

Early Democracy: The History and Legacy of the World’s Democratic Systems from Antiquity to the French Revolution traces the formation of democracy from prehistory to the notorious French Revolution that cast off the ancient regime.