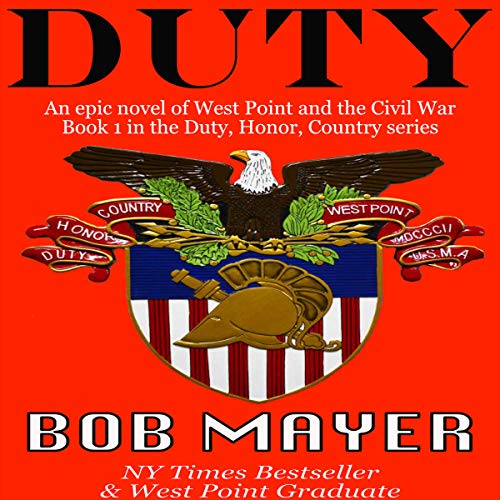 This is book 1 in the Duty, Honor, Country Trilogy.

They swore oaths, both personal and professional. They were fighting for country, for a way of life and for family. Classmates carried more than rifles and sabers into battle. They had friendships, memories, children and wives. They had innocence lost, promises broken and glory found.

Duty, Honor, Country is history told both epic and personal so we can understand what happened, but more importantly feel the heart-wrenching clash of duty, honor, country and loyalty. And realize that sometimes, the people who changed history, weren't recorded by it. In the vein of HBO's Rome miniseries, two fictional characters, Rumble and Cord are standing at many of the major crossroads of our history.

Our story starts in 1840, in Benny Havens tavern, just outside post limits of the United States Military Academy. With William Tecumseh Sherman, Rumble, Cord, and Benny Havens' daughter coming together in a crucible of honor and loyalty. And on post, in the West Point stables, where Ulysses S. Grant and a classmate are preparing to saddle the Hell-Beast, a horse with which Grant would eventually set an academy record, and both make fateful decisions that will change the course of their lives and history.

We follow these men forward to the eve of the Mexican War, tracing their steps at West Point and ranging to a plantation at Natchez on the Mississippi, Major Lee at Arlington, and Charleston, SC. We travel aboard the USS Somers and the US Navy mutiny that led to the founding of the Naval Academy at Annapolis.

We end with Grant and company in New Orleans, preparing to sale to Mexico and war, and Kit Carson and Fremont at Pilot Peak in Utah during his great expedition west.

“A treat for military fiction readers.” (Publishers Weekly)
“Mayer has established himself as one of today's better military writers. A background in the Infantry, West Point and Special Operations gives him credibility and understanding from having been there and done that.” ( Airpower Journal)

What listeners say about Duty

While this is not the type of story I would typically go to, it did a great job in many things. I love history, and Mayer's connection to that and the early days of West Point clicked well. The use of Grant and other historical events, places and names serves as a backdrop to other characters he created. It makes for a very believable fiction story with some really great factual ties. Reading this will make you want to read up on this period in history even more. I'm looking forward to book two in this trilogy.