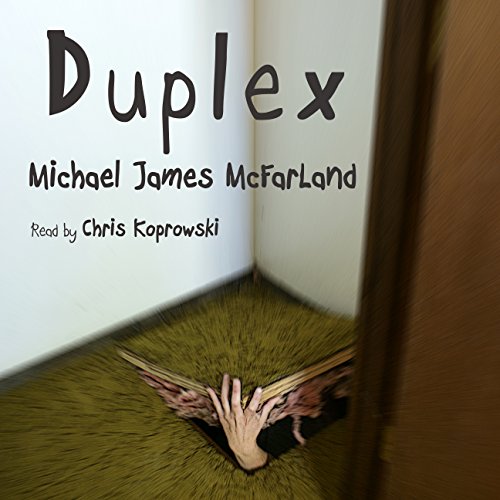 By: Michael James McFarland
Narrated by: Chris Koprowski
Try for $0.00

Accepting a job in a new city, Dan Hill has just moved his wife and four-year-old daughter into an ordinary-looking duplex. The appliances are avocado, the carpet sea-foam green, and there's a fine layer of ash below the surface from the house that used to stand there.

"Well that's a funny thing," the Hill's new neighbor tells Dan. "The house caught fire and the oldest boy thought his sister was still inside. He went in to get her, but never made it back out. The rest of the family - the little girl included - all came through with relatively minor stuff: scrapes and bruises, smoke inhalation.... It was just the one boy who died, burned up...14 or 15 years old, I think."

He let the story trail off, shaking his head.

"Not the sort of thing they like to advertise, is it?" He leaned back into his lounge chair, considering the small border of earth around the patio. "It's here though, if you dig. I put in those cedars last month," he said, pointing at the small line of shrubs. "Digging the holes, I noticed a lot of ash and some burnt slivers of shingling." He took a long sip off his beer. "Makes you think about where you're sleeping, doesn't it?"

Awakened by strange sounds in the dead of night, the Hills soon suspect someone is prowling about their new home, vanishing when they switch on the lights. Little things go missing: spoons, hair ribbons, a black bra...bits of food from the refrigerator. Frustrated, Dan sets up a video camera in hopes of capturing the intruder on tape.

Less than a week later, his wife and daughter disappear.

Dan retrieves the camera from its hiding spot and plays back the tape....

What he sees turns his blood to ice.

Michael James McFarland peels back layers of the human psyche to expose what happens when our worst fears really do come true.

Warning: This novella contains graphic material and is not intended for listeners 17 and under.

What listeners say about Duplex

I personally loved it!

Scared the hell out of me. Creeped me out good. Something about this story really got under my skin. Maybe it was my natural aversion to crawl spaces. Or my fear of being buried alive. Or creepy spider people. I really wish the author had more on audible. It was a great idea.

This book is truly bizarre Dan being trapped under the house his wife and daughter prisoner the story has twists and turns that makes you want to keep reading or keep listening until it’s finished which I did of course. Excellent book by Michael MacFarland excellent narration by Chris Koprowski. This book is great story is some thing that kind of appeals to not everyone but those of you who like bazaar happenings.

What a gripping and part realistic terrifying story. Talk about suspense! I felt like I was fighting for my life with the characters. This is the story of Dan Hill and his family who move into a Duplex house. It is temporary while he starts a new job. What they hope is an exciting new start turns into a terrifying ordeal. I won't give too much away because there is so many surprises. This story is full of suspense. I had no idea what was going to happen. There also was a small paranormal element to it that I loved too. You will be hooked from the start to finish while this family fights for their life against a psycho. It will make you question who you can trust. This narrator did a great job bring the story to life from the characters points of view. At times I forgot I listening to it. I felt like I was in it! This is a must read/listen for suspense and thriller fans.

An interesting mystery with a supernatural ending.

The beginning got me to think this would be the typical horror story in which a ghost coming out of some kind of recording. Nevertheless, the story surprised me many times throughout the book; even at the end.

The story has several twists and turns you were not expecting, so it keeps you hooked and makes it hard to stop listening.

The characters feel real and distinctive from each other.

However, there were two aspects I personally didn't like. The first one was the appearance of a supernatural solution to the las problem stated in the story. The second aspect was that there were a few key aspects left open, there being no closure or solution to them.

On the other side, there was not much difference among characters or emotions on the voice of the narrator.

It was certainly an entertaining and interesting read.

This has great ingredients of creepy horror movies, and some plot twists I was definitely not expecting. The characters are fairly well developed and identifiable.

My pet we’ve: weird, long pauses between chapters. I kept wondering if the book had ended, and I would be reaching for my phone and opening if by the time it got to the next chapter. I’m not fast and that was at 1.3x.

The narration itself was fine, a bit slower than I prefer, but that’s adjustable.

This was a really good story.After moving into a new home,the young daughter is assured that the crawlspace is nothing to worry about'.It turns out Daddy is wrong. Chris Koprowski was a good narrator,though I thought he lagged sometimes.I wasn't sure if the dead air sound between chapters was a mistake or for effect.I was given this free review copy audiobook at my request and have voluntarily left this review.'

When Dan gets a new job, his first move is to move his family into a new home. A cheap duplex. It’s the only place like it in town, but Dan doesn’t think much of it, figuring that they won’t be there long before they find a more permanent place to settle in. The neighbors are nice, but in the blink of an eye, something seems wrong. Then his family disappears.

Although the characters aren’t developed fully, the story is very creepy, and the plot moves along fast. It brings a full punch of chills within only three hours.

Narration was done well though there were a few distracting background/mouth noises.

Duplex is a 3 hour short story that makes you think your dealing with one kind of monster, when it turns out to be a different kind of monster. I enjoyed the story, It flowed smoothly. The plot and characters were good. The narrator did a great job.

Great, but change the cover image!

Duplex by Michael James McFarland is a super fun, creepy, quick listen. I was a little bummed by the cover art though, as it gives part of the story and surprise away a bit sooner than it would have been revealed otherwise. This is the story of Dan Hill and his family (wife and daughter). Dan gets a new job and the family moves into a rental duplex until they have time to settle and find a place. The neighbor seems nice and everything seems to go well at first...Although a quick listen, I really enjoyed the story. The characters aren't super developed, as this is more of a novella versus a full novel. I'd definitely enjoy listening to more stories by this author!

Chris Koprowski did a great job narrating this novella. He definitely bright life to the characters and added to the story as a whole. I enjoyed listening to him. I was voluntarily provided this free review copy audiobook by the author, narrator, or publisher for an honest review.

Not a tough who done it but alright - may contain spoilers

I really wanted to like this book more but actually the cover art and first few chapters gave a lot away.

The characters were not too developed but it was more of a short story.

Survival books, movies, etc ramp up my severe claustrophobia but the adrenaline is good!

The narrator did a fairly decent job but could have used a beta listener for technical issues such as mouth noises, hesitations, and general flow.