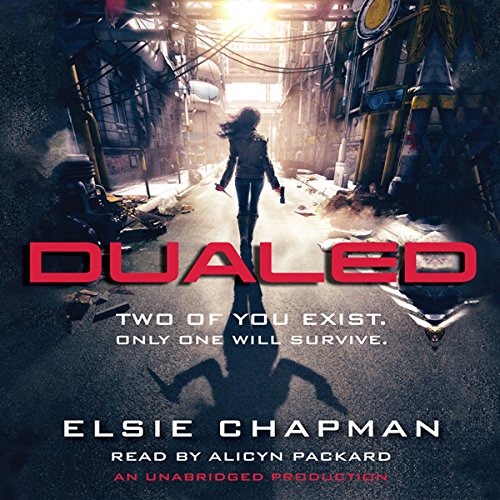 By: Elsie Chapman
Narrated by: Alicyn Packard
Try for $0.00

The Hunger Games meets Matched in this high-concept thriller where citizens must prove their worth by defeating the other version of themselves - their twin.

Two of you exist. Only one will survive.

West Grayer is ready. She's trained for years to confront her Alternate, a twin raised by another family. Survival means a good job, marriage - life.

But then a tragic misstep leaves West questioning: Is she the best version of herself, the version worthy of a future?

If she is to have any chance of winning, she must stop running not only from herself, but also from love...though both have the power to destroy her.

"A gripping, thought-provoking thriller that keeps your heart racing and your palms sweaty...The kind of book Katniss Everdeen and Jason Bourne would devour." (Andrew Fukuda, author of the Hunt series)

"Full of unexpected turns...Fans of the Divergent trilogy will want to read this imaginative tale." (VOYA)

"A fast ride from first to final pages, Dualed combines action and heart." (Mindy McGinnis, author of Not a Drop to Drink)

What listeners say about Dualed

The main character is insufferably whiny, constantly makes unbelievably stupid decisions (while admitting they are stupid), and the rest of the book is filled with endless descriptions of things I couldn't care less about. I finally gave up and started fast-forwarding when the author started yet another 5-10 minute description of a street or house or light on stairs.

Also, SPOILER, if you expect this to be a YA dystopian novel where the protagonist overthrows or fights a terrible system, SPOILER: that doesn't ever happen and the characters just go along with the system and even validate it.

Annoying book, I almost gave up and stopped listening, but kept listening just due to the hope that the character rise up ... disappointed.

That feeling when Katniss would go on and on about Gale or Peeta and you'd roll your eyes wishing they would just get on with the story........generally sums up this whole book.

Dualed is the type of book that created an ambivalence in me; on the one hand, there are quite a few items in there that bucks YA dystopian trends (she's an assassin, for example, and by definition, NOT a unique snowflake). But on the other hand, yet again we have a 'too good to be real/never gets upset' and 'ignore best advice and do your own thing' syndromes. What keeps this at a firm 3 stars for me is that a lot of the middle feels like filler to flesh out a basic premise.

Story: West lives in a post apocalyptic society where each person is created with an exact duplicate. The society prides itself on defense preparedness and a competition in the teen years means that every 'partial' will eventually have to kill their duplicate in order to become complete and join society. West has lost most of her family to partial kills or from collateral damage of someone else's kill. Alone, she chooses to become a Striker, an assassin for hire to take out other people's duplicates. She hopes this training will prepare her to face her own trial/assignment; which comes sooner than she would have hoped.

Honestly, after the premise of the story is revealed, I expected a long drawn cat and mouse where our main character would have to outwit her opponent. Instead, West spends most of the book avoiding having to meet up with her duplicate and being saved by her love interest, Chord. This was problematic since the problem of her duplicate was far more interesting than her becoming a Striker/assassin. Indeed, the author failed to show any 'training' she received as a result of being a Striker (she was thrown out into assignment immediately) and perhaps the only thing she learned was that hesitation is deadly. But really, the experience of killing a 'hit' was different than killing your duplicate/alt since you can blend as a Striker but everyone knows when you are in the middle of your assignment to kill your alt.

I had expected we would get a lot of morally-hesitant kills (e.g., killing bad people or people who 'deserved' it) and was pleasantly surprised the author refused to take the easy route. But with West's own alt, I felt it would have been better to make her a more sympathetic (or even better) character than alt. That would have put a lot more ambiguity and better message about the dystopian society. Instead, if West kills her alt, she can say she was the worthy one - and the dystopian society's policies become sound and sanctioned.

In the end, the conflicting messages (dystopian killing society is right), daring plot devices (she kills innocents!), and lack of logic (if you do something to get training in weapons/killing, then GET the training already) make this a solid 3 stars.

Note: I listened to the Audible version of this story and the narrator did an excellent job.

Fantastic dystopian concept with moral qualms, heart thumping action, tragedy & love, but at the end, I was left disappointed. Government corruption was alluded to but never addressed, moral questions were raised but never processed. The main character contemplated these issues then they were forgotten, lost in a love story.
A great dystopian novel wouldn't gloss over and pretend the government corruption is acceptable or that the main character is perfectly content to have complied with that corruption.
Here are the facts:
1) The government brings together 2 couple's DNA to create twins (called alts) who are separated at birth and raised in completely different environments, supposedly because there is not enough resources for both alts- though parents seem to be able to register for as many children as they want (West's parents had 4).
2) Each alt is raised and at the age of ten they begin training in weapons & defense which is when they can officially become 'active' in their assignment to find & murder their alt at which point they become a 'complete.' Completes receive better treatment than those who are 'Incomplete,' almost as if they are second rate humans until they have reached Complete status.
3) The Alt who murders first is the more perfect version and the one who dies is undeserving of Complete status. However, the main character struggles with this idea since 2 of her siblings were killed by their Alts and she can't process how they could have been undeserving, and their lives meaningless.
4) The main character then overcomes her feelings of undeserving, conforms to the government's rules, completes her assignment as per activation instructions, and lives happily ever after with her love interest despite her entire family and his having been killed due to this practice.


Would you ever listen to anything by Elsie Chapman again?

Probably not. Her ideas are amazing, but she left me with a feeling of unresolved tension. Important moral questions were obvious in her book Dualed, where twins are required to hunt down and kill one another for the right to be a 'complete' member of society, but she focused on the love interest of the story.

Which character – as performed by Alicyn Packard – was your favorite?

I enjoyed Cord. Alicyn did a great job of voicing characters' emotions during her reading which drew me into the story.

Elsie's book dualed was really worth it. Every chapter of the book builds very well towards the climax, and the connection between the reader to the Protagonist made me really want to start writing. So definitely a 5 star story.