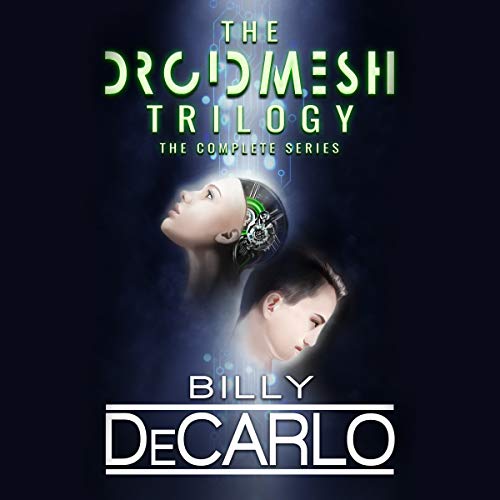 Dive in and enjoy the DroidMesh Trilogy boxed set!

Book 1: All work and no play makes an android a dull toy.

The remnants of human civilization create their own utopia on an alien planet. A brilliant robotic scientist breaks the rules in an attempt to make his impaired son whole. Meshing android and human minds is considered impossible, a societal taboo, and illegal.

Can the sorrow of a father, the challenge of a feat never accomplished, and the promise of normalcy for a son who has never known it motivate a man beyond his ethical boundaries? What happens when it all goes wrong?

Book 2: The essence of a robotic scientist's late wife now exists in one of his sentient creations. A firmware flaw has surfaced in an overly ambitious project to mesh android and human brains. The android population on Novae Terrae now have human emotions - and human flaws. Robotics scientist Harley Harris wants a peaceful coexistence between both groups, who share a planet that humans have escaped to during the apocalypse on Earth.

The androids, led by a gynoid who schemes for Harley's heart, have their own plans.

Will Harley Harris choose the android over his human love interest? Is it really love that she's after?

Book 3: Hell hath no fury as an android spurned.

The remnants of humanity and newly awakened, sentient androids of Novae Terrae have come to an uneasy truce. Robotics scientist Harley Harris has sorted out his relationship issues, leaving behind an angry former partner.

Will the peace hold after the androids come to the artificial intelligence-driven conclusion that humans are inferior and unnecessary?

It should have been labeled, "for juveniles"

A perfect example of why authors should never narate their novels. This series was difficult to finish, offered nothing new and is written at at 4th grade level. Summed up in one word : terrible.