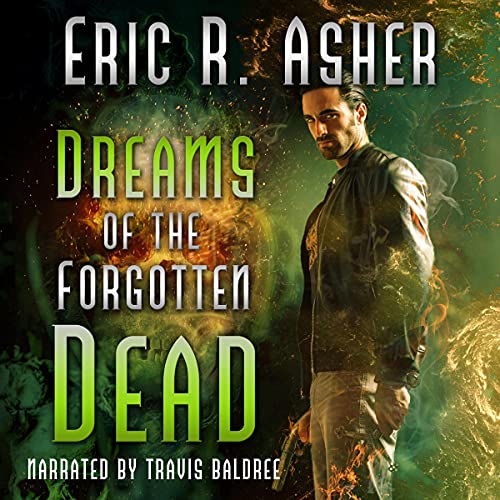 Dreams of the Forgotten Dead

By: Eric Asher
Narrated by: Travis Baldree
Try for $0.00

A hope lost. A fury reborn. An ancient warrior awakens.

Damian Vesik is back.. but his time in the Abyss changed him. As he grapples to understand his oddly fluctuating powers, a call from his trusted mechanic, Samir, is the last thing he needs. But the strange occurrences at the autobody shop can’t be ignored.

Calling on Nixie - and a rather odd gift from a water witch clan - Damian uncovers a dreadful creature haunting Samir’s shop. Knowing he can’t face a basilisk in his current state, his only option is to seek out Gaia in his quest for answers.

Yet as destruction closes in on St. Louis, the only hope of salvation could be the ghost of an Utukku...one who is downright cranky about being dead.

What listeners say about Dreams of the Forgotten Dead

I have to admit with all honesty, that I was dreading the release of this book. Everyone who has followed this story through the first 8 books knows that sadly lost the original narrator, William Dufris in 2020. Amazingly (truly amazing!) a new narrator was found to carry the franchise through the next "evolution" of the story. Now, Travis Baldree steps in to be the voice of the misfits, AND HE NAILS IT! How he has taken the nuances of the characters, given them HIS spin, yet kept them the way Dufris presented them is beyond me. Don't care how, doesn't matter, he did it.

As always the story is engaging, funny, and full of the antics of Vesik and his "crew", as well as re-introducing a very minor character into a greater role.

Get the book. Get all 19 of them. They're fun, they're full of friendships, trials, and drama. And fun, don't forget the fun. (Why do I wish I could insert Graybeard's squawk here?)

I have missed Damien's snark and quick wit. I had my doubts that he would survive the Book of the Dead series, but thankfully Damien did. I'm so happy to have the new and improved necromancer back in action. Dream of the Forgotten Dead continues where the prior series left off. Vesik is adjusting to his new stronger powers while battling a couple of basilisks! The action, wit, and characters we readers have come to love were all present.

Travis Baldree had some big shoes to fill stepping in as narrator but I am pleased to say he did so seamlessly. The story booms to life in the unique however similar voices we have come to love.

This book is like getting reacquainted with an old friend. The story line is consistent with all the others and is a joy to listen too. The new characters are fun and interesting.

The new narrator does a fine job, especially with the foriegn accents.

This has sparked my desire to go back and relisted to all the stories.

it's a bit different yeah, some voices are better while others I feel a little weaker. but it all just takes getting used to.

now for the book. it's great. and fun. the stakes are high as always, but the scale is smaller. like the start of a new season. it's familiar while still moving things forward. you've make it this far into the series... of course you are going to listen to this one too!

I'm so happy Damien is Back and Travis does a great job taking up the reign. I am also thrilled that now he has a new friend to help fill the loss, yay Nugget

With the exception of the loss of the original narrator, listening to this has been just like coming home to old friends. It is a little ironic that now that Damien has been through so much he now sounds younger, but overall the new narrator is great.
The story! it is so nice to have a "run of the mill" monster for the parts of this marry band to come together and fix mixed with the usual levity that comes with Damien being back in the main story. They have been though so much with all of the novellas each getting their own moment to shine, and here we are seeing them reaping the fruit of their labor and having their friend back.
The Vesik universe has grown quite large and while not every character got to be highlighted in this book, the writer makes a nod at some point to each and everyone of them to let us all know they are still there, still safe, living their own lives, just waiting their turn to come back around once Damien is all settled in his new home.
The closing of this novel absolutely warmed my heart to see this band of friends, forged into family, sitting around and eating and drinking as family does simply to enjoy each other's company and relish in the good times because you know in the Vesik verse there is always something just around the next corner.