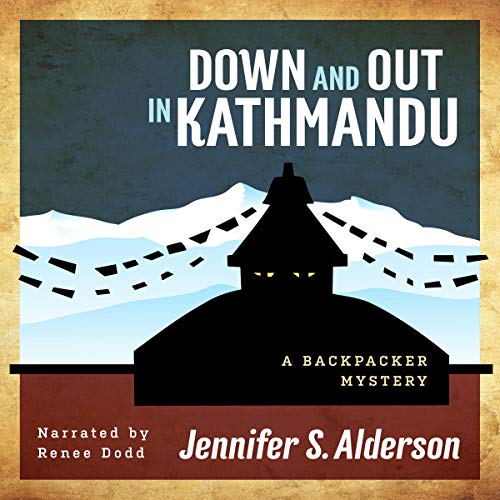 Down and Out in Kathmandu: A Backpacker Mystery

By: Jennifer S. Alderson
Narrated by: Renee Dodd
Try for $0.00

Zelda wants to teach children English and “find herself” in Kathmandu. Ian wants to get stoned and trek the Himalayas. Tommy wants to get rich by smuggling diamonds. How their stories collide will leave you on the edge of your seat!

Travel from the dusty, tout-filled streets and holy sites of Nepal to the sultry metropolises and picture-perfect beaches of Thailand, as Zelda and Ian try to outsmart the smugglers and escape Asia alive.

This fast-paced, thrilling travel mystery set in Nepal and Thailand is sure to captivate listeners thirsty for some armchair adventure. Down and Out in Kathmandu is the perfect book for lovers of dark comedy, backpacker fiction, and (mis)adventure novels.

This novel is a prequel to the art history mysteries Zelda Richardson gets involved with later in this series. All four mysteries in the Adventures of Zelda Richardson series are stand-alone novels and can be listened to in any order.

What listeners say about Down and Out in Kathmandu: A Backpacker Mystery

Down and Out in Kathmandu

I had to check the genre tags a few times while listening to this book. This wasn't a mystery, there was nothing mysterious going on. Nothing to unravel. 80% of the book was Zelda complaining about the volunteer teaching situation she was in and the people she was surrounded by and Ian smoking up. The only suspenseful piece was at the very end of the book and that lasted a few pages.

This book was more a journey of a couple of people in a poor foreign country for a couple of months who talk about their experiences. Then-something-happens-the-end.

The writing was good... I didn't hate this book, but it was not what I expected when reading the synopsis and some reviews. I was really confused for a while, I kept expecting something to happen and it never really did. There was nothing fast-paced about this book. If you want a cozy mystery without the mystery then this might be a good book for you.

Down and Out in Kathmandu (Zelda Richardson Mystery #0), my first enjoyable mystery/suspense read from author Jennifer S. Alderson. Well-written with captivating & intriguing characters. Sometimes a book is just enjoyable, wait no spoilers here, buy the book, read & review the book. "I received a free review copy of this book and am voluntarily leaving a review." I look forward to Holiday Gone Wrong (Zelda Richardson Mystery #.5). I'll definitely be reading more from this author. (RIP Marley January 20, 2014 - July 24, 2018).

Down and Out in Kathmandu by Jennifer S Alderson is an original story, I like the character of Zelda, but had trouble getting into this book. The references to all of the drugs and usage turned me off. The author did a great job with the imagery and painted a great picture for my imagination. Renee Dodd did a great job with the various character voices. I could hear who was speaking. I requested this review copy audiobook and have voluntarily written this review.

This is an original story in a time when so many are derivative. It is well written, with engaging characters. I persevered to near the end, but had to give up due to the awful narration. I would not have stuck it out so long, except the author gave me a free copy via Bookboom in exchange for an honest review. The narrator’s regular voice is fine, but she absolutely cannot voice accents other than her own. This is a big issue here, since one of the main characters is Australian (it was impossible to be sure about that until it was confirmed in the writing). The voicing of him and other characters, some of whom were Indian, are so far off as to be painful. I recommend reading the book.

Money seemed to be the most worshipped..

Love the cover.
In the review of her own story, author Jennifer Alderson describes her book, Down and Out in Kathmandu, as, 'a somewhat silly, slightly cynical, travel adventure story,' and wonders if she has succeeded in providing the reader with this. Absolutely! Two twenty somethings meet in the visa queue at the airport to enter Nepal, neither having had the foresight to equip themselves with one before travelling. Zelda, from Seattle, is a successful computer programmer who still doesn't know what she wants to do with her life. So she'd quit her job for three months of volunteer teaching the unfortunate in Nepal. Ian, from Australia, is a teacher, and he knows exactly what he wants: to fill his sabbatical with some tracking (but not too much) and the lots and lots of cheap drugs friends have told him are easily available there. Both, but especially silly Zelda, are somewhat naive, self pitying and, again, in Zelda' s case, almost perpetually whiny. Had they been teenagers, just freed from parental apron strings, they would still have been pathetic, but understandable. In mid to late twenties? Then there's Tommy, a Canadian, based in Thailand who has fallen in with a smuggling operation.

There is very little traveling in this story, although there are momentary glimpsess of the Nepal experience, the teeming streets, tottering buildings, animals, colour, smiling faces and smells. But not enough. There's far more scent of pot wafting through the cafe. And Ian and Zelda's relationship felt force and unrealistic. Plus where, exactly, was the mystery promised in the title? Beyond Zelda's experience being nothing like the one she had anticipated, blogging really adventurous happens until close to the ending when there is a flurry of excitement and action.

So much depends on the narrator for the successful presentation of an Audiobook and, sadly, despite the pleasurable timbre of Renee Dodd's mellow voice, combined with good intonation and clear reading, her Australian accent when voicing Jan was so dreadful, this reader cringed at almost every. syllable. Still, and surpisingly, it was a pleasant read, and my thanks go to the rights holder who, at my request via Audiobook Boom, freely gifted me with a complimentary copy. Would I recommend this book? Yes, but only to a young adult intent on taking the far Eastern backpacking trail of discovery for themselves as a warning to go without unrealistic expectations.

Travel from the dusty, tout-filled streets and holy sites of Nepal to the sultry metropolises and picture-perfect beaches of Thailand, as Zelda and Ian try to outsmart the smugglers and escape Asia alive.
enjoyed this book very much