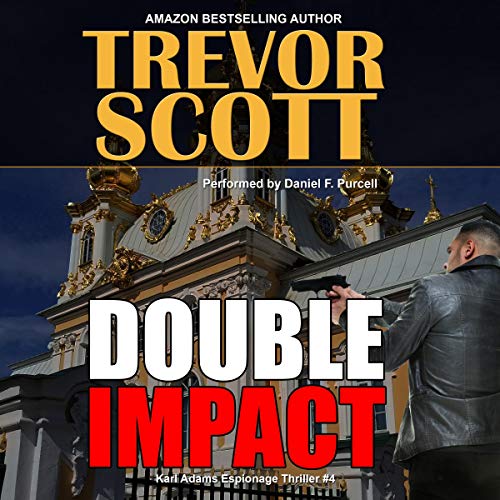 By: Trevor Scott
Narrated by: Daniel F. Purcell
Try for $0.00

CIA officer Karl Adams has become a Russian SVR officer. He is also living with a beautiful GRU officer in Moscow, the daughter of the general in charge of the GRU, general of the army, and minister of defense. He is now undercover so deep that his own agency has no idea what he’s doing.

The CIA has resorted to old-school dead drops to contact Karl. The Russians are actively recruiting agents worldwide, but especially across the Baltic region, attempting to build hegemony over former satellite states. A sequence of events brings intelligence officers on a path toward Russia, where Karl and his girlfriend are currently recruiting a network of agents that could influence operations across the world.

Now, Karl has a major dilemma. If he does his job with the SVR too well, he could undermine his position in the CIA. But what he uncovers in the old Russian capital of St. Petersburg could change the delicate balance of power between East and West.

“I enjoyed it very much...akin to Ludlum and Higgins...your background and writing skill should make this one a slam dunk.” (Dale Brown, New York Times best-selling author)

“Nonstop action and intrigue from the first page! Get this book and enjoy the thrill ride!” (Scott McEwen, number one New York Times best-selling co-author of American Sniper on Cyber Shot)

“Watch out Jason Bourne, you had met your match with Jake Adams!” (Suspense Magazine)

“Not as technical and certainly shorter than Tom Clancy’s books but can be read in lieu of them.” (Library Journal)

“Author Trevor Scott takes us on a thrill ride full of spycraft, geo-political espionage, advanced weaponry, treason, and a man’s fine appreciation for the female body, even when its owner is a stone killer.” (Jules Brenner, Mystery Scene Magazine)

“While the story is almost too close to reality...kudos to Scott for a job well done and expectations of more to come.” (AudioFile)

What listeners say about Double Impact