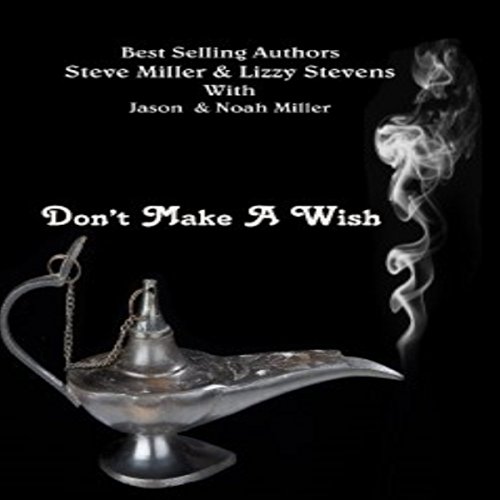 This book has two short stories in one. The first one is "Don't Make a Wish". Written by international best-selling author Lizzy Stevens her husband Steve Miller and their two boys Jason Miller and Noah Miller.

Tara's day goes from bad to worse when she finds a lamp while cleaning out her grandma's attic after she died. She found an old lamp with a note attached. "Whoever finds this lamp, Take my advice. Do not rub the lamp. Do not make a wish. Put it back where you found it and run away." Tara thought her grandma was just making a joke until she accidently rubbed the lamp and the genie popped out. Mark, the genie of the lamp, was not very happy to be a genie any longer. He wanted out of his life. So what he did to show that he wasn't happy was that no matter what the person wished for he would twists and turn the words of the wish and make it a little more fun for him and not so much fun for the person who made the wish. After two wishes went in the wrong direction, Tara wished to be left alone, which in turn, Mark sent her to a deserted Island. He thought he was being his usual funny self until his punishment was to be sent there with her, but he was sent without his powers. How will this all work out for Mark and Tara? How will they get off the island without his powers?

All of the proceeds of this book will be given to the Epilepsy Foundation. The national office accepts direct donations via mail at:

What listeners say about Don't Make a Wish