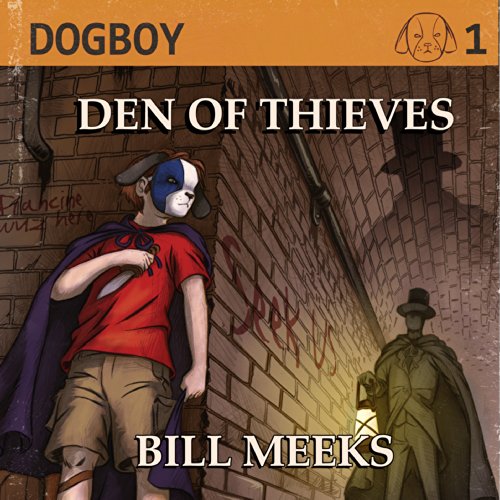 By: Bill Meeks
Narrated by: Nathan Beatty
Try for $0.00

Dogboy, aka Bronson Black, is Colta City’s 13-year-old superhero. When his parents die in a car accident he’s left in the custody of his mysterious Uncle Randolph. Using his magic kit and a strange precognitive power he protects the city from Andrus and his Guild of Thieves.

Along the way he befriends Cindy McNeil, a wannabe reporter with a secret of her own, and Mr. Horum, his boss at The Old Curiosity Shop.

When the guild captures Dogboy he must decide whether to join them or take them down once and for all as he embraces his destiny as one of the "good guys."

What listeners say about Dogboy

A grand adventure for young and old alike!

If you could sum up Dogboy in three words, what would they be?

At it's core it has several very good and important life lessons for the younger folks and older ones will find themselves transported to a younger time.

The finale in the park has so many neat little pay-offs.

Ever fantasize about having super powers and saving the day? I have and this story helped me revisit that part of myself again and I really enjoyed that ride.

What was one of the most memorable moments of Dogboy?

It definitely gained momentum as the story went, which is what you want. It started out interesting, took some meandering side trips (or so it seemed), and seemed to jump around a couple of times (but perhaps that was me getting distracted), and was most enjoyable for the last hour as various pieces of the story clicked into place.

Would you listen to another book narrated by Nathan Beatty?

I don't know. Nathan had some excellent character voices. There was something odd about his reading of the narrator, however. I couldn't quite put my finger on it, but it was a bit distracting. At times, I thought perhaps he was doing a "cold reading", but his expertise with the character voices eliminated that possibility.

Highly recommended for children around 10-12, particularly boys. It's not necessarily a book adults will enjoy as much as children, but it's a fun ride anyway.

What made the experience of listening to Dogboy the most enjoyable?

This was a great listen for almost all ages. I loved it and I think this book would have a wide audience range.. I could see this as a TV series. I received this audiobook free of charge in exchange for an unbiased review.

What was one of the most memorable moments of Dogboy?

I think whenever Bronson's dad, after the car wreck told him to get out his wallet and Bronson saw his own picture that his dad kept of him and told him to get the key out from behind the picture. Bronson was able to see what the key was for.

Well, not one single moment but rather the whole story as I really think this could be a TV series.

Nathan Beatty is a really good narrator. I love every character he did. They were all very distinct including when he was 'being' the narrator. All the characters were very, very well done!

Great start to a new series

Would you consider the audio edition of Dogboy to be better than the print version?

Both versions of this story are great. If you can't have the physical version with you the audio book is the way to go!

My favorite characters would have to be Bronson you instantly connect to him right away and I also love Mr. Horum. He takes an interest in Bronson almost right away.

Have you listened to any of Nathan Beatty’s other performances before? How does this one compare?

Yes. This one is just as fantastic as the other performances that I've heard him do.

The scene in the beginning where Bronson learns his fate.

Great series that I would recommend to anyone. Looking forward to reading and listening to more further adventures of Dogboy.

I’ve been thinking about this story a lot. On the one hand Dogboy: Den of Thieves Book 1 was well written and narrated though admittedly the narration was simplistic, but then again, I believe it was written for a younger audience (approximately 8-15 year olds) and they would find it to be just right for them. I also believe the production of this program was well done. I’m sure my boys would love to listen to The Dogboy Adventures and then use magic tricks to become the new superheros of the neighborhood. Truly, this story could inspire a great deal of fun for family and friends….hmmm, I’m going to have to figure out costumes now.

On the other hand audiobooks bring the written word to life and this story had a few very dark scenes that might upset young children, i.e., 13 year old Bronson Black’s parents are killed and he must go to live with his very evil uncle Randolph who cares not a bit for him. Yes, I know this happens in real life but the issue is worth mentioning because the things that happen to Bronson would be frightening. If a parent of the very young listens with them then the point is likely moot.

With that being said, overall it’s a sometimes serious, sometimes humorous story about a boy who takes up magic after the death of his parents and uses the magic to become “Dogboy” and save his community. There are quite a few twists along the way but this young superhero is able to work through them while uncovering the mystery of his magician father. I cried a little, I laughed a little, but most of all I did enjoy listening to this first book of I imagine many more to come.

Bill Meeks has a good start on this new series and narrator Nathan Beatty does a fine job of bringing Dogboy’s adventures to life. I think the artwork for the cover shows the artist to be very talented and understanding of the story, and I like it.

Would you consider the audio edition of Dogboy to be better than the print version?

Move over Spiderman, your time is done. Dogboy is here! What I loved best about Dogboy is that he does not have radioactive powers or futuristic mechanical devices. Yes he does have developing mystical powers, but his base character is one who has to develop his skills based on his interests and knowledge. He has to PRACTICE real skills that anyone actually could do!

It is fresh, and while aimed at a younger YA audience in my opinion, I didn't matter to me, and was still fun listen.

I often cast actors that I know in various parts of a book for my inner voice. Nathan brings his own cast, with excellent, interesting and consistent voices, so my work is much easier. I just have to enjoy!

This is a book that I wanted to listen to consistently over number of days, deliberately listening to this over the radio while driving.

Highly recommend and I am looking forward to the rest of the series.This audiobook was provided by the author/narrator/publisher free of charge in exchange for an unbiased review via AudiobookBlast dot com

Good story, but sometimes a bit disjointed. Basically how an ordinary boy learns to become extraordinary at a difficult time of life. Definitely recommend it.
NB is and OK narrator but seems a bit flat, or maybe disengaged.
The book was free, and the review honest.

This was a great middle grade read for boys. Really interesting story with plenty of twists and turns.

The narrative switches between several characters, it helps make for a more well rounded tale. You really get to see what each person's motivations are throughout the book.

There are several plot points that are lefts vague, no real explanation of the powers. Where do they come from? Why do only some people have them? What was the back story of Bronson and Cindy?

I listened to the audiobook narrated by Nathan Beatty, who does a great job with the pace. I enjoyed his read most of the time, it was just the villains I had a problem with. It would have been more of a surprise twist if the voices had been different. It was too obvious for my liking.

Overall this is a fascinating series and has great potential for tween boys and girls. Most of it comes from Bronson's POV but the parts with Cindy really mix in well. I cannot wait to see what happens next for these kids. There are loose ends still out there, but I am sure they will be tied in the next book.

Disclosure - I received a copy of this book in exchange for an honest review. All thoughts, ratings and opinions are my own.