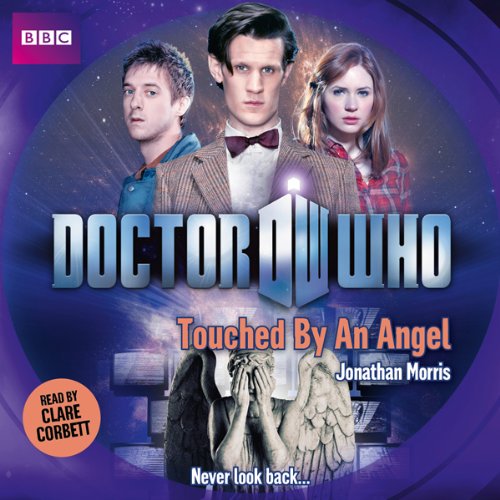 Doctor Who: Touched by an Angel

By: Jonathan Morris
Narrated by: Clare Corbett
Try for $0.00

The past is like a foreign country: nice to visit, but you really wouldn’t want to live there. In 2003, Rebecca Whitaker died in a road accident. Her husband, Mark, is still grieving. He receives a battered envelope, posted eight years ago, containing a set of instructions with a simple message: "You can save her."

As Mark is given the chance to save Rebecca, it’s up to the Doctor, Amy, and Rory to save the whole world. Because this time the Weeping Angels are using history itself as a weapon.

Read by Clare Corbett, Touched by an Angel features the Doctor, Amy, and Rory, as played by Matt Smith, Karen Gillan, and Arthur Darvill in the spectacular hit series from BBC Television.

What listeners say about Doctor Who: Touched by an Angel

One Of The Best Doctor Who Books I have Heard/Read

Where does Doctor Who: Touched by an Angel rank among all the audiobooks you’ve listened to so far?

This is the best to date. Usually a book based on a TV show is a watered down story that doesn't affect the shows continuum and steers clear of the big villains. This would have made an excellent episode of the series. It personally had an impact on me because I listened to this book, around the time of the Weeping Angels offed Rory and Amy from the show.

When the Ponds are around, Rory gives the doctor a run for his money

Have you listened to any of Clare Corbett’s other performances before? How does this one compare?

If I may quote the Doctor, She was brilliant. This was my first Clare Corbett performance, but not my last. Many because I have two more Doctor Who audios with her as the narrator.

Not enough Doctor and the Ponds

The story was okay, but it focused too much on this third character that I really didn't care about. Touched by an Angel is mostly about how he gets sent back in time and lives his life in tandem with his younger self. The Doctor and Amy and Rory show up now and then to keep him on track and prevent him from doing anything he shouldn't that would create a paradox the Weeping Angels can feed off of. That's it, that's the whole book.

As much as the story wasn't what I was expecting, I did have to find out what happened, it just took a very long time for me to get into it. I still didn't really care what happened to the main character (I can't even remember his name, that's how much I didn't care), but I did want to know how everything was resolved. I felt the ending undermined a little bit of Amy and Rory's story arc ending in Angels Take Manhattan, but I find that is pretty common with the Weeping Angels. When they first show up in Doctor Who, they aren't too threatening of a villain, but seem to gain powers and influence throughout the series. Their level of scary is mostly determined by whomever is writing the book/episode. In Touched by an Angel, it's fairly mild.

And Claire Corbett is still not my favorite narrator.

If you are fan of the show, get this book.

Let me say up front, if you are an audiobook listener and a Dr. Who fan, you need to hear this book, and I assume most of you who are already have. No need to read this review further, if you do not already have it, just get it and enjoy. The Audiobook is titled “Doctor Who: Touched by an Angel: Eleventh Doctor, Book 10”. You may be asking, is it worth a hard-earned Audible credit for just over five hours of entertainment? Yes, yes it is. Jonathan Morris tells a fantastic tale of time travel, The Doctor (Matt Smith) along with his two companions (Amy and Rory). Not only are these some of my personal favorites in doctor and companions, the book also includes one of the more formidable Doctor’s enemies; the weeping angels. Again, if you are Dr. Who lover, why are you still here reading this review? Go get the book!

The book throws us into one of the Doctor’s timey-wimey time paradoxes where a husband is sent back in time because he was touched by one of the angels, and in doing so he intends to save his wife by preventing the car accident that takes her life many years in the future. As he comes to grips with this new time placement, he comes up with plans on how to best notify his future wife of her impending doom. He also needs to make some money to live and start his life over in the past. We often see Time getting in the way trying to prevent the event that Mark so dearly wants to stop. Things are mostly going well until Mark (her husband) runs into is younger self and the Doctor and companions need to get involved. Not only is the book fully of Dr. Who goodness, but there is also a solid love story with a rollercoaster ride of emotions along the way.

The book does an exceptional job of bringing a Doctor Who episode in more than just a TV format, and the audiobook is excellently narrated by Clare Corbett; who has been involved in some of the best rated audiobooks on Audible. I very much enjoyed her voice and ability to bring the words to life. I had no issues with the audio or quality, and the narration was done skillfully. I know I will be looking to listen to more by this narrator in the future.

For those who have seen many of the newer episodes of Dr. Who played by Matt Smith, the author blends his personality as one would expect from the TV show. We see some humor, lightheartedness, but also a serious side to the doctor when it is needed. His mannerisms and sayings all come out in this wonderfully produced book. I also liked that Amy’s and Rory’s characters were also well portrayed in the book. It was like listening to an extended TV series.

If you are not a fan of Dr. Who, you may be confused by some of the events that take place in the book. The author writes as if you already know much of the backstory of both the Doctor and his antics. I would suggest for those who have not seen a Dr. Who episode, go and watch a few with Matt Smith and you will more easily understand and enjoy this book. I will say that this is the first Dr. Who audio book I have listened too, but I will be picking up a few more as I enjoyed it very much.

One of the best novels I've read in a long time. You will not regret buying it!

Time travel at it's finest.

One of the best Doctor Who books I've read so far, full of paradoxes and ramifications ( nice word, ramifications...), not to mention the blinovitch limitation effect. Great emotional story too. If you had a chance to go back in time to change things, would you do It? But what could happen? If you're a fan of Doctor Who or like time travel stories, this book is for you.

If you could sum up Doctor Who: Touched by an Angel in three words, what would they be?

What was one of the most memorable moments of Doctor Who: Touched by an Angel?

Have you listened to any of Clare Corbett’s other performances before? How does this one compare?

This is my first one and it was fantastic

I buy these audio books for myself and my kids. I have to say that I don't know if my kids will enjoy this story as much, but I loved it. The angels are back, but in a new way. I really wanted to find out what would happen next, and "couldn't put it down". Clare Corbett does a really good job narrating. I will be listening to this one again.

Story was an excellent reminder of the importance to show love while we have time.

Good Doctor Who story. I could totally see this being made into an episode. Loved the time travel. Who wouldn't want to go back to see their loved ones?

The Angels... You gotta love them!

I purchased this book with great trepidation. How could "The Doctor" work as a novel? But it did. Of course,its best to know the characters in seeing them on TV.

She is absolutely spot on with the characters - each had a voice AND a separate accent.

An excellent vehicle for the usually misused weeping angels that shows just how effective they can be when used to their fullest.

The dr, Amy and Rory characterisation is spot on (especially Rory) but they take second place to a well portrayed romance of epic sweep.

Really one to recommend for any fan.

Really good story with a good performance by Claire Corbett - though I wasn’t too taken by Amy’s accent nor the Doctors voice.

Mark isn’t doing well. His beautiful wife, Rebecca, died in an accident years ago and he can’t seem to move on. He receives a letter one night at the office that will change his life.
The angels need to feed. They send Mark back in time but luckily he has the letter still in his pocket, a guide for him through the coming years.
With the Doctors help can he navigate the past to secure his future happiness? Or will he destroy the world with a time paradox?