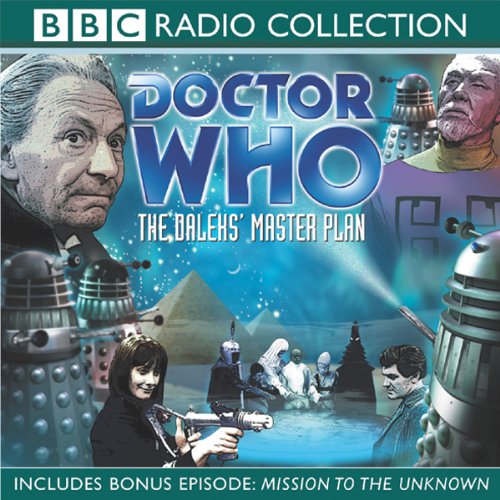 Doctor Who: The Daleks' Master Plan

William Hartnell is the original Doctor in the most epic Doctor Who story ever made, in which his arch-enemies, the Daleks, threaten to destroy the fabric of Time itself!

In their quest to gain control of the Solar System, the Daleks have taken posession of the Time Destructor, a weapon which threatens the safety of all who stand in their way. As they head up an alliance of alien races bent on destroying the human race, in their midst is none other than the treacherous Guardian of the Solar System, Mavic Chen.

A dangerous chase ensues across volcanos, jungles, deserts, and futuristic cities, as the Doctor and his companions struggle to prevent the Daleks' plans coming to fruition. The stakes are high, and for the first time in the programme's history the lives of two TARDIS travellers are lost....

Peter Purves (who played Steven in the story) narrates these thirteen episodes, only two of which survive in the television archives. Included is the special 'teaser', Mission To The Unknown, which was transmitted some weeks before the master plan itself was unleashed.

What listeners say about Doctor Who: The Daleks' Master Plan

Magnum Opus of the Daleks

This is the audio soundtrack from the 1965 Doctor Who serial: "The Daleks' Masterplan" - starring William Hartnell in the title role--the original actor to play the part. This is one of many early stories that no longer exist (as video) in their entirety in the BBC archives, as they were among those deleted when the BBC was purging its video archives in the early 70's.

Dalekmania was in full swing at this point, and this twelve part story from the third season is simply space opera done Dalek style. The Daleks aren't just talking about universal domination here, they're doing something about it. The story opens with Doctor stumbling across a base of operations on the planet Kemball, from which the Daleks intend to launch a final conquest of everything in collusion with a number of power-hungry galactic leaders, including the traitorous Mavic Chen, guardian of our Solar System!

Action shifts from Kemball to numerous otherworldly and earth-based locales throughout time which lends an expansive feel to the story. Like many early Dalek stories, the Daleks are well characterized here and at their scheming best. The supporting cast is wonderful, and includes an extremely moving act of self-sacrifice by companion Katarina, as well as the welcome return of fellow time lord, The Meddling Monk.

There is some hammy dialogue in a few of the episodes as writer Terry Nation doesn't seem to understand the difference between "solar system", "galaxy" and "universe"; however, if you can overlook this The Daleks' Masterplan can be a real treat alternating between drama, humour and an engaging chase across time and space.

Note: episode 7 was aired on Christmas and is a bit of a self-aware slapstick run-around, ending with Hartnell turning to the camera wishing the audience a good holiday (which is much maligned by fans, however given Hartnell's love of the program is somewhat fitting). It is nice to see it included here.

Fans of the era won't be disappointed.

This is the audio track from a 1963 BBC TV (with the first Doctor, William Hartnell) program with naration to fill in the blanks. It's sort of like an old radio show. Dated perhaps, but hey, it's Dr. Who - - battling the Daleks no less. This is a 13 part story, which was the longest of any Dr. Who story. Since it's so long, the plot wanders. Dr. Who finds himself on the planet Mira, then later on a valcano planet, then on a silent movie set, then back in ancient Egypt, and so forth. At 5 hours long, it would be good for a plane trip. Campy enough not to be too stodgey, but serious enough not to be silly.

Two stories in one

This is when the OG Doctor Who upped the stakes and began to look like the Who we know today.

The added narration’s writing quality and delivery inject energy into a story that otherwise would be hard pressed to keep the modern listener’s interest, although the episodes are full of classic 60s peril and melodrama. The companions in this episode are particularly forgettable, and neither Steven, Katarina or Sara are written with much character or distinguishing qualities– as with all classic Who, patience is required. Be prepared for a long, long Dalek story spanning different planets and eras, something I personally enjoyed. Surprise Familiar Voice: Nicholas Courtney (the Brigadier) as Brett. Also, be prepared for WAY too much Mmmmavik... Chen.

Still a great story. I can listen to this adventure over and over again and never get tired.

The last episode is the best! Intense and spellbinding! But the cost of victory is high! I recommend this highly!

I consider myself a huge Dr. Who fan, but this is too much. It's not a question of audio production, the audio's fine, it's the plot which is completely lame. Slow, uninteresting, and then downright braindead when the plot finally "thickens," the storyline revolves around a very predicatble powerplay between two cardboard figures. Ardent Dr. Who fans will avoid this one like the bird flu.

The most epic Doctor Who storyline every produced but sadly lost. Thankfully, here we have cast member Peter Purves providing an unintrusive commentary on an excellent quality recording of the lost shows' soundtrack.

An epic 13 episodes long, it manages to thrill, amuse and delight throughout with twists, turns and even a comic Christmas episode part way through. If you're a true fan, you need to hear this.

Master of All Daleks Plan

Being too young to of seen this televised gem (1 week old) i have always wondered what it played out like back then, so i got the book and devoured every printed word. Now available to me in all its audio glory from Audible i sat and listened to this epic adventure..

What a masterpiece of vintage Dr Who even including the Doctor-lite episode 'Misson to the Unknown' aired on my date of birth which sets up the grand plan of the daleks in their quest for universal domination. Bare in mind the tale is 12 episodes long at 25 minutes a piece so i would advise short chunks then comeback to it when time is available to you.

Overall a thrilling adventure that grips you till the devastating outcome and loss of companions are felt. This is Dr who at its famous best. 10/10

it was the best hartnell audio I have listened to. buy it now. hdhdhd hddhhdd

The problems with this story are mainly twofold for me firstly I think it’s 3 or 4 episodes too long (12 episodes) and secondly the rather pointless comedy elements just not necessary.

excellent way to hear a long lost dr who story. this story is an essential part of dr who audio soundtracks.

Loved this Dalek story, especially as it is one of the lost ones and is an excellent way to experience classic Doctor Who. The narration was brilliant and well performed. However, regarding the story line itself, episode 7 was bizarre and not in keeping with the general premise of the narrative.

The best way to listen but with a minor problem

So you're thinking of downloading Dr Who: The Dalek's Master Plan. First, ask yourself this very important question:
Are you a Dr Who maniac who loves all things DW no matter how naff and is fascinated by the 60's stories that are only availible as sound tracks due to the infamous BBC archiving policies?

If the answer is 'no' please walk away right now.

There is a lot wrong with this product and not much right with it.
Let's start with the good things:
You get a lot for your money
It's interesting to hear the 'lost' TV stories
er.... it's got daleks in it.
Now for the not so good:
The story provides a new definition of incoherency. It's very very long. It goes on mayor detours (the best of which being the Christmas episode, also one of the worst episodes of all time according to fan sites).
The naration lacks any kind of enthusiasm or pathos, sounding instead like a retired Blue Peter presenter sat in a small room.
It's reallly quite boring, quite often.

This one is for Dr Who completeists only I'm affraid!