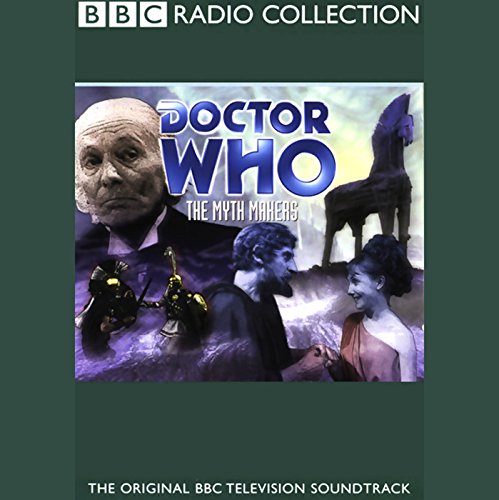 First Doctor William Hartnell and his companions mix with mythical Greek Gods in this exclusive audio recording of a 'lost' television soundtrack, with linking narration by Peter Purves.

The Doctor has adopted many guises in his time, but to be hailed as the great god Zeus is a bit of a shock. Yet this is exactly what happens when the TARDIS lands on the plains of Asia Minor, not far from the city of Troy. Taken to the Greek camp by Achilles, the Doctor is introduced to Agamemnon and Odysseus and forced to admit his less¿than¿godlike status. He is then given just two days to come up with a strategy for defeating the Trojans.

Meanwhile, Steven and Vicki have been taken prisoner by the other side. The Trojans are convinced that Vicki is a spy, and to prove her loyalty she must concoct a plan to defeat the Greeks! Like the Doctor, she has just two days to do it.

Luckily for the Doctor, a certain someone has already devised a scheme for beating the Trojans. Even if the wooden horse was invented for a piece of fiction written in the eighth century, it still works. As the opposing forces come face to face in a climactic battle, there are dangers aplenty for both Steven and Vicki. By the time the TARDIS moves away again, it will have both lost and gained a crew member.

Yes I would. Anyone who likes myths and fantasy sports.

What other book might you compare Doctor Who to and why?

Yes I have. Peter Purvas is a great narator.

This was a great story full of enough humor and drama and action to make anybody enjoy this book.

A cheeky yet intelligent look at legend

With the Doctor more associated with other worlds, future societies and daleks, the historial stories are often sadly overlooked.

This one is an absolute gem. Paying reverent tribute to the Greeky myths, this one has a lot to recommend: humour, drama and emotion. You don't need to know your Illiad or your Shakespeare but if you do, you'll delight in the way the writers have fleshed out the characters and story, making this a more historical interpretation of legend.

Best of all, this audio version flows nicely in the mind, with the narration covering everything nicely without affecting the pace or leaving the listener confused.

Also, given the change to the Tardis' line-up, this is an essential story for all Doctor Who fans. And as nothing but a few paltry clips survive, it's this or the novelisation.

Another great Doctor Who story, which is highly recommended for a listen. I really love listening to these Audiobooks of lost stories.