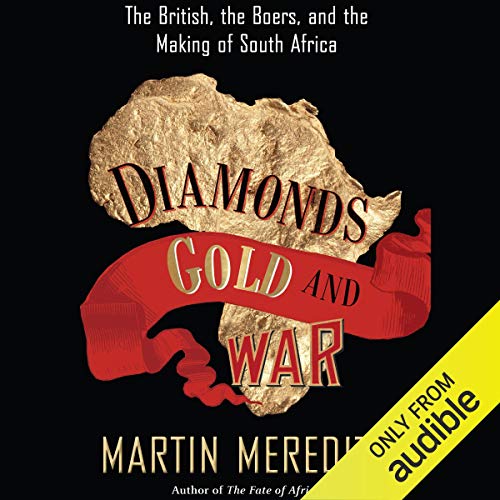 By: Martin Meredith
Narrated by: Matthew Waterson
Try for $0.00

Southern Africa was once regarded as a worthless jumble of British colonies, Boer republics, and African chiefdoms, a troublesome region of little interest to the outside world. But then prospectors chanced upon the world’s richest deposits of diamonds and gold, setting off a titanic struggle between the British and the Boers for control of the land. The result was the costliest, bloodiest, and most humiliating war that Britain had waged in nearly a century, and the devastation of the Boer republics.

The New Yorker calls this magisterial account of those years “[an] astute history.…Meredith expertly shows how the exigencies of the diamond (and then gold) rush laid the foundation for apartheid.”

What listeners say about Diamonds, Gold, and War

Years ago I devoured Meredith's The Fate of Africa and was duly impressed with his ability to capture monumental volumes of information in one gripping narrative. Page turner. So I knew going into Diamonds, Gold, and War that I was in for a treat. The story did not disappoint. In this volume Meredith doesn't take a demographics and statistics approach to historiography, but rather a character-driven approach. He brings to life the persons of Kruger, Smuts, Milner, Jameson, and above all, Cecil Rhodes... among many others. It is their ambitions, fears, manipulations, and quirks that Meredith weaves into a storied tapestry until, almost surprisingly, the listener finds that the finished masterpiece in view is the modern nation of South Africa in all its tragedy and glory. Superbly crafted, and truly enjoyable.

The narration, on the other hand, leaves much to be desired. I never imagined myself a narration snob. In all the other books I've listened to, I've not had a complaint about the narration. But this one caught me off guard. First was the pace, agonizingly slow. For the first time ever I used Audible's speed-up capabilities and was grateful for the return to normal listening. But the more major frustration - one which technology couldn't turn off - was the narrator's utter lack of familiarity with South African terminology. I grew up in South Africa for several years, long enough to learn to shudder when foreigners mispronounced common words like kopje, veld, and even boer. I shuddered over and over and over listening to Waterson's narration. Proper nouns such as Potchefstroom, Magaliesberg, Witwatersrand, Gaborone, and Bambatha left him completely lost. I understand that these are foreign words to an American Brit like Waterson, but surely Audible could have chosen a narrator familiar with the region of the world on topic. Or Waterson could have done his homework. Youtube is amazingly easy to use - listen to South Africans saying South African words. If Meredith spent years doing his homework, surely Waterson could have spent a few minutes doing his homework.

To be fair, Waterson's pronunciation got a little bit better as the book went along. I was expecting the worst when he got to the closing chapters about Botha, but he did pretty well.

But then to top that off, there were even a few English words that made him stumble. He pronounced "hegemony" at least two different ways, I think it might have even been three.

So in a nutshell, still well worth the listen as Meredith presents a gripping narrative history, but don't even think about imitating Waterson's pronunciation if you ever choose to converse about southern Africa and want to sound like you know what you're talking about.

Engrossing story on the evolution of the modern SA

I read this book when it was first published in the US some years ago and was enthralled. Very familiar with the territory as I am, I have recently been severely disenchanted by the abundance of post-1994 revisionist pablum that now occupy the bookshelves of most bookstores and many libraries. One recent, well-acclaimed review of the new South Africa barely mentions pre-1994 history!
This audible book gave me a chance to re-explore the hows and the whys of the Republic's evolution. I enjoyed it thoroughly and was fascinated to, once again, re-discover how much the story parallels our own US history during a similar period (without King and Country, of course). At least those much maligned "white Africans", the Afrikaners, get a fair hearing here and one also begins to realize that their British Imperial overseers were as much responsible for sowing the seeds of apartheid as their Boer wards. Affirmative action, early twentieth century style.
The narration is, on the whole, very good indeed BUT is marred by the reader's absolutely atrocious and fractured pronunciation of Afrikaner place-names etc. Something that, with a little advanced vocal coaching could easily have been rectified, btw. Otherwise Highly recommended!

audible needs to get a South African to narrate this book. The pronunciation of placed names and names of people is inaudible.

I would recommend this in a heart beat...

What other book might you compare Diamonds, Gold, and War to and why?

None like it other that specific history of various events in Southern Africa... this is a great overall story encompassing the entire history...

What does Matthew Waterson bring to the story that you wouldn’t experience if you just read the book?

passion and excellence in delivery of the story...

the never dying spirit of the Voortrekker and the Boer...

I saved you 19 hours with the headline above! If you have the time there are a couple tidbits of info.

enjoyed this very much... scope was great. fascinating cat of historical figures... really enjoyed it

Great overview of colonial South Africa. T
his book has motivated me to learn more about the region.

Great history lesson, although rather too sympathetic to the the colonizers. But - - Why oh why did nobody think to hire a South African voice actor for this? Only the English names are close to recognizable. Narrator mispronounces Boer every time, doesn't even attempt the click in Xhosa or any other African word, and mangles other names beyond recognition. The only South African word he consistently gets right (in historical quotes) is 'k-----' which is the one word a random white-sounding dude should NOT be reading aloud without at least an audio footnote explaining how offensive and painful it is and why it's in there anyway. But THAT is the one word pronounced correctly? Really?

Audible seems to have consistent disdain across the platform for hiring narrators who can correctly handle names and dialects from the Global South, and it gets really tiresome and offensive. But this guy, well matched as his style is for non-fiction, does not even TRY to get things right. I am sure the director and producer are also to blame here, but really. As another reviewer noted, recorded examples of correct pronunciation are readily available online. As are lessons in correctly pronouncing click phonemes (i.e. Xhosa) and Afrikaans double vowels and rolled Rs (Boer).

A Diamond Of A Book

The story of south Africa told through its diamond trade. I found it very interesting and it is a subject not often covered.