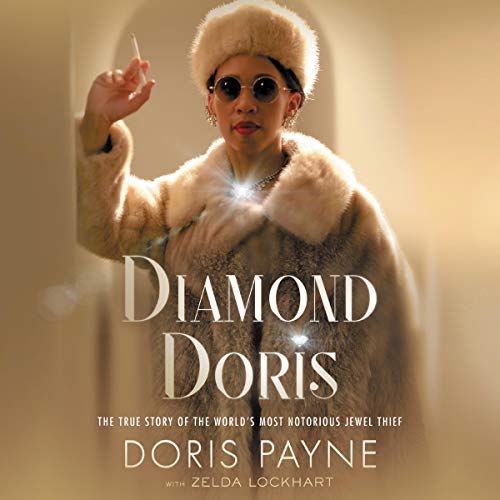 In the ebullient spirit of Ocean’s 8, The Heist, and Thelma & Louise, a sensational and entertaining memoir of the world’s most notorious jewel thief - a woman who defied society’s prejudices and norms to carve her own path, stealing from elite jewelers to live her dreams.

Growing up during the Depression in the segregated coal town of Slab Fork, West Virginia, Doris Payne was told her dreams were unattainable for poor Black girls like her. Surrounded by people who sought to limit her potential, Doris vowed to turn the tables after the owner of a jewelry store threw her out when a White customer arrived. Neither racism nor poverty would hold her back; she would get what she wanted and help her mother escape an abusive relationship.

Using her southern charm, quick wit, and fascination with magic as her tools, Payne began shoplifting small pieces of jewelry from local stores. Over the course of six decades, her talents grew with each heist. Becoming an expert world-class jewel thief, she daringly pulled off numerous diamond robberies and her Jewish boyfriend fenced the stolen gems to Hollywood celebrities.

Doris’ criminal exploits went unsolved well into the 1970s - partly because the stores did not want to admit that they were duped by a Black woman. Eventually realizing Doris was using him, her boyfriend turned her in. She was arrested after stealing a diamond ring in Monte Carlo that was valued at more than half a million dollars. But even prison couldn’t contain this larger-than-life personality, who cleverly used nuns as well as various ruses to help her break out. With her arrest in 2013 in San Diego, Doris’ fame skyrocketed when media coverage of her astonishing escapades exploded.

Today, at 87, Doris, as bold and vibrant as ever, lives in Atlanta, and is celebrated for her glamorous legacy. She sums up her adventurous career best: “It beat being a teacher or a maid.” A rip-roaringly fun and exciting story as captivating and audacious as Catch Me if You Can and Can You Ever Forgive Me? - Diamond Doris is the portrait of a captivating anti-hero who refused to be defined by the prejudices and mores of a hypocritical society.

Featured Article: Finished Netflix’s 'Tiger King?' Here’s What to Listen to Next


Netflix’s wild documentary about a feuding group of big cat zoo owners arrived just in time to distract us from our quarantine blues. So after we finished the series and exhausted every meme, we did what we always do in times of crisis: We polled the Audible editors for listening recommendations. True to our persnickety tastes, some editors suggested stranger-than-fiction true crime with predatory twists; others, subjects the show left to viewers to decode.

What listeners say about Diamond Doris

I thoroughly enjoyed listening to stories about Doris' exploits. The audiobook was entertaining and I listened to it in one day. The only problem is that I was so intrigued, I researched her a bit more after the book. It became obvious that her story has been glamorized to the extent that I question it's true value . I won't give away some of the truths about her life that I learned because I was able to enjoy this entertaining rendering of her story. However, there are other stories and cautionary tales that could be just as enjoyable about Doris Payne's life.

Very interesting story - fabulous storytelling. Don't judge too harshly. A child can not escape from a coal mining town in West Virginia without falling into some kind of magical abilities. Shapeshifting, charming and hypnotism skills, vanishing into thin air, flowing anywhere like water, Houdini-like escape skills, superb acting skills, political savvy tricks, creating reality and ruthlessness. Full regard for self and no regard for others. The hills of West Virginia were not big enough to swallow her up. That in itself is a worthy story.

This is a quick and easy read. The author gives you the overall story of an international thief you may have never heard of until now. The storyline is intriguing but feels a little superficial as it skips from one "job" to the next with only small details on her daily life. This book is unnecessarily repetitive at times. Overall, worth a read if your curious.

A great story of adventure and human spirit.

While no one can say that what she did was right, I admire that she never let race stand in her way. She didn't accept the ceiling above her and rose to the height of her "career".

it was an interesting story, especially because its supposed to be a true story. I was surprised by the. fact that she was a black woman getting away with. this; and, in that time period. I don't care what kind of outfit she was wearing.

I loved how she recounted all of her heists and how classy she was! Doris Payne you were a ‘Smooth Criminal’!!!

The beginning of the story was unbelievably slow - at one point I actually rolled my eyes at the painstakingly detailed description of Doris getting ready to visit a jewelry store. I finished the book only for the principle of it, but I was extremely tempted to just drop it. While the story does get better about halfway through, there are still passages that seem frivolous and are downright annoying - why would it be so interesting to know that Doris was wearing Louis Vuitton sandals when she was an 80 year old? There also comes a point where even her swearing becomes irritating. I swear like crazy, and it has never bothered me to hear others do so. But having a 60-some woman telling you that she just laughed her f*cking as* off seems as if she is forcing herself to use swear words where they aren't really needed. I bought the book because the blurb was interesting and it had pretty good reviews, but both were hyped up. There are definitely better books out there to lose yourself in.

As I am listening to this biography, I was skeptical about the veracity Doris Payne's tales. And that is just what they were "tales" of the tall kind. She says so in the afterward.
For someone who deeply desires to be a class act, she had no compunction about "taking" other people's property but complained vociferously when it happened to her. Save your "earned" money - I'm glad I got this one on sale.

story was so entertaining and narrator was perfect! didn't want it to end. made me want to learn more about Ms. Doris Payne!

Never heard of this woman before, but it was a delight to read. I thoroughly enjoyed it.