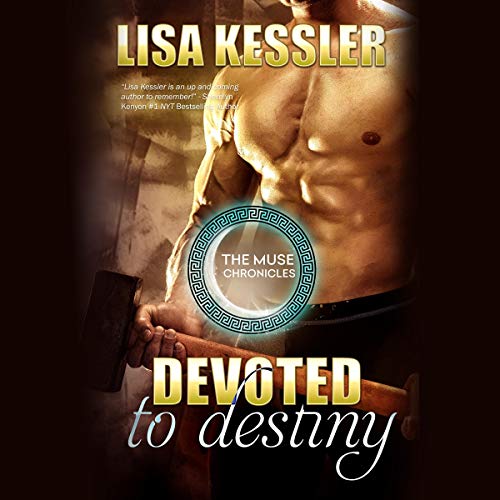 By: Lisa Kessler
Narrated by: Gwendolyn E. Druyor
Try for $0.00

His curse could save her life....

Mason Knowles is a carpenter with a secret. He's a Lycan, cursed by Zeus to shift into a wolf. With each transformation, the curse becomes stronger, threatening the man to succumb to the animal forever.

Clio Clarke is the human vessel for the muse of history, devoting her life to studying the past. But when destiny brings Mason into her present, Clio realizes she still has plenty to learn about love and trust.

Mason discovers he's Clio's guardian, gifted with inhuman strength, however, it will take more than might to stop an immortal from hurting her. He'll sacrifice anything, even his own humanity, to keep her safe, but this shift could be his last.

The prophecy: "Every generation, the nine daughters of Zeus are reborn, and with their rebirth are also nine guardians. They will be marked by the gods, and given gifts to protect his treasure. Their abilities will only be unlocked when they find their muse."

What listeners say about Devoted to Destiny

Clio is so shy, Mason is not shy but a man of few words. He knows about the muses and the gods because he is a lycan. He is not sure if Clio knows what she is so is hesitant to say anything. The action starts early and keeps going throughout the story. More pieces of the puzzle start to fall into place and they find an enemy in Pamela who is a goddess who walks the earth as a mortal. The narrator did an awesome job brining the story to life I really enjoyed the whole performance.

Clio and Mason are amazing together. I really love Mason, by far my favorite! With his southern charm and courtesies, what's not to love?? I will say there were two particular character reveals that I totally saw coming, however there were 3 that COMPLETELY blind sided me, so now I'm really anxious for what's to come!!

Narrator does a nice job. Her male voice could be a little better, but overall, she gave a quality performance.

Love this series! Love the whole premise about the Greek muses, and other Greek mythology. Love the suspense and action. Love the characters and love the direction the story is going in. I'm beyond super excited to read the next books! I'm already loving the direction that the next muses stories are going. I'd recommend reading the books in this series from the beginning because there is a continued storyline throughout the whole series. In this one, Clio the muse of history, has a major crush on sexy handyman, Mason. The muses each have a guardian that is supposed to protect them from the evil forces that are trying to kill them. Clio wants Mason, but she wants what her other muse sisters have with their guardians; love, so she keeps denying her feelings for Mason. Mason is more in the know than Clio thinks though, and these two can't resist the pull of chemistry between the two of them. I loved Clio and Mason's connection! They are adorable together! Their story is really sweet! I also loved the direction Mason's story went in. These two have some dangerous situations to deal with, and it's wonderful to see the whole group working together. Really great series, and I'm really excited to read the next book! Love when there's a bit of the enemy to lovers thing going on! Excited!!!