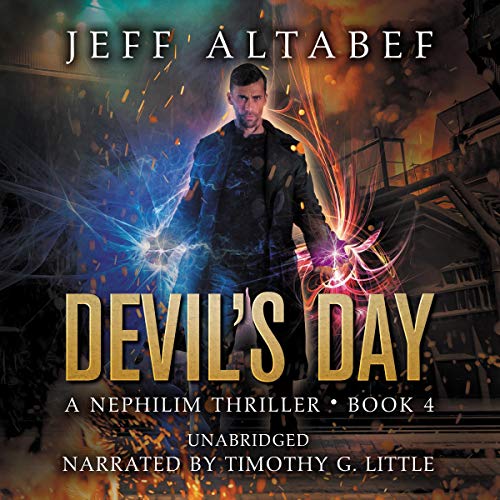 By: Jeff Altabef
Narrated by: Timothy G. Little
Try for $0.00

I’m running out of time to prevent the End of Days.

In an unfortunate twist of fate, I’m the bloody Anti-Christ, and everyone wants to take me down: light and dark angels, Magics, and a particularly annoying sheriff. It’s really pissing me off.

I’m outgunned in this fight, so I turn to the Fates, but their help won’t come cheap.

Someone is possessing holy people in New York City, turning them into terrorists. The Fates want him stopped, not because they’re swell witches, but because they think he’s hiding their Sight and out to get them. If I can somehow kill this ultra-powerful, voodoo-practicing madman, they’ve promised to help me.

But will it be enough?

My father tells me he has a plan that might just stop the end of the world - if I’m strong enough to complete it. I’d like to trust him, but...well, he is the Devil. Best devise a plan of my own, just in case.

If you like Jim Butcher, Steve McHugh, Michael Anderle, Nazri Noor, Shayne Silvers, Shannon Mayer, or K.F. Breene, you won't be able to put down the A Nephilim Thriller series.

EVOLVED PUBLISHING PRESENTS an intriguing, thrilling look inside a great battle between good and evil, possibly leading to the End of Days, with the fourth book in the multiple award-winning A Nephilim Thriller series.

"Fast-paced and action-packed, Devil’s Day is an absolutely brilliant novel that will keep you on the edge of your seat and wanting more. To say I loved this book is an understatement!" (Readers’ Favorite Book Reviews, Rabia Tanveer)

What listeners say about Devil's Day

I had to finish the entire series. So many twists and turns. It will make you think. It will remind you of the impact of true sacrifice.

Timothy Little does a great job narrating the story. Great voices and brings the characters to life.

Altabef creates and finishes his stories in less time than many books. However, the details and plot aren't missing anything. This was a fantastic series. Last, if you like spiritual warfare stories that will make you think about your eternity, this one will treat you. Just remember, this isn't the Bible and Altabef isn't God.