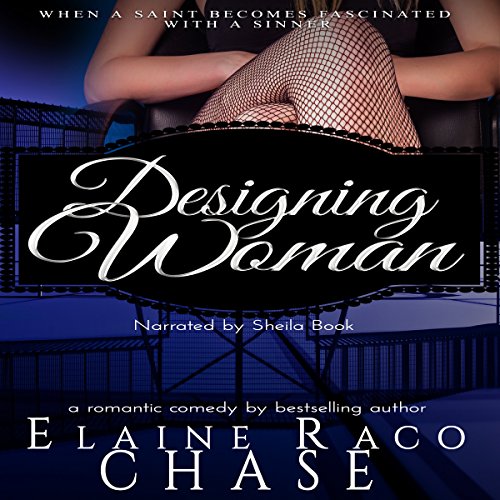 Brandy Abbott decided to teach Griffen St. Clair a lesson when he assumed to know so much about her and pronounced her the queen of seducers. Outraged, she chose to play it to the hilt, and found herself loving the part. What she didn't count on was the fact he was soon to be her boss and her lover - and a man who needed to be taught a lesson about women.

Soon she was thrown into emotional chaos and forced to choose between two of the sweetest things life offered: surrender and revenge!

What listeners say about Designing Woman

Brandy (B. J.) Abbott is an architect. Well, she was until she quit, being unable to take her boss’s schemes and chauvinism any longer. She helps her older half-brother out for a bit at his fancy restaurant (one she designed) while hunting around for a new job. She still has to complete her internship in order to get her architect license. Her brother gives her a lead: Mr. Griffen St. Clair is looking for an architect to design the condos he plans to put in on Daytona Beach. There will be fireworks between Brandy and St. Clair.

It was a quick read and it was cute. While I read a wide range of genres, I have to admit I have yet to fall in love with the contemporary romance genre. With that said, this book held my interest long enough to finish it mostly because of the humor. It’s a sweet romance full of misunderstandings and two people toying with fantasies.

From various things speckled throughout the story, I think this novel is set in the 1980s or so. Smoking is prevalent, including in restaurants. Brandy goes on and on about the male dominated architect world. There’s no cell phones.

For the first half of the book, the reader doesn’t have confirmation that Griffen, a random guy who overheard Brandy arguing with her boss, is the same Mr. St. Clair who praises her (B. J. Abbott) over the phone on her portfolio. But since it is in the book’s blurb, and it is also pretty obvious in the plot, I feel OK mentioning it here.

Now Mr. St. Clair has a really low voice over the phone that B. J. Abbott (the only name St. Clair knows her by) finds very sexy. But when they bump into each other in a restaurant (Brandy is playing hostess and Griffen is getting a drink), they don’t recognize each other at all. Now since their professional relationship has been solely by phone at this point, I was OK with it. But as they keep interacting in person and they don’t put it together, I found that a little bit of a stretch. Since it lead to comedic relief later, I can live with it.

The book has a lot of teasing and flirting. Eventually we get to some steamier scenes, which I liked. The characters eventually have sex at the end of the book, which is a rather brief scene and not particularly descriptive. So if you are looking for a sweet pretty clean romance featuring a career-oriented woman and a man bent on reforming her wanton ways, this is a pretty good read. My personal tastes are for spicy rather than sweet, but don’t let that deter you if this book sounds like fun. It was well written, the pacing was good, with a nice mix of reality, flirtation, comedy, and (eventually) steam.

The Narration: Sheila Book was a good pick for Brandy’s voice. She had a lovely sultry voice for the character, that could also be crisp and professional as the story demanded. Girffen St. Clair is suppose to have a deep, masculine voice and I felt that was a stretch for the narrator.

I enjoyed the characters in this novel. They were well developed and believable. What I liked least was the author's overuse of adverbs and adjectives; I found this distracting at times.

Would you recommend Designing Woman to your friends? Why or why not?

I would recommend it to my friends who enjoy light romances.

I thought the performance was good, although I would have liked it if she had changed her voice a bit more to differentiate between the different characters.

Overall, I thought this was a fun, enjoyable listen. A bit predictable, but the writing was good and the characters interesting.

Real Dialog that will delight!

Cleverly written dialog with a realistic story and characters

Narrator voice is soothing, and easy to understand with beautiful enunciation. Less excited about accents added - but voices were clear to distinguish.

Tons of fun - great book for commuting as long as you don't mind the looks and stares from the laughing. Realistic story line that is character driven and does not disappoint.

From the first time Griffen sees Brandy and overhears her conversation with her boss, he gets the wrong impression about her. This colors the way he thinks about her and he continues to misinterpret what he sees and hears. Instead of setting him straight, Brandy decides to play along. Things get awkward when she ends up working for him. Funny, with plenty of tension and lots of steam.

I was provided an audio copy for review and I enjoyed it. The narrator, Sheila Book, did a nice job. The story was easy to listen to and she differentiated between the characters nicely. She did muddle through the brief conversation that called for a British accent. Overall it was a steamy, enjoyable listen.

There was very little that could be done to improve this utter nonsense. The characters were shallow un unbelievable and just downright silly.

The narrator. Clearly she is a lover of commas as she inserted them whenever she could, when they clearly did not belong! Some of the sentence structure was totally destroyed by her pauses in the middle of a sentence.

A different narrator would be a good start but rewriting the whole book was necessary.