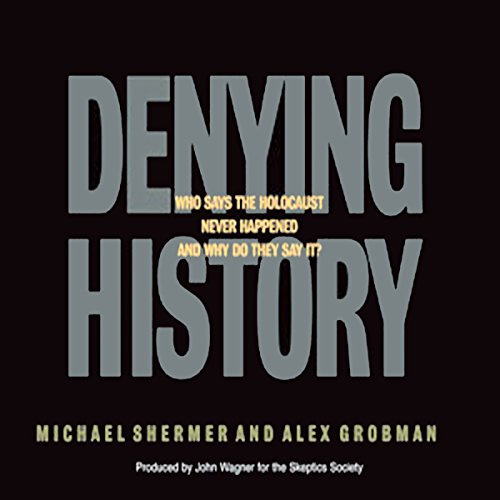 Denying History takes a bold and in-depth look at those who say the Holocaust never happened and explores the motivations behind such claims. While most commentators have dismissed the Holocaust deniers as antisemitic neo-Nazi thugs who do not deserve a response, historians Michael Shermer and Alex Grobman have immersed themselves in the minds and culture of these Holocaust "revisionists." In the process, they show how we can be certain that the Holocaust happened and, for that matter, how we can confirm any historical event.

Includes an extensive analysis of other pseudohistory claims, such as the denial of the "rape of Nanking", the claim that Aristotle stole philosophy from African philosophers, the belief that early civilizations were egalitarian and peaceful, the notion that the Phoenicians (or the lost tribe of Israel) discovered America, and many others.

"Convincing.... A patiently stunning case that denies the deniers." ( Los Angeles Times)
"Deserves a prominent place...especially for its survey of the flaws, fallacies and failings in the deniers' arguments." ( Financial Times)
"An inventively thorough treatment....Important....A powerful weapon for anyone who cares about learning from the credible historical record." ( Publishers Weekly)

What listeners say about Denying History

I have the actual book, and I was sad to find the audiobook is abridged. And it's not mentioned anywhere in the audiobook description

Shermer is a great communicator, his reasoning and explanations are easy to follow, and he makes a pervasive case. But given the age of the book and the other works I have read, and that this is abridged also does not help, mean there is little new or thought provoking. I feel most readers of this title will have the experience especially as it is so focused on the holocaust, so that any discussion of its denial likely will have given the same information, though Shermer's presentation is still excellent.

Please don't let this guy read his own work!!!

The book itself is excellent. But he is NO narrator. It would have been a much better listen with a professional narrator. He sounds like a highschool kid in forensics class.

At the risk of making it sound that I am mocking a serious matter, I believe certain things: Elvis is dead. The Earth is round. We did land on the moon. Oswald acted alone. There was a Holocaust.

Who in their right mind can deny the Holocaust? It’s just amazing to me that people continue to refute it so vehemently and maintain that was just an elaborate hoax. It’s stupefying.

I did not like the way the book presented the information, it was very “text-booky” and at times it felt like reading a bibliography. The beginning wasn’t even about the Holocaust at all, but rather about the theory of history – that part bored me.

Although I can’t say learned anything new, I’d still recommend it because it’s basically a fascinating topic.

This was exactly what I wanted: a compact and potent refutation of holocaust denial. Sadly, this should be required reading in schools, to inoculate against the anti-semitic poison disguised as “historical revision”.

What would have made Denying History better?

Would you ever listen to anything by Michael Brant Shermer again?

What didn’t you like about Michael Brant Shermer’s performance?

If you could play editor, what scene or scenes would you have cut from Denying History?

I would have changed the whole format.

This is more like sitting in a college class listening to a lecture. I just wanted to hear how people justified denying the Holocaust not all the other things. I'm sure there are better books just not on Audible.

Intelligent and well written. Easy to listen to. Presents interesting and educational material in a way that is clear and easy to follow

Informative without being dry

What about Michael Brant Shermer’s performance did you like?