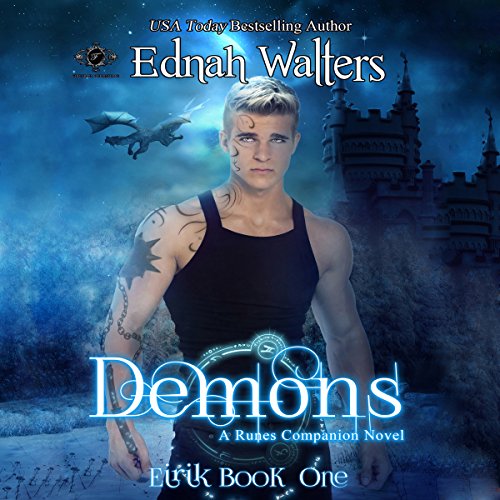 By: Ednah Walters
Narrated by: Gary Furlong,Kelsey Osborne
Try for $0.00

Eirik Baldurson - son of Baldur, God of Light - failed living as a Mortal. He lost the girl of his dreams and nearly got his friends killed. Now, he's gone to the underworld to meet the mother he's never known. Torn between his duty to her and the man he used to be, Eirik struggles to find himself, until a witch appears in his world. Feisty and stubborn, she is a reminder of everything good he left behind.

Celestia Devereaux proudly attends a charter high school for gifted teenagers who embrace magic. Witches. However, she keeps a terrible secret - a prediction that she would one day be responsible for massive destruction and death. Though Celestia uses her clairvoyant abilities to help people, she worries that it is just a matter of time before she goes over to the dark side.

Her world changes when she unexpectedly astral projects to a place she didn't believe existed and meets a tortured man who needs her help. Will helping him cause her fears to come true, or will he sacrifice everything to save her?

What listeners say about Demons

I couldn't wait till I got in the car to listen to it! I can't wait for the next one.

voices of the characters went with the book nicely. loved the story line as well.

I am in love with this series! It is amazing and once you start you just can't get enough

The Narration makes it better

What was one of the most memorable moments of Demons?

Mommy and her crew get worked....

Can't wait for these narrators to do the next 2 books

Ednah keeps writing them, I keep devouring them! oh how I love this world!!! Demons is just getting warmed up!

I hope they do the rest of Eirik's books
there was times a word would be louder then the rest of the story like they fixed it after, that would be my only complaint

An amazing story come to life

Ednah Walters did an amazing job with this story.

Follow Eirik as he finally goes home to meet his real parents and learns more about him self. Along the way you will be introduced to others that become important in his life and his new home. This story is magical and intriguing and full of wonder.

You wouldn't want to miss it.

The narration was great but I think that it could have been a little better if the guy had done all the male parts and the girl the female parts so that the voices were the same each time they were read. Still it was a fantastic job by the narrator's

This is a fantasy love story for the ages

If you could sum up Demons in three words, what would they be?

I love the way Celestia and Eirik find each other. They are both discovering new abilities and need each other not only for the support they eventually give each other but to find themselves and where they fit in this new world of theirs.

Which character – as performed by Gary Furlong and Kelsey Osborne – was your favorite?

I loved the whole thing. I enjoyed watching this impossible love story unfold. And I looked forward to seeing what would happen next in the story.

I originally read the book last year, but these narrators truly brought it to life.

This audience was awesome

I absolutely loved reading the book, and now adding the audio into the mix brings out a whole other layer to its awesomeness. The dual narration was amazing, both Gary and Kelesey out did themselves and transported me into the story to live it as they read it. Amazing audio can't say enough about it

Would you listen to Demons again? Why?

Absolutely!! It's a wonderful story and the narrators are easy to play stem to. They bring life to the characters. I can easily tell when the characters change with both narrators. I love how each bring out the accents needed for each character.

Celestia because of her spunk. She tends to put Eirik in his place when he gets a little full of himself. LOL

Which character – as performed by Gary Furlong and Kelsey Osborne – was your favorite?

This one is hard...I loved both Celestia and Eirik when the narrators performed. Gary did an amazing job with Eirik and Kelsey really brought out Celestia just how I imagined her.every scene

Every scene when Eirik and Celestia were alone. They were themselves and you could see them growing closer with each moment.