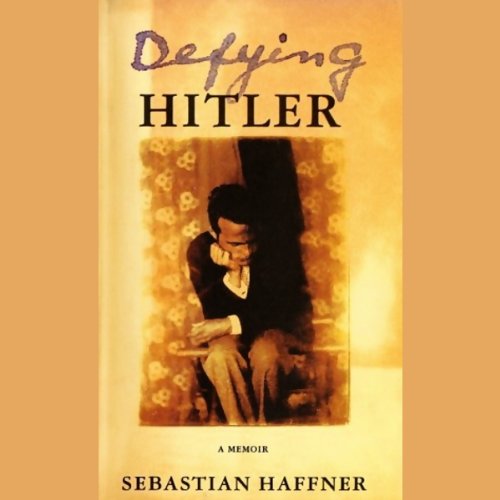 By: Sebastian Haffner
Narrated by: Robert Whitfield
Try for $0.00

When the famous German author Sebastian Haffner died at the age of 91 in 1999, a manuscript was discovered among his unpublished papers. The book was begun in 1939, but with the advent of World War II, Haffner had set it aside. His family made the decision to publish it, and the book became a best seller in Germany in 2002. Spanning the period from 1907 to 1933, it offers a unique perspective on how the average educated German grappled with the rise of Hitler, the growing influence of Nazism, and a rapidly changing society.

Haffner's astute and compelling eyewitness accounts provide a broad overview of a country in a constant state of flux. He examines the pervasive influence of groups such as the Free Corps and the Hitler Youth movement that swept the nation. His own family's financial struggles illustrate the disaster that befell many of Germany's citizens during the apocalyptic year of 1923 when inflation devastated the country. The later peaceful but dangerously uninspiring Stresemann years contributed still further to Hitler's rise to power. This is an invaluable chronicling of day-to-day changes in attitudes, beliefs, politics, and prejudices.

A major best seller in Germany now available for the first time in English, Defying Hitler is an illuminating portrait of a time, a place, and a people.

"his is a gem of a book, with as much intellectual force as, say, The Diary of Anne Frank has emotional force....Essential reading about that fearsome era." (Booklist)
"[A] masterpiece...A series of vignettes that vividly convey the texture of life under an emerging totalitarian regime." (The New York Times Book Review)
"A vivid examination of just how Hitler's ascension affected an ordinary German....This intimate self-portrait stands with Victor Klemperer's two-part memoir, I Will Bear Witness, as evidence that the personal can offer insight into the political tragedy of Nazism." (Publishers Weekly)

What listeners say about Defying Hitler

A story of moral courage

Being interested in the history of World War II, I found the title intriguing, but felt uneasy about starting this book. I expected horrors. I was surprised at how reassuring this book was. The persistence of one person's moral center of gravity during a society's terrible moral collapse is profoundly moving. The chapter on "comradeship" is a brilliant essay on the way even a self-aware person can temporarily lose himself in group loyalty. The description of atrocities is chillingly understated. Haffner shows an astonishing ability to connect social, political, psychological and ethical themes. The prose is musical. I came away with a better understanding of how the world, at least the Western world, has changed since fascism, and with greater confidence in the future.

Gripping and intelligent. What would my reaction have been were I a young man in Nazi Germany? I hope I would be even just a little like this man. I left this book feeling much deeper sense of the internal struggles with the myriad of external struggles. This is a captivating and must read both for its historical content but also, and most importantly, its ethical content.

This book puts a human, individual face on the rise of Nazism in Germany from the story of one good, young man growing up within it. In contrast to the many war stories displaying simply good and evil, this book helps us understand how Nazism could have risen to such power and horror, and how or why the populace didn't stop it. The writing is honest, poignant, and clear. The reader is excellent and the story is engrossing--not depressing, simply full of wisdom. Most alarming is how swiftly good Germans and their state fell to the desires of a violent minority, and one can't help finding relevant comparisons to the world today. I'm glad I read this book. It added to my understanding of the world and how things can quickly change in a way you never thought possible.

Undeniably, the best reader I have ever listened to- you actually feel as though he is the author. As for the book, I have always been fascinated by this period in history; wrongfully accusing the entire German population for the attrocities witnessed. Finally, a story that provides insight into the hellish Nazi peiod that divided a once proud people.

A brilliant and courageous view from the inside

A masterwork. Haffner's insight into his own responses to the insidious rise of the Nazis during his youth is powerful and moving. He courageously reveals his own vulnerability to a sense of helplessness and bafflement in the face of Hitler's unapologetic brutality and dehumanizing, lockstep ideology. Having grown up during the rise of the National Socialist party, Haffner experienced first hand the transformation of Germany as millions of Germans were morally and intellectually compromised. He walks us through this gradual but systematic metamorphosis, pointing out the crucial moments and illustrating their impact by revealing his own experience of them at the time. Nor does he spare himself from responsibility. The result is chilling and deeply instructive.

To me the most powerful sequence in the book is at the end when Haffner describes his weeks at an indoctrination program for prospective German lawyers under the Third Reich. While the young men are given uniforms and swastikas to wear, there is little or nothing in the way of overt political harangue or propaganda. Rather they are taught to shoot and march and, finally, to bond in a model entirely familiar to any member of an exclusive, all male group. Soon they are a brotherhood, a brotherhood with nothing in common except their brief, shared experience. They are also a well crafted weapon ready to be picked up and wielded by Hitler or any other leader with the charisma and craft required to aim them. Haffner follows this sequence with a condemnation of the quality of male comradeship which makes such things possible. His analysis is brilliant and compelling, especially to a reader with long experience in a variety of barracks and male dormitories.
Simon Vance is, as always, brilliantly clear and apparently effortless in his vocal rendering of the text.

This book put a real human look at the german people under the nazi rule. It helped to answer the questions of why--why didn't they stop this monster that took over their country. It gave a great look into the time before WWII in Germany and how that shaped the thought of the people. Very Interesting thoughts that will make you ponder for days.

Honest and thoughtful account of life in Germany leading up to World War II. The author provides a brief history of the main events that led to the Nazi takeover of government. Nevertheless, the majority of the book is his analysis of the mindset of the ordinary Germans in that trying time. The narrator is fantastic and the story is gripping. One of the best audiobooks I've listened to.

I am very interested in World War II history. This book gives an intimate glance at what an ordinary citizen in Germany might be feeling at the time of Hitler's rise. The suspense, at times, reads like the greatest fiction. But it is a true account. Highly rated.

This is one of the best audiobooks I've purchased. An excellent view of how Hitler's Germany came to be from the perspective of an ordinary, that is to say incredibly talented and perceptive but not highly placed, German. Highly recommended.

What an insight into life inside Germany of WW11 as it was happening! Haven't we all wondered 'What would I have done?'