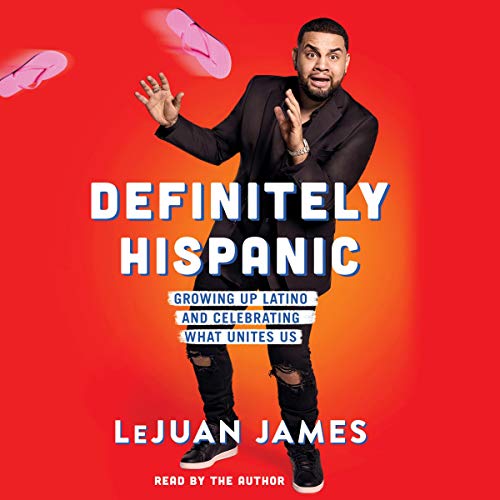 Behind The Scenes of Definitely Hispanic

Perfect for fans of Jane the Virgin’s celebration of Latinidad and Fresh Off the Boat’s situational humor, Definitely Hispanic is a collection of introspective and witty essays by social media influencer and viral phenomenon LeJuan James about growing up Hispanic in the US.

Social media influencer and viral phenomenon LeJuan James loves being Hispanic. But growing up in the United States to immigrant parents, he quickly noticed that their house rules and traditions didn’t always match up with his friends’. Years later, the result was a lifetime of laugh-out-loud, relatable moments that he reenacted on camera and shared with the world online. Now, LeJuan is taking a closer look at everything he loves about his family, culture, and community. Definitely Hispanic is a collection of heartfelt memoiristic essays that explores the themes LeJuan touches upon in his videos, and celebrates the values and traditions being kept alive by Hispanic parents raising US-born children. He shares anecdotes about discovering the differences between his and his friends’ households, demystifies “La Pela” (the Spanking), explains the vital role women play in Hispanic families, and pays reverence to universal cultural truths like “food is love” and “music is in Hispanics’ DNA”. From the chapter “#Home” - in which LeJuan talks about how his family moved back and forth between the United States and Puerto Rico until settling in Orlando, Florida - to “#TheHouse” - in which he was finally able to buy his parents the home they deserve thanks to his online success - this wide-ranging collection celebrates being Latino and offers a humorous yet warmhearted look at the lives of second-generation immigrants in the US. LeJuan’s hilarious online persona comes to life at every moment.

What listeners say about Definitely Hispanic

I laughed, I cried, and saw my own life reflected in this story...keep on bringing us your talent LeJuan...we need more of this in today’s world!!

Super Proud of You Juan :)

Like WoooooooW!! Super proud of you Lejuan. As a Dominican American person that I am I'm really truly Happy & Proud of you.

Awesome book that took me back to my childhood while confirming that all my nutty habits is in bedded in my blood. Hahha

I though I was the only one!

I usually didn’t get any of the traditional jokes as I couldn’t relate, then LeJuan James came along & I realize, I get it now as many of naturalize citizens because we can all relate to the hybrid of the cultures that we love.
Gracias LeJuan, for making comedy a integral part of my life.

Beautifully and wonderfully written, I just love this book. it made me laugh; made me cry and took me down memories lane. As a Hispanic I can relate to all of it; but I also feel so many of our American friends will understand us better if they read this book. Bravo!!!

Loved the honest, detailed and animated stories LeJuan James shares with his audience! As I listened,, his stories had me smile, laugh out loud and even tear up occassions.

Loved listening to LeJuan James take on growing up Hispanic. I have Mexican ancestry and everything he mentioned was on point! From superstitions to discipline. Will definitely pass this one on.

Juan, THANK YOU for shedding a light on our upbringing as Latinos. You hit true on every single point and anecdote you shared. I cried, laughed, and exaggeratedly nodded my head in agreement when you shared about your mom and how she raced you and your siblings. As a Hispanic mom myself, I’m all for every single one of those punishments and words of advice 100%, and like your mom, my boys are the universe to me and I’m glad to know that our ways race wonderful men like you in this world. I loved every minute of your book and recommend it all the way! Many blessings to you in your life and career.

Enjoyed it! Thanks for sharing

A+ - Thanks for sharing, can definitely relate, growing up latina and all you talked about.

Juan is so good at story telling!

I have the habit of starting books and not finishing them unless I find it extremely interesting... this book is one that I have been enjoying especially while going for a walk, or doing chores, putting me in a good mood listening to his hilarious stories (And the best part, he actually reads it himself! Which makes the content of the book even better). It’s relatable if you’re Hispanic, but even if you’re not, it’s entertaining to say the least.