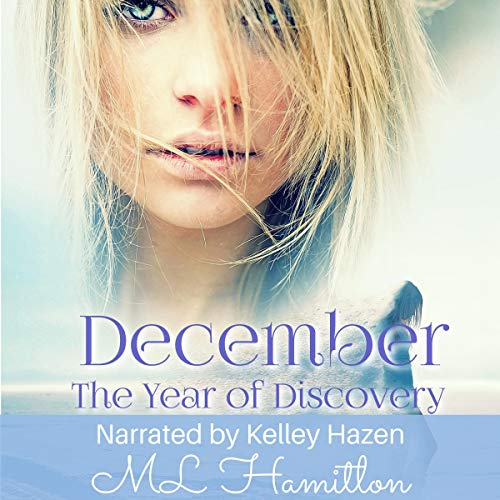 Twelve women connected by the death of another, realizing what they most want from life and reaching for it - this is the year of discovery, the year of new beginnings.

As the youngest of three sisters, Mika is thrown into turmoil by the death of her oldest sister, Meredith. She can’t admit that Meredith’s death has shaken her horribly, so she self-medicates with alcohol and finds herself in an abusive relationship.

When her ex-boyfriend makes bail, Mika fears what he’ll do to her and her family. As her life unravels, she turns to the only coping mechanism she has, but this only accelerates her descent. When Brendan Ward, a recovering alcoholic, offers to sponsor her, Mika responds with fury, but as things continue to come undone in her life, she wonders if she can learn to trust him before it’s too late.

What listeners say about December

I love these stories for each month. Everything that happens takes you on a journey. The Narrator helps to make this possible

A great closure to the series...

It's the last, closing book in the series and we finally get Mika's story...

Mika, the youngest of the three sisters, the one whom her family has always tried to shelter, and for whom Meredith's death was a shattering blow... so much so that she's chosen a path to self-destruction: alcohol, violent relationships... Will she wake up before it's too late?

It's another great tale in the series. We finally get to know the real Mika, not the one everyone else sees; we get to know her feelings, her anxieties, her fears through her own eyes. And we accompany her when she finally admits she needs help...
Again, the book touches on an issue that is so important and so often ignored or misunderstood by societies in general: alcoholism... It's so easy to judge an alcoholic or discard them as trash... What Ms Hamilton does is remind us that behind each alcohol abuser there is a story - a tale of despair, a tale of grief, a tale of depression, a tale of helplessness, a tale of hopelessness... But she also reminds us there is hope for everyone if we only allow it to enter our lives...

It's a wonderful closure to the wonderful series of tales of women who face so many different problems, but come out of their turmoils stronger, wiser, more powerful in mind... Thank you for the journey, Ms Hamilton, it was a real pleasure to meet all of them:)

Narration by Ms Hazen was also wonderful throughout the whole series; so many women got their feelings, anxieties, fears, but also joys and triumphs voiced out thanks to her:) Her interpretations of all the stories were very well done, making the women seem real to us.
And there's a real treat at the end of this final book in the series: Ms Hazen tells us what the journey with 'The Year of Discovery' series meant for her personally, how it influenced her as an actor, as a narrator and as a person. Thank you for that, too, Ms Hazen:)

December: The Year of Discovery, Book Twelve was a great read by M.L. Hamilton. Mika was the youngest of the three sisters. She was sent into a tail spin when her oldest sister, Meredith, died. She decides to self-medicate with alcohol and was in an abusive relationship. Her ex-boyfriend makes bail and she is scared about what he will do. Brendan is a recovering alcoholic who sponsors her. I really enjoyed reading Mika’s story and can’t wait to read more by M.L. Hamilton. Kelley Hazen did a great job of narrating the characters so that you want the best for them.

What an incredibly emotional ending to a magnificent series. Mika was hit hard by the death of her oldest sister. Her coping mechanism was alcohol... in order to survive, she must face her demons.

M. L. Hamilton gets to the heart of the matter in each of her stories. The characters are real and the emotions are raw. This is the final book in a powerful and touching series.

Kelley Hazen is one of the finest narrators I have listened to. You can tell that she really knows the characters and gives them the perfect voice. I can’t believe how emotional I get when listening to her performances.

I highly recommend this book as well as the other 11 books in The Year of Discovery series.

I'm late to the party, and this is a new to me author that I'm enjoying. I think family and friends coddled Mika and contributed to her unsuccessful battles with alcohol. Brendan was a light in the darkness for Mika, but will she see the light and follow it out of the fog and dark, or will she wallow in sadness and her illness??Brendan did a fantastic job of paying it forward and helping Mika move forward with her life. I'd go so far as to say he saved her, because she never would have done it without his tough love. I voluntarily listened to a free copy of this story and am giving an honest review. The narrator did a good job with voices of females and was okay with the male voices.

I was voluntarily provided this free review copy audiobook by the narrator and found it as inspiring and the perfect ending for the series. Mika world crumbled when her sister died, and for a year she has watched women all around her take control of their lives as she stumbled into theirs. But for Mika, she had to hit rock bottom first, and find someone willing to help her, help herself. An inspiring series, the author has such a talent at creating "real" feeling characters and the narrator brings them to life. Very much worth listening too.

I’m totally enjoyed this Year of Discovery Series and this is book 12 (last one sorry it ends). The primary character in this book is Mika who has been the problem child of the family and alcoholic who finally hits rock bottom after her abusive ex-boyfriend is released from jail and comes to her agrees to help from Brendan (a recovering alcoholic). Just listen to find out what happens it was great. I was given this free review copy audiobook at my request and have voluntarily left this review. Thank You!