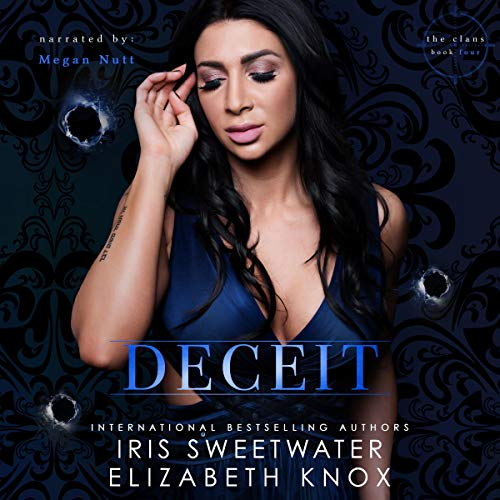 By: Elizabeth Knox,Iris Sweetwater
Narrated by: Megan Nutt
Try for $0.00

My best friend asked me to marry his sister...so I did everything I could to ensure it.

I've been after Aria Funar for years, wanting her by my side, craving that woman and her spirit. Over the years I had watched her grow up and turn into the woman she's become. After a traumatic event happened to Aria, her father branded her as damaged, irrelevant, she was deemed useless to him.

Now, and only now am I worthy of marrying his daughter - because the tragic things that have happened to her ultimately brought her down to my level in her father's eyes.

She isn't this broken little thing, and seeing the demons she battles every day destroys me.

I made a promise to Aria, that I wouldn't allow anything to ever harm her again.

I'm not a good man, in fact I'm the exact opposite.

I'm a monster, but I'm her monster.

What listeners say about Deceit

I liked this!! Salvatore and Aria might be my favorite yet in this series of books.

The story was good, the characters are awesome. Megan Nutt as narrator was an excellent choice. Her voice is pleasant, her accents are good and she’s just nice to listen too!

The narrator did an awesome job of bringing the book to life and drawing me in. As with all the clan books there is a ton of action and romance to keep you entertained.

This book had a lot more twists in it.
Although the beginning wasted somewhat difficult to get through. After that, I enjoyed the story between Salvatore and Aria. Aria was a very strong woman and a survivor.

Loved the way the story was played out. The characters were interesting. I could not get enough of this book.
The narrator was clear in speaking and easy to understand.
Thank you for you allowing me to review your book.

This book has such bad characters who freely admit to being bad so it’s surprising just how much love it also has, it was a fantastic listen can’t wait to read more