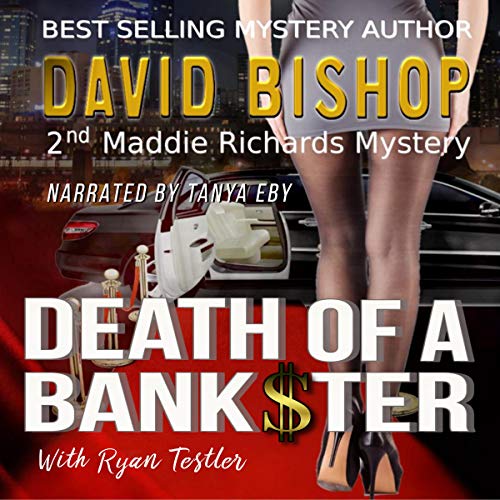 Death of a Bankster

Maddie Richards finds herself in the middle of a case which starts with the sights and sounds of just another murder investigation. A woman claims her husband, a banker, was murdered. Later, Maddie learns that the woman had begun divorce proceedings the day before she claims a bullet had taken her husband from her. The murder greased her path to not only ending her marriage, but negating any need to divide their marital property. Then the wheels come off and nothing about Maddie’s case is what it seems.

On her day job, Maddie continues to work her strange and twisting investigation. At night, she is increasingly taken with the most unusual and fascinating man she has ever known - Ryan Testler.

On his day job, Ryan carries out his latest mission in his usual over-the-line style. Along the way, the sparks between Maddie and Ryan get hotter and hotter while they struggle to resolve their conflicting views on justice and whether the end can justify the means.

What listeners say about Death of a Bankster

Twists and turns, lots of suspects and plenty of motives keep you guessing to the end!

I like to read homicide detective fiction because the good guys really are and the bad guys get hosed whenever possible. Like in this book, but along the way are twists, turns, and more red herrings than a Bergen fishmonger. Personal lives of the law enforcement involved as well as those surrounding the victim are explored as well, rounding it out to a very fine read.
Narrator Tanya Eby was excellent as usual!
I won this audiobook in a giveaway! I really win!

The premise of this book is good, but I found it to be kind of silly and unbelievable. It is filled with cliche's and old sayings, as Paige's mother says, "We had much more colorful language in my day." At first, I found it sort of cute and then just plain annoying.

Kudos to Tanya Eby, who does a fine job narrating this story. Her character voice variations which made it easy to know who is talking.

Who can you trust?

I was given this free review copy audiobook at my request, through Audiobook Boom, and have voluntarily left this honest review.

I always like to preface any reviews I give with this information.
I am a 68 year old female who has been an avid reader since I was around 10 or 11 years old.
I also want to add this as it may be pertinent to the kinds of reviews I give.
The first books I read were the Nancy Drew mystery novels by "Carolyn Keene."
I then proceeded to ingest everything that Sir Arthur Conan Doyle had written, then I moved on to Agatha Christie mysteries. By the time I hit the age of 15, I was into science fiction as well,and there were new horizons and worlds to explore through reading. As I matured I branched out into many different genres of books but Mystery and Science Fiction are still among my favorite reads.
I read mainly for entertainment purposes although I do a lot of research in areas of personal interest.
I have a great interest in many things. Ancient History and Archeology are at the top of a very long list.

Review:
This is a review of the audiobook version of: Death of a Bankster: A Maddie Richards Mystery, Book 2

This is my first experience with any of David Bishop's work. This is book 2 and I wondered if missing the first book would impact this experience. I don't think it did, or could!

This is a tightly written story that drags the listener along! I listened to it in one setting and was left wanting more!

The novel revolves around Maddie Richards, a homicide detective with the Phoenix Police Department and the death of a Bankster, which is a crooked banker who was laundering money for people from foreign countries. The Bankster is like a banking gangster, in effect. The victim, Sam Crawford, was murdered as he was entering his home after returning from a trip out of the country. His wife Paige is waiting for him and her best friend Carla Ross is also there and see Mr Crawford start to step through the door and then he falls, and they see blood on the floor.
Ms Ross, being a registered nurse, ascertains that indeed Mr Crawford is dead and she is trying to comfort Paige.

Immediately, literally within a couple of minutes following this event; there appear several people, Special Agent Dennis Powell and his partner Ann Withers who had the victim's home under surveillance and tell Paige Crawford, (the widow) and her friend (Carla Ross) they saw the direction where the shooter was stationed when the shot was fired and have it on videotape.

Again, immediately a Medical Examiner shows up and Special Agent Powell informs Mrs Crawford and Ms. Ross that Agent Ann Withers had contacted the M. E., before coming into the house.

Agent Powell extracts promises that neither Mrs Crawford, nor Ms Ross will say anything to anyone until a later specified time so that the agents have a chance to talk to the people at the bank and also the neighbors; without those people having prior knowledge of Mr Crawford's death. Agent Powell informs Paige that since the murder actually happened from outside the house that makes some of the investigation less time consuming.

Mrs Crawford leaves her house key with Agent Powell and she goes to her friend's house to stay there.
After Agent Powell has done the investigation, he brings the key to Mrs Crawford and again reiterates that he will contact her in a few days.

When the time passes and Special Agent Powell doesn't contact Paige or show up, Paige goes to the police station and talks to Maddie Richards and her partner.
Mrs Crawford explains all that had transpired to Maddie; and Maddie starts checking and finds that she and her partner are confronted with a baffling case of a supposed murder without the body of the victim, and only the victim's widow and her best friend to corroborate these puzzling facts.

I don't want to give away any more of this amazing story. There are many subplots and the story line is orchestrated so very well.

I noticed from reading a few other reviews that some people felt the book didn't have an ending. It did, just not in the usual sense. There were loose ends that did not get tied, so to speak. Because of the nature of the kind of story this is, it could very well lead to re-introductions to some of these characters in later books and I hope Mr Bishop will do that.

This is a superb book and I will definitely be either reading or listening to more of Mr Bishop's work.

Narrator: Tanya Eby
This is my first experience of listening to this voice actress. She has a wonderful voice with an amazing range and I was caught up in her performance and forgot that this was one woman doing all the speaking parts of this audiobook.
Ms Eby will be someone I will listen to in the future.