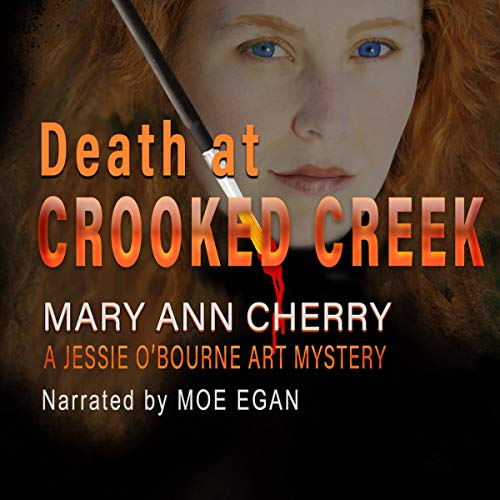 Jessie O’Bourne is delighted to be the invited guest artist at the Crooked Creek Art Expo held annually in Montana during March. Mother Nature is still blasting the area with snow and ice, however, so Jessie moves herself and her tomcat, Jack, out of her cold but beloved motor home, the Hawk, into the warmth and luxurious accommodations of the old log lodge hosting the art show.

When Jessie discovers a dead body was hidden in the Hawk during her absence, she’s thrown into a complex murder investigation tied to the death of a teenager. Soon, threatening notes and tiny toy tractors are delivered to her door, and she calls on her big Norwegian friend Detective Sergeant Arvid Abrahmsen and old flame Sheriff Russell Bonham of Sage Bluff to help investigate. Surrounded by painters and sculptors, Jessie is horrified to think that one of her talented friends is a killer.

FBI art theft Agent Grant Kennedy arrives in Crooked Creek to attend the auction and joins forces with Arvid and Russell. Their goal is to find the murderer before the latest death threat slipped under Jessie’s door becomes a reality.

What listeners say about Death at Crooked Creek

This book had just about everything you could ask for in a murder mystery. A bevy of great characters to care about, interesting backstories, a fast paced and plausible storyline, a trail of subtle clues, a cold case, sub-plots galore, and a fat spoiled cat to rule over it all.

They're is nothing formulaic about this book. Just a good story with a lot of clues to track down, including the dry wells, and the ones you didn't recognize as clues.

I had a fantastic time listening to this book on a long roadtrip and the miles flew by.

From a technical perspective, the audio track has some slightly louder spots, where I presume a splice was made over a bumbled word or something. It is very subtle but just enough to remind me that nobody can read that well in one take.