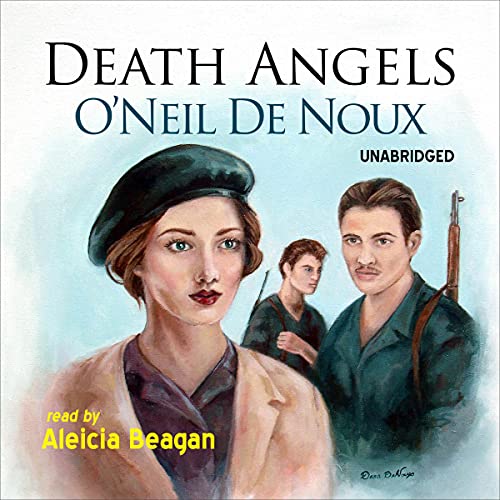 By: O'Neil De Noux
Narrated by: Aleicia Beagan
Try for $0.00

In Nazi occupied France during the autumn of 1943, an alluring young woman, two French resistance fighters and an American agent are brought together by the US Office of Strategic Services (OSS). Their code names are the names of archangels, including Samael, the angel of death. They call themselves Death Angels as they leave a trail of dead German officers and French collaborators from southern France all the way to Paris, as the City of Light prepares for her liberation. After derailing a German supply train, Louis and Jack set up on a rooftop above SS Headquarters to await the arrival of the Nazi commander who will be sent to coordinate the bloody reprisal for the sabotage. Expert snipers, the two manage to kill the officer sent and escape. Meanwhile, Arianne, who was a Parisian courtesan before the war, has been sleeping with the enemy, knowing her lover will brag about her and bring his friends to her where she will use her stiletto to slay a hero of the Third Reich. The OSS will team her with Louis and Jack after, along with a teen-aged compatriot Chico to form a secret cell of assassins.

It does not take long for the three men to become enamored of Arianne, but the team must focus on their missions as they leave bodies on their way to Paris, where their most important mission awaits their expertise.

Haunted by their pasts, filled with a seething hatred, they draw on their special talents for killing to form an unbreakable bond, even as the men fall in love with their most lethal member, the young woman whose passion for life is matched by her overwhelming desire to kill Nazis.

Writing Awards: Shamus Award for Best Short Story, Derringer Award and United Kingdom Short Story Prize. The 2011 Police Book of The Year by Police-Writers.com. Two of his stories have been in the prestigious Best American Mystery Stories annual anthology.

What listeners say about Death Angels