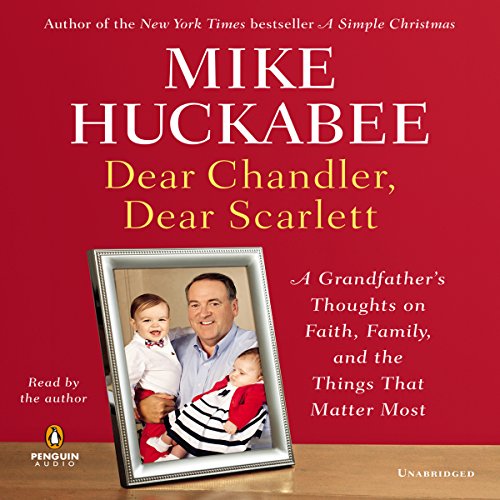 "I wrote these letters so that long after I’m gone, you’ll know that I loved you, had great hopes for you, and wanted to give you my best advice on living in this tough world. If I can't be there with you, I hope my letters will act as a sort of reminder of me - as if I’m standing there beside you, whispering in your ear, and putting my arm around your shoulder."

Mike Huckabee has worn many hats through­out his life: pastor, politician, governor, presidential candidate, talk show host, rock bassist, pundit, husband, and father. But since his first grandchild was born, he's found that the role of grandfather is more satisfying than just about any of the others.

Huckabee wanted to give something to his grand­son, Chandler, that would last forever. He began drafting a series of letters to Chandler recounting heartwarming stories from his past and the bittersweet lessons learned along the way. With the birth of his granddaughter, Scarlett, just a year later, Huckabee was further inspired to convey his love and wisdom.

Dear Chandler, Dear Scarlett touches on the time­less topics of faith, love, family, overcoming adversity, and staying true to your values in the face of failure and temptation. For instance, Huckabee tells how being forced to pick up pecans from the trees in his yard taught him the value of hard work. (“We were told that if we wanted to eat that night and sleep in a bed instead of in the yard, we’d pick up the pecans.”) Years later, he learned the real meaning of love after watching a friend care for his dying wife who could no longer recognize him. (“He loved her not because he enjoyed it or found pleasure in it, but because he had promised that he would never leave her until death parted them. And here he was, keeping that promise, faithful to the end.”)

Like his best seller A Simple Christmas, Dear Chan­dler, Dear Scarlett isn’t about politics. It’s a deeply personal, heartfelt, inspirational book that can be enjoyed by anyone. As Huckabee writes: “Although my advice comes from my personal experience and I’m writing with my grandkids in mind, I hope any parent, grandparent, child, or grandchild can take away some­thing valuable from these letters. I’ll try not to be too obnoxious, but don’t worry, if you ever sit next to me on a plane, I’ll still be happy to show you all the photos of Chandler and Scarlett I have on my phone.”

A Guide for All Grandparents

Would you listen to Dear Chandler, Dear Scarlett again? Why?

I plan to listen to Dear Chandler, Dear Scarlett again... after listening the first time, I now understand how it is organized and can now listen for details previously missed.

What other book might you compare Dear Chandler, Dear Scarlett to and why?

I have not encountered any work similar to this. There may be some out there, but this was a unique listen/read for me.

Which character – as performed by Mike Huckabee – was your favorite?

This is a difficult question as the work is a series of letters on different topics from a grandfather to his grandchildren. So, my favorite character was Grandpa Mike.

Yes, but it would be too much for sitting. It took me 3-4 sittings.

Genealogy is one of my hobbies. It is easier to learn about ancestors through events, dates, etc, than it is about their character and what messages they might have desired to pass on to their descendents. Governor Huckabee has done something very few people have thought about, let alone taken any action. Although not a simple task, it has inspired me to do something similar for my grandchildren.