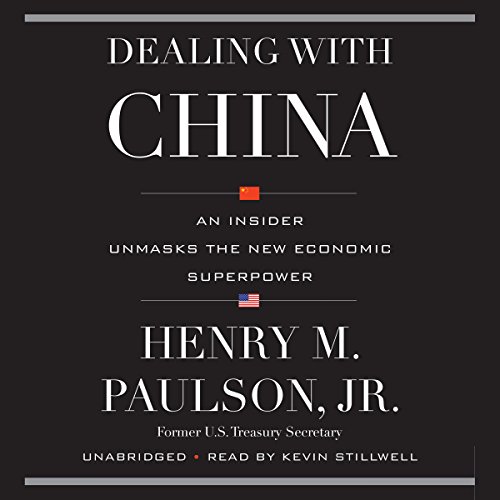 By: Henry M. Paulson
Narrated by: Kevin Stillwell
Try for $0.00

Henry M. Paulson, Jr., former secretary of the US Treasury and CEO of Goldman Sachs, delivers a behind-the-scenes account of China's rise as an economic superpower.

When Hu Jintao, China's then vice president, came to visit the New York Stock Exchange and Ground Zero in 2002, he asked Hank Paulson to be his guide. It was a testament to the pivotal role that Goldman Sachs played in helping China experiment with private enterprise. In Dealing with China, the best-selling author of On the Brink draws on his unprecedented access to both the political and business leaders of modern China to answer several key questions: How did China become an economic superpower so quickly? Who really runs China? How does business get done there? What are the best ways for Western business and political leaders to engage, compete with, and beat China? How can Western investors profit in China?

What listeners say about Dealing with China

Listened to the book then bought the print copy

What made the experience of listening to Dealing with China the most enjoyable?

This amazing book gleaned from over 100 visits to China is truly an inside story. It is a very personal account of Hank Paulson's three different roles interacting with the most influential leaders in China during its years of rapid economic development. First, as CEO of Goldman Sachs, playing the role of investment banker taking inefficient state-owned enterprises (SOE's) public and counseling Chinese leaders on need for financial accuracy in order to attract investors. Second, as statesman and Secretary of the Treasury for George Bush, meeting the financial crisis in the United States while assuring the Chinese of our ultimate recovery to prevent dumping of their U.S. investments. Third, as environmentalist for the Nature Conservancy in China, counselor to Chinese environmentalists and urban planners, and founder of the Paulson Institute,Hank and his wife Wendy continue their passion for preservation of China's open space and curtailment of pollution.

What other book might you compare Dealing with China to and why?

An earlier reading of Henry Kissinger's "On China" gave an excellent background of the historical background of the country and its unique cultural characteristics, from ancient civilization through classical empire, to Communist state. His accounts as U.S. Secretary of State during President Nixon's visit to China and subsequent events give an authoritative account of engagement with China. Later, Kissinger's book on "World Order" draws contemporary comparisons with other countries, falling short in details on China as he lumps it in with the overall Asian region.

What does Kevin Stillwell bring to the story that you wouldn’t experience if you just read the book?

Kevin Stillwell's vigorous and emphatic narration brings out the self-confident nature and negotiating ability of Paulson that complements his persistent efforts to always reach "win-win" results for both sides. Also, although difficult for an English speaker to keep them straight, Stillwell rattles off the Chinese leader's names with apparent accuracy without interrupting the flow of the narrative.

One of the most interesting stories came when Paulson and another Goldman employee were in a plane with only a pilot headed for Hong Kong in 2001. Suddenly, news of the 9/11 attack came in over the radio. News of the disaster continued to unfold while Paulson spoke over the phone with the Goldman Sachs' New York office a short distance from the burning Twin Towers at Ground Zero. Paulson ordered the pilot to turn around and head back toward New York. To find out what happened next, you must get the book.

The printed book contains some features understandably lacking in the spoken version.A Cast of Characters section in the back of the book clarifies the names and official titles of the people. A List of Acronyms gives handy reference to the confusingly similar names of the organizations heard throughout the book..

A Valuable Book on China

Many thanks to Hank Paulson for sharing numerous very interesting and insightful episodes from his high-level dealings with business and governmental figures in China.
Those experiences offer a vivid picture of a China that is far different from the single-minded monolith as often portrayed in the daily press and in many of our political debates. Like us, the Chinese grapple with financial, environmental and economic challenges. Although the Chinese political system is far from democratic as we know that system in Western countries, it is quite interesting to see evidence in the book of Chinese leaders’ genuine concerns for maintaining the confidence and respect of their citizens through civilized means. For a Communist government, that is certainly a sharp contrast with the methods of Stalinist Russia and of China itself during its so-called “Cultural Revolution” of the 1960’s.

The book is not a fawning tribute to all that the Chinese have accomplished since 1979 in the economic realm. Mr. Paulson spends time in the book on the problems in China arising from short-sighted and often corrupt government practices, as well as the daunting environmental and social problems that have accompanied an often heedless focus on economic expansion. It does offer very practical suggestions for our dealing with China in constructive and responsible ways—particularly by focusing on areas of clear common interest where we can work on problems together to our mutual benefit.

I strongly recommend the book. That said, Mr. Paulson would be the first to admit I suspect that he is not a literary star. His writing style relies largely on stock figures of speech rather than penetrating turns of phrase. Some of the latter parts of the book could also have benefited from sharper editing—they fall at times into generalities that could have well come from a text book. Still, the stories he tells are unique and illuminating, more than compensating for any literary shortcomings.

Full of admiration and respect to Secretary Hank Paulson

This is a rare book to understand the inner detail of successful dealing with Chinese Leaders and how Secretary Paulson can objectively understand the Chinese way of thinking with empathy , how he resourcefully solve serious issues to benefit China- American relationship with courage, always Win-Win, how he selflessly help China on conservation of Nature and thus gain Chinese Leader's trust . This trust tremendously gained positive action from Chinese government during the 2008 financial crisis to support USA strategy .
I have the highest respect to Secretary Paulson for his love of America , passion and courage to do the RIGHT THING .
It will be a blessing that the next President of United States will seek Secretary Paulson 's expertise to shape a Win- Win strategy in China strategy . It is obvious the Obama 's China strategy lack understanding of Chinese Leaders and created mistrust and confrontation .
God bless America?

Couldn’t they find someone who can pronounce chinese to read this book?

The book and story itself is nice. I just couldn’t stand the narrator who botched every pronunciation of chinese names, to the point where it makes it hard to identify who he is writing about

I was surprised to see a book by Hank Paulson, former US Treasury Secretary, entirely about China.

Mr Paulson was Goldman's senior go-to man for China for a very long time, before and after becoming CEO. Nowadays, thanks in no small measure to him, the US relationship with China is handled from the Treasury. Once retored from.public life, the Paulson Institute centres on China and on conservation, two of Mr Paulson's loves.

After On the Brink, Paulson shows himself to have been a real asset to the US (one of the best Treasury Secretaries in recent times, in my opinion) and to China. He has helped China move closer to the West, at least in terms of economic development and reform. For that, this book is worth buying and reading.

As well as the interesting stories, one gets to learn a lot about how China has developed after Tiananmen. Having listened to the audiobook I want to learn more.

It is a very informative book.

It is a very informative book. Mr. Paulson knows more about China even than an ordinary Chinese because of his unique experience.

Hank Paulson is truly a China hand. He shares his valuable experiences in China. Anybody that wants to understand China should read this book.

A Long, Boring and Recommended Book

A private meeting with a high-ranking Chinese official ??? Impressed enough ??? Guess what, that's when and where the Great Delusion and the Drama (for Westerners) begins.

Should they (Westerners and/or Americans) have done their job right in the first place, there wouldn't be a need for this book.

(P/S: The author called some Chinese leaders 'old friends'. Well, Mr.American, Chinese people don't make friends with non-Chinese. You just happen to be useful for them for a while.)

Wow! I enjoyed this book so much- I learned about what is important within the Chinese culture and what the business language should look like- Chinese culture is very different than the west. I was impressed with the amount of details describing the day to day and the history of telecom-

It starts off a little slow unless one is interested in bond financing and banking. But the last half is packed with events that have shaped our modern world. The listener should not lose heart in the beginning because this book will provide vital perspectives into modern China.