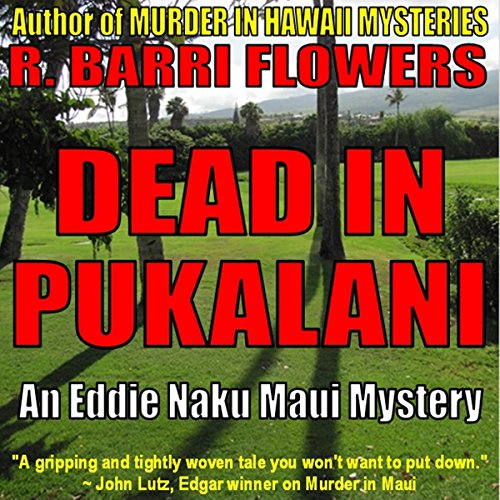 Private investigator Eddie Naku is hired by attractive divorcee Kathryn Higuchi on Maui to investigate the murder of her sister, Suzette Higuchi Bordeau, wife of a well-known criminal defense attorney. She was gunned down in a shopping center in the Upcountry region of Pukalani.

What seems like a routine case for the ex-police detective turns into a complex murder mystery as Naku uncovers a web of lies, deceit, arms trafficking, infidelity, seduction, betrayal, and more murders as he tries to solve a deadly crime. In the process he becomes a target and must identify the killer or killers before he winds up breathing his own last breath and leaving life in paradise behind.

Honolulu fashion designer Kiyoshi Yoshida had just gone through the worst year of her life after her twin brother, Sergio Matsuko, one-time dedicated and decorated homicide detective for the Honolulu Police Department, was identified as the Aloha Black Scarf Killer, a serial killer who had raped and murdered seven women. He committed suicide before he could be apprehended.

Kiyoshi relocates to Maui, hoping to escape the notoriety, but is pursed by a true crime writer hoping to get info about Matsuko for a book. Also watching Kiyoshi is a stone-cold killer waiting for the right time to add her to her list of victims.

Dead in Pukalani will keep you entertained and in suspense from beginning to end as a Hawaii mystery and spellbinding listen in the spirit of aloha!

What listeners say about Dead in Pukalani

This was another good mystery by R. Barri Flowers taking place in beautiful Hawaii. There were quite a few twists and it kept my attention well. I enjoyed the narration by Jane Boyer (this is the second book I've listened to that she narrated). She does a good job with character differentiation, so I always knew which character was speaking. I also liked the mention of Leila Kahana in the book as one of Eddie Naku's former lovers, since I just recently finished listening to one of the Leila Kahana Mysteries (also by R. Barri Flowers). I just thought it was kind of fun to see the crossover between the different series. All-in-all, a good mystery for those who like police mysteries, or those who want to take a virtual vacation to the island of Maui.

For some reason I had a hard time getting into this book initially. Once I got going I really enjoyed it and I especially enjoyed the 2nd story that was included with the book. Overall this was a very enjoyable read and a good who dunnit.

I listened to the Audible version of the book and I initially didn't like the narrator but as I got used to her style I actually grew to enjoy her. I recommend speeding up the playback, that helped me. Again by the s 2nd story I was thoroughly enjoying the book.

I was given this audiobook in exchange for an honest review.

My Review
An intricate mystery, full of detail which made it a little hard for me to keep up with at times. Nevertheless, a good plot well told with plenty of twists to keep the listener guessing. Quite a twist at the end but there are a few clues in there for the diligent!
I enjoyed how the author dealt with how one of the characters found themselves embroiled in an unexpected moral dilemma, this added a sensitive dimension to the mystery.
There's not much more I can add to the comprehensive publishers summary without giving spoilers! All in all, an enjoyable listen, just make sure you are able to give it your full attention or you may miss out.
I can't really comment on the authenticity of location detail as I've never visited the place, but I did enjoy the descriptions of the area.
The bonus novella is certainly well worth a listen, thoroughly enjoyable, so thanks for that.
Narrator
This is the second audiobook narrated by Jane Boyer I have listened to, she does a good job, but I had to increase the speed to 1.25 in order to listen comfortably. The sound quality is not the best, distorting the clarity of her voice a little, however, for whatever reason, it did improve or maybe I just got used to it. The recording didn't do Jane justice, as she does narrate well, she conveyed the various emotions well, and in a murder mystery there are plenty! I had no problem in differentiating the many characters. I thought Jane did a good job, but she deserves to work with better recording equipment.
This audiobook was provided by the author, at no cost in exchange for an unbiased review courtesy of AudiobookBlast dot com.