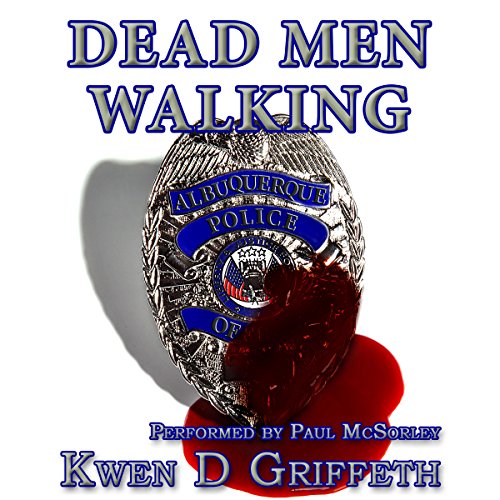 By: Kwen Griffeth
Narrated by: Paul J McSorley
Try for $0.00

There was no doubt the man was dead. A bullet through the head will do that. But, who was dead? The man had no identification, no known address, no Social Security information could be found, and the fingerprint search came up empty.

Detective Nate Burns, Albuquerque Police Department, knew two things. The man was dead and he was blood type O+. The most common type of blood in the country.

Dead Men Walking, is a fast paced police drama that tells the story of Detective Nate Burns, a man haunted by his past. That haunting has suddenly appeared in the present.

His Captain wants him fired.

A friend is calling in a favor.

A convict wants to make a bargain

His wife is thinking of divorce.

It's a good thing he's serving a suspension. He'll find time to work all this out.

Dead Men Walking, is the follow-up to the award-winning, first Nate and Clare novel, The Tenth Nail. The story continues with Nate being assigned to a most difficult case. At the same time, he is trying to salvage his marriage, and since his wife, Clare, has returned to college, he must make sure he is not late picking up his daughter from her summer reading class.

Nate is back and better for it

Nate was a real jerk in the first book, The Tenth Nail. To be honest, he just wasn't a 100 percent upright guy. He was really fallible and behaved questionably. The swign of a good book is when you get to see character growth. While he isn't perfect, Nate does see some growing pains that accompany his shift in character, he is improving. He and his wife get along, and it is about time we get to see someone (Claire) who is devoted to their marriage.

I guess you want to hear about the good stuff? Well, if you read the first book you know that Nate received a little time off and has to go to counseling before he is apermited to return. He and Claire struggle, but are dedicated to overcome his issues with monogamy and rebuild their marriage. But, the mystery of a murder creeps in to his life, and in order to help a buddy Nate reopens old wounds, and it turns out that what he thought were faded scars actually ran deeper than he realized.

The book is outstanding, and I feel it is an improvement on the first book, but then we should always grow and improve. McSorely really has Nate down to a Tee at this point, he plays the haggard detective smoothly, as if he is doing an imitation of someone he knows. It's either that or he is lterally channeling the spirit of some Chandleresque detective. Anything is possible!!!!

This is powerful character study, a marvelous mystery, and a book you won't want to miss. Get book one while you are at it!!!! Even though I did receive a promo code for this review it in no way influenced my considerations of the material, and in fact, inspired me to be more honest. In fact, getting a code generally makes me harsher as a reviewer as I am more often concerned what someone like Me will decide based on my review.

I didn't see that coming!

Kwen Griffeth is an excellent mystery writer! He grabs your attention from the very beginning with all the twists and turns and holds you spellbound right up to the very end.

Paul J McSorley has a dynamic voice that brings the characters to life.

This is the story of a detective who is on medical leave after an injury who does not want to participate in counseling but when he reluctantly does so he is re-injured. The whole story is about his struggles to restart his life.

This story is the constant struggle to survive and is well written and believable. The narration is great.

This book was provided free with expectation of an hones review.

Another winner. More in this Nate and Clare series, please.

This listener is once again extremely satisfied with a suspenseful thriller from Kwen Griffith and Paul J. McSorely, following a truly loving couple, Nate and a Clare, as they struggle through some difficult personal issues as Nate investigates a mysterious and somewhat suspicious
case. A taut storyline by Griffeth, along with unusual and quirky characters brought to life with McSorley’s brilliant and skillful vocal talent. As far as I am concerned, he could read the dictionary to me. I admire his deep and sexy voice. Thank you to both author and narrator for another Nate and Clare winner. Extremely Highly Recommended. Well worth the credit.

I loved this book! I couldn't put it down. The story king is great the connections with the characters was amazing and of course I'm left wanting more! The narrators voice I can't get enough of! Would recommend over and over! It warmed my heart the connect between the main character and his wife and of course at the end I was crying!!

I was pulled into this book by Kwen Griffeth. This is a follow-up to The Tenth Nail, with continuation of Nate and Claire's relationship. The book has highs and lows in their relationship and cameo appearances by characters from the first book. Some secrets are revealed. This book is a standalone listen and part of a series. The story has some emotional scenes, some humor, and redemption. The narration by Paul J McSorley was spot on perfect. He adds the right emotions, gravity, and distinguishable characters. I will definitely listen to more books by this author and narrator.

This book is like visiting with old friends . I enjoyed hearing more of Nate and Clare’s story. I loved this couple from the beginning; and now I love them even more. Clare learns Nate secret as Nate works on another mystery with his old friends, as well as a few new characters.

Still grieving the loss of his old partner, he finally starts therapy and begins to open up and his journey of self discovery reveals so many more surprising secrets. I recommend you read this book so you’ll be as shocked as I was.

I love these characters, their stories and this series. I can’t wait to hear more! This is a Huge 4 ½ star book!

The storyline to this book is great. The narrator does a good job of telling the story. I would recommend this book to anyone A+++

It is a great read/listen. Second book in the series, storyline even stronger than book 1, Nate and Claire become real people in this book combined with a first rate detective mystery/thriller.
Paul J McSorley bring Nate to life - I can't imagine anyone else as Nate.
The writing of the author and the narration paired together seamlessly.
I recieved a free copy of this audiobook at my request and voluntarily leave this review.

I highly recommend this book, and also recommend any of the author other works. They are all good reads.