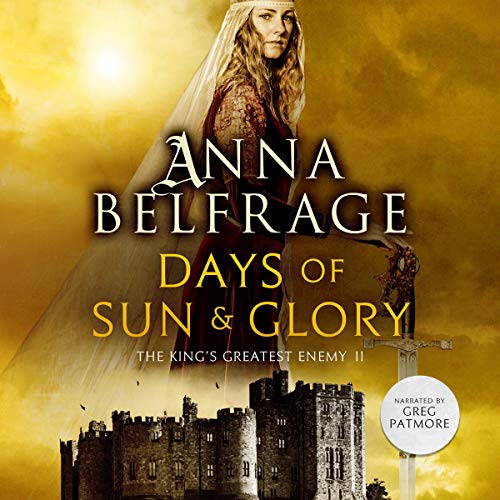 Days of Sun and Glory

By: Anna Belfrage
Narrated by: Greg Patmore
Try for $0.00

Adam de Guirande has barely survived the aftermath of Roger Mortimer's rebellion in 1321. When Mortimer manages to escape the Tower and flee to France, anyone who has ever served Mortimer becomes a potential traitor - at least in the eyes of King Edward II and his royal chancellor, Hugh Despenser. Adam must conduct a careful balancing act to keep himself and his family alive. Fortunately, he has two formidable allies: Queen Isabella and his wife, Kit.

Late in 1323, England is a place afflicted by fear. Now that the king's greatest traitor, Roger Mortimer, has managed to evade royal justice, the king and his beloved Despenser see dissidents and rebels everywhere - among Mortimer's former men, but also in the queen, Isabella of France.

Yet again, Kit and Adam are forced to take part in a complicated game of intrigue and politics. Yet again, they risk their lives - and that of those they hold dear - as Edward II and Mortimer face off. And yet again, England is plunged into war - but this time it will not end until either Despenser or Mortimer is dead.

What listeners say about Days of Sun and Glory

This is my first book for the author and I am glad I got. It is very different from the normal historical romance. Rich in history and beautiful romance. The performance is equally outstanding.

If you’ve read / listened to Book 1 in this series (In The Shadow of the Storm) then you’re probably very eager to continue the saga, and you really, really hope this one is as good as the first. Good news! It absolutely IS as good! Everything I said about Book 1 is true for Book 2, so spend your credit with confidence- you won’t be disappointed.


Here’s my review of Book 1 (In The Shadow of the Storm) as it is also relevant here:

This book is like those people in our lives (maybe you’re one of them) who are blessed with beauty and brains- Miss Universe with a Ph.D. in European History from Oxford. Yes, it definitely is a solid romance, with all the requisite steam, but what sets this one apart is the author’s skillful rendition of the story’s setting. Rather than a dry documentary, this tale provides all the facts surrounding King Edward II/Queen Isabella/Edward III/Roger Mortimer/Hugh Despenser in the context of what it was like to live during that time. Walking down the street in 13th century London, for example, with all the squalor and despair that pushed starving street urchins to brutality in order to survive. The utter ruthless nature of successful leaders and the absolute vulnerability of everyone else. The tenuous hold on life that touched every single person regardless of age or class. She brings to life all those details and makes us FEEL right along with the characters. The narrator is absolutely spot on, whose widely ranging talent provides the final dimension needed to fully immerse the listener. No joke, there are situations (misogyny, domestic violence, rape, torture) which may be difficult to get through, but they are presented right along with other behaviors that were accepted for the time and enhance, rather than detract from the texture of the writing. So, now that I have experienced this level of historical accuracy and moving prose in a romance novel, it will be a little disappointing going back to the usual fare. Absolutely worth a credit.