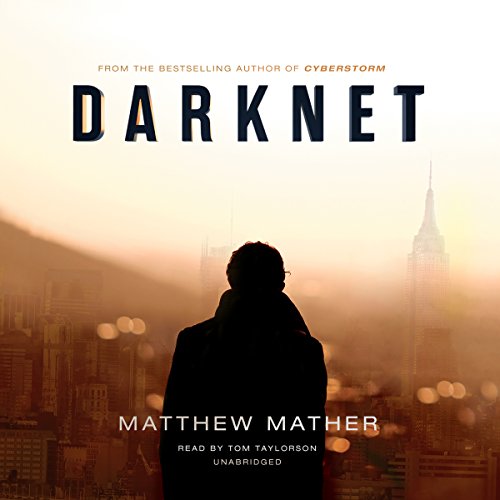 By: Matthew Mather
Narrated by: Tom Taylorson
Try for $0.00

From the best-selling author of CyberStorm comes a wild ride through the Wall Street underworld.

One minute Jake O'Connell is on top of the world, with a beautiful family and bright future as a stock broker in New York; the next it's all ripped away when he's embroiled in a fraud investigation, his childhood friend is murdered, and he finds himself on the run. Dodging the FBI and targeted by the Mob, Jake is thrown into a Wall Street underworld of crypto currencies and autonomous corporations, where he discovers a dark secret setting the world on a path to destruction. He must evade the shadowy forces hunting him and find a way to redemption - but the faster he runs, the deeper he becomes entangled. In the end his only path forward is to return to the ghosts of his past.

Darknet is a journey into the back alleys of global finance and cyber espionage, the story of one man's quest to redeem himself and save his family.

What listeners say about Darknet

It wasn't as good as Cyberstorm for me...

Hmm, I wanted this to be more or equal to Cyberstorm. But it just didn't hit the same spot for me. I found myself continuously getting lost while it jumps around. It maybe a book that demands more concentration than what I was willing to give. So I gave it three stars.

Plot holes, weak motivations, shallow characters and shortcuts galore. Nothing like this author's other pieces. This feels like a rushed job. Spend your money elsewhere.

I want to give up but I AM NOT A QUITTER! But really, the story is so danged boring I've been playing it when I can't sleep.

Had hopes for this book but they didn't pan out. Some of the reviews that are high must be marketing ploys. Just too predictable in the plot and many of the main characters were flat. And some of the narrator's voices also really irritated me. I made it about halfway through (on kindle read and listen) and decided j had better things to do with my time, like clean the kitchen. C'est la vie..

Good, but feels "not quite ready for prime time"

The reader has very little inflection or emotion to his voice. It sounds to me like he would be equally at home reading a book or narrating the encyclopedia. His voice is quite monotonous and if it weren't for the storyline, I would have deleted this book a long time ago. I don't think I would select another book with him as the narrator.

The storyline is interesting, but seems a bit rushed - seems like there's not quite enough background story or detail, and the story jumps from scene to scene, seemingly without preamble, story setup, or scene conclusion. The storyline itself is interesting enough, but (especially compared to the other authors I usually read) seems to need to be "fleshed out" some.

At first I thought MM sent this outline into his editor, who skimmed it and thinking it was a book sent it to the publisher. Another reviewer said it seemed rushed. Rushed writing would explain all the telling and explaining and talking. Then I checked my review on Atopia and it seems this is just how this guy writes. He has good concepts, but needs a ghost writer. The narrator does not help.

over hyped in Cyber security circles.

over hyped by Cyber security circles. Did not live up to expectations of plausability. Some interesting ideas were presented but there was far too much filler prose for my enjoyment.

Great premise but jumped all over the place

I gruelled through the whole thing, but it was not a pleasant experience. The story jumped all over the place. The narrator was very good, but there seemed to be few breaks between scenes and it was disconcerting. The story was meh and ended anti-climactically. I really wanted to like this.

The main characters will annoy you.

Not a question i can answer.

Would you ever listen to anything by Matthew Mather again?

Yes. I listened to Cyberstorm. This is nothing like that.

What character would you cut from Darknet?

All the main characters. The supporting characters drove the storyline.

*Spoilers follow, but i don't think it matters*
I have been listening to a majority of this book at a speed of around 2x because i don't care about the plot anymore. I find the dialogue of the main characters sickening to the point that i actually yell at my radio "are you that stupid?"

Both characters Jake and Jin take absolutely way too much time understanding the severity of the situation they are in. At many times I keep waiting for the supporting characters to criticise the mains for asking the most mundane and stupid questions for almost everything (one does, but doesn't make me feel better).

Both characters are on the verge of death for a majority of the story, but their naiveness over why overshadow the story. Jake works for wall street shady types, been for years. Boss is cryptic, gets arrested, Jake accused of rape, loses wife and daughter (and doesn't fight for them) flies to remote canada, watches guy get shot, blows up a cabin, crashes a plane, avoids death indiana jones/james bond style, and still the more important flaw is that he needs his sleep. His traits don't me make like him at all. i don't care they took his daughter, because, quite frankly, you don't get the sense he cares.

Jin character is portrayed similarly, being a hacker, but for different reasons.I will finish this book because i want the stat. And the plot of the story is quite interesting, but the lame character plot destroys what could have been.

I loved Cyberstorm. I had an emotional connection to those characters.

This story made me keep asking: If the supporting characters know almost everything about what is going on, and the main characters work on the inside and are this stupid...why aren't they dead yet?

My opinion of this book: im so detracted from the story i don't really care how it ends.