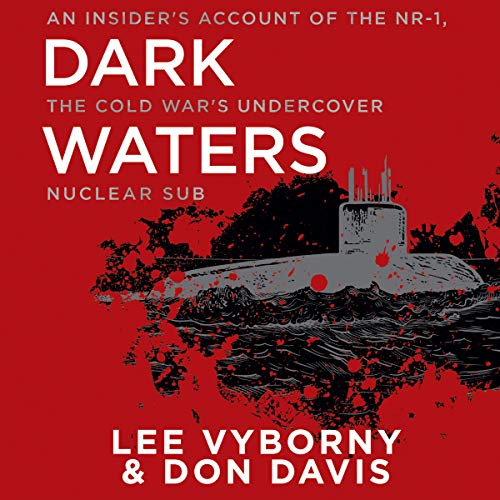 By: Lee Vyborny,Don Davis
Narrated by: Braden Wright
Try for $0.00

Operating alone and unarmed on the bottom of the sea, the U.S. Navy's smallest nuclear-powered submarine is one of its biggest weapons. Tied up at a pier, the boat with the bright orange sail looks absolutely minuscule, innocent and out of place beside its big brothers, the fleet's huge missile-carrying and attack submarines, but it can dive deeper, stay down for a month, and accomplish missions far beyond the capabilities of any of them. The ship has been cloaked in mystery. It wasn't commissioned or given a name, and even today it is hardly known beyond a select fraternity of sailors and scientists. They simply call it the NR-1.

The little submarine was born in controversy, served in secrecy, survived potential catastrophe on numerous occasions, and is still in operation almost forty years after being conceived. It was and remains the only one of its kind ever built.

The story of the NR-1 is told against the tense background of the Cold War and peopled with such rich characters as the acerbic Admiral Hyman Rickover, ocean scientist Robert Ballard (who found the Titanic), the designers and builders who faced almost impossible tasks to give life to the ship, the unique officers and sailors who took the little boat down into depths on covert missions, and the families who waited for them on shore, unaware that there would be no escape if the boat ran into trouble.

Dark Waters: An Insider's Account of the NR-1, the Cold War's Undercover Nuclear Sub is a thrill-a-minute book of submarine adventure, imminent danger, personal bravery, technological wonder and historic discovery. It will be a proud addition for listeners who love stories of the sea, history and intrigue.

What listeners say about Dark Waters

One of the best books on the subject. Simply put.

This is a book that I've already restarted twice and I'm on my third run-through. I don't really want to spoil it too much but this was an amazing account of the NR-1, Admiral Rickover's brilliant tactics and bureaucratic supremacy (and arrogance and tendency to be a mean bully!). I couldn't get enough of the tales of sneaking around in the Mediterranean, observing objects of interest on the sea floor and running salvage missions from the depths. Amazing narrator too, who did an amazing job expressing the intent of the authors. Thank you lee Vyborny, Don Davis and Braden Wright for this awesome partnership. Thanks for your Naval service and professionalism in putting this book + audio book together. I freaking loved this one. I've read all of then, Red November., Blind Man's Bluff, Scorpion Down, and probably 10 others in this non-fiction space. This is a stand out. So good.

This is one of the best submarine books I have ever read. Very well done and preformed. Would definitely recommend.

This story is so interesting. You will feel as though you were almost there. And the narrator is excellent. Enjoy.

The Best Need No Accolades

The first matter I must mention is in remembering the the men that went down with the Thresher and Scorpion, and it is our responsibility to pass their stories down to our descendants.
The book itself is a great read and or listen for those that love the lore of the seas.
I need to mention though the catalyst and founder of the "Nuclear Navy" and the USA answer to Capt James Cook, Admiral Rickover.
I want to mention the journeymen at Electric Boat for running one perfect bead over and over, and producing a mechanical marvel. The Admirals spirit will always be with the extraordinary men that man the boats today, and women who take up valuable space at the expense of others.
I cannot close without passing on to Adm Rickover he was a pissant and cannot thank him enough for just carrying out his orders. There was a day in the Oval Office where Rickover was in charge for 15 minutes.

very informative on a great submarine. you dont realize how hard their tasks were.
would recommend it.

Interesting story, style of pros odd to me.

I played this book at 0.8 speed as I kept missing elements. Th8s is the only book this happened to me on.
very interested in subject matter.

Not a lot of there there, but interesting nonetheless. Several times I thought some cool catastrophe was about to happen, just never did. No torpedoes, no Enigma, no meltdown, no collisions. Drove-around and got stuck in the mud; I laughed, I cried.

Not What I Thought It Would Be About

I thought this would be about how Soviet subs and US subs would track and engage each other, sort of another Red October thriller. But it’s a history of the development of the NR-1, the secrecy behind its use and some of its mission.

The story is interesting about the technology behind the NR-1 nuclear sub some of its missions that sometimes makes for harrowing stories.

It also demonstrates the trials and tribulations of serving under Admiral Rickover.

Narrator did a nice job in his reading.

Again my main disappointment is that the story was not what I thought it would be.

Word mispronunciations were annoying but tolerable. Interesting book on a fascinating submarine. I especially enjoyed the stories about ADM Rickover. Good, but not as good as some of the other sub books I have read such as Blind Man's Bluff, Wake of the Wahoo, The Bravest Man, and Red November.

The story and the idea behind it seemed great as a read. However the narrative was repetitive and the narrators voice almost robotic at times. After three goes and two hours of listening I gave up.