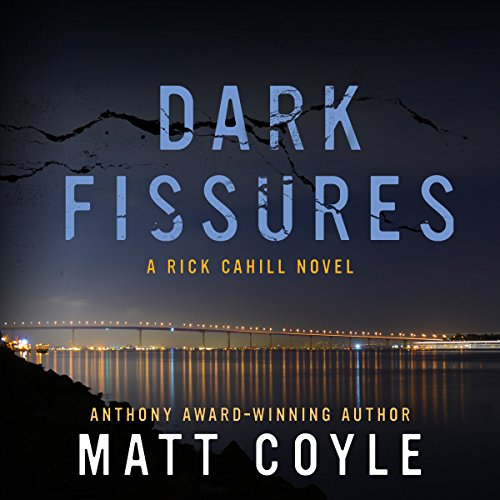 By: Matt Coyle
Narrated by: Travis Baldree
Try for $0.00

Private Investigator Rick Cahill fears the next knock on his door will be a cop holding a warrant for his arrest. For murder. La Jolla Chief of Police Tony Moretti is convinced Rick killed a missing person. No body has been found, but the evidence that's piling up says murder and it all points to Rick. With Moretti on his tail and the bank about to foreclose on his house, Rick takes a paying case that will stave off the bank, but pits him against Moretti and the La Jolla Police Department.

Brianne Colton, a beautiful country singer, is convinced her estranged husband's suicide was really murder. Rick is unconvinced, but the mortgage has to be paid. Each new piece of evidence convinces him she's right. He breaks his number one rule and falls for Brianne, even as he begins to question her motives.

As Moretti cinches the vise tighter, with Rick unable to trust the FBI, evil forces emerge from the shadows who will do anything, including torture and murder, to stop Rick from uncovering the truth.

What listeners say about Dark Fissures

This is first book by Matt Coyle book I've listened to and the first narration by Baldree I have experienced as well. The story is very well written. I enjoyed the characters and I was sad when the book came to the end. I can't wait for the next book in the series (this is the 3rd book). Baldree is a wonderful narrator! He has fantastic tone & expression and I practically listened to the book in one day because I was so engaged in the story. Baldree has made it into my top narrators list. He was able to distinguish the voices of characters better than most. Most of his female voices sounded very similar but his male characters were all distinct. I hope the next book will be read by him also. Dark Fissures is well worth a credit! 👍

Great old fashioned detective tale in modern times. An antihero with a good heart just trying to get through a blacklisted life. There are many instances where the narrator added to the overall feel of the story. An audiobook well done. I was voluntarily provided this free review copy audiobook by the author, narrator, or publisher.

gritty and to the point

Private Investigator Rick Cahill hasn’t quite recovered from his last brush with the law.  He’s confident it’s only a matter of time before the cops arrest him for murder involving a missing body.  In the meantime, he has a hot, beautiful woman seeking his help – her husband committed suicide but she’s not convinced.

Along the way, Rick has made lots of enemies that are hiding around each corner.  His attention is scattered between losing his home, police chief tailing him and other unknown persons stalking him – Cahill doesn’t trust anyone.  It’s only a matter of time before they get him or he gets them!

The narrator, Travis Baldree, does an excellent performance of this dark detective novel.  He kept the characters straight and even added to the vintage quality of the novel - his voice going gravelly for Rick.  He kept the action going with the right inflection of his voice.

A great listen for anyone who loves vintage detective novels with a dark background.  I listened to this as a stand alone, although there are others in this series.

There were no issues with the quality production of this audiobook.

Private Investigator Rick Cahill has his flaws but murder isn't one of them. When he is framed for the murder of a missing person, what follows is a fast-paced mystery with wonderful dialogue and plot twists. The plot and narration were both excellent. I found Dark Fissures to be very entertaining and I would recommend it.

Matt Coyle has done a fabulous job with this very interesting and well put together story. The plot is elaborate but suspenseful, with a diverse range of characters.
I really enjoyed listening to this book as it kept me guessing. The story moves along at a good pace, with lots of happenings, all the way through to a great ending. Well worth a read
Travis Baldree did a good job reading the book.

Amazing. Engrossing from start to finish.

I was planning on listening and reviewing this after some other audiobooks in my queue. This one jumped to the top as soon as I started listening to the beginning.

The writing...the narration...everything was amazing here. It turned out that this book is part of a series that I haven't read or listened to any other books from. That didn't hinder my enjoyment.

Characters are differentiated, the tone for everyone is spot-on, and the narrator can deliver all of the highs and lows the story asks for. There is humor, tension, terror, and plenty of intrigue. I was wrapped up in this story. Whenever I had to turn it off, I couldn't wait to get back to it.

Definitely recommended!! LOVED IT! Rick Cahill, the main character, was a dream. I loved his attitude. He was very engaging. The pacing of this work was also perfect - no lulls or dull parts here. I can't complain about anything.

I was given a copy of this by the writer, narrator, and/or publisher. I chose to give my honest review of this product.

Not Just another "Flawed" Hero

I truly enjoyed the characters in this book. It is pretty common today to have a flawed hero at the center of the story, but Rick Cahill is not just flawed he is seriously damaged, but he has a dry sense of humor, he is trying to do the right thing and you really do end up rooting for him in the end. The book left some unanswered questions, which is ok, since it is a series, I will be looking for more and hopefully I will get those answers.

The narration was spot on. I was hooked from the beginning and the narrators tone matched the action in the book perfectly.

DARK IS THE KEY WORD!

This book is full of murder, mystery and so much action. I enjoyed this book from start to finish. I even like the not so happily ever after ending. I like all the military, FBI and Police references. I love the main character Rick Cahill and the detective work he does.

"I was voluntarily provided this free review copy audiobook by the author, narrator, or publisher."

This is a good book.

If you like P.I.. novels then this is the book for you. It has a good story and the narrator is wonderful. I received this audiobook for free, but voluntarily reviewed.

I really enjoyed this quick paced mystery. Matt Coyle has done a great job with the plot and characters of this very interesting and well put together story. The plot is elaborate and suspenseful, with a diverse range of characters
I did not realize until researching the author that this was part of a series, It can be read as a stand-alone, but I do wish I had read the 1st two in the series to better understand references made.
Travis Baldree did an outstanding job on the narration.
“I was voluntarily provided this free review copy audiobook by the author, narrator, or publisher.”

Rick used to be a cop, like his dad. And, like his dad, he was kicked out. He is not on good terms with the local force. In fact, the Their thinks him guilty of murder and is hoping very hard that he'll soon be able to prove it. Without any work, apart from a bit of part time bar work, he's constantly harrased by the police for minor traffic infringements and the bills are piling up. Looks like the bank will be foreclosing on his house pretty soon. Then he'll be homeless, too.
Then along comes a possible paying customer. Her husband died fairly recently and the hanging was labelled as a suicide. But his estranged wife is convinced that he was killed. Is this because the suicide clause will stop her from inheriting his very sizable life insurance unless the verdict is changed? Or was the man really murdered? Rick wants to believe the latter because, after all, he can't seem to get the attractive country singer wife out of his head and the man had been a cop in the same force now hasstling him: he'd believe almost anything of that bunch. But what was really intriguing was that the dead man, an ex SEAL, had phoned the FBI only days before he died.
Still undecided, he takes an advance on work for one week - he really does need that money badly, - and starts to investigate, fall for the ex wife and try to avoid being arrested for murder himself. All, more or less, in a days work for Rick Cahill.

An enjoyable story with good characterisation of Rick himself and interesting.confrontational moments with others. But the story just didn't quite work for this reader: it was both predictable and too muddied by the various other players. but with some nice touches of humour. The narration by Travis Baldree, , however, kept the momentum going, being read with well paced clarity and expression, the characters also voiced individually. A good performance.

Down on their luck, troubled P.I.s usually make great central characters, but poor old Rick just seemed to be forever looking over his shoulder, trying to hide away from something he might or might only be suspected of doing, harping on all the time but not letting on to his readers what actually happened. At first intriguing, for this reader it began to be tedious towards the latter part of the book. Would I read another one - yes, if voiced by the same narrator. But recommend it? I don't think so.