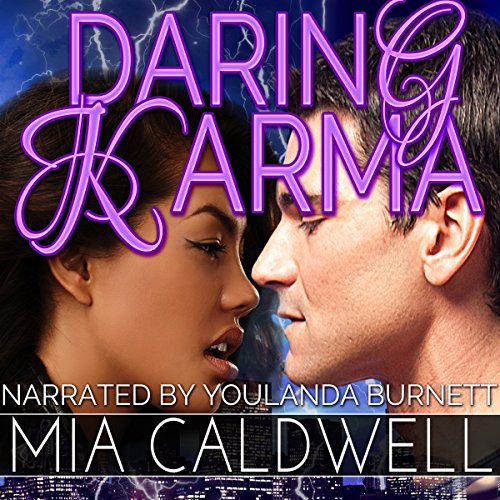 By: Mia Caldwell
Narrated by: Youlanda Burnett
Free with a 30-day trial

For six months, Karma and Nash have carried on a relationship via text after one night together. When he dares her to come to him in New York, she surprises herself by accepting. She has three weeks with him, and at first, that seems like enough. It isn't long before they both start feeling more than they had expected, but can there be more between a small-town Kansas girl and a commitment-shy New Yorker?

What listeners say about Daring Karma

The inflection and enunciation of the narrator was really bad to the point of being distracting. If I hadn't been so interested in the characters and their follow up to Chasing Destiny, I would have returned it.

hard to listen to

The narrator's voice was very high pitched and difficult to enjoy, however I did enjoy the story.

Destiny's sister Karma & Nash (former head of Destin'y boyfriend/husbands old company) have a one night stand & then 6 months of sexting between the 2 of them. A cute BWWM story when Nash dares her to come visit him in New York. He uses "I dare you" to get her to do anything that she is uncomfortable with. After He takes her to th building where her parent's use to own a night club. An old family freind recognizes her & chats with her about her family & the talent of her mother. The old family friend gets her to sing & is impressed. Telling a music producer about her. Meanwhile Karma is falling for Nask & pushes him to reveal the plan for their relationship. Due to the fact he has had his heart broken from loved ones being taken away, he doesn't want anything serious. But, don't worryThings happen & there is a nice ending. Perhaps there will be a 3rd book. This short sweet story was nice. Yes it was worth the small purchase/credit.

narration was so bad I couldn't listen. I honestly can't say how the story was because I only made it through the prologue. My 7 year old reads witn more emotion Next time spend the money and get a professional.

Karma and Nash had a fast meeting with long distance sexting to make the start of their relationship. This was just sex and a few excursions that we get to see a few of. The story was just too short and I was no vest or connected in either character. Lost opportunities.

Narrator just was not a fit for this at all. The men sounded like a woman with minor variations. I just continued on to she how Karma got her HEA.

Great, but it could have been a little more daring. To short but I like it.