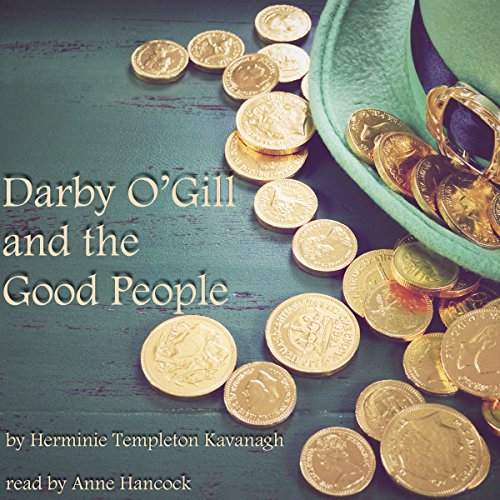 Darby O'Gill and the Good People

Darby O'Gill and the Good People

By: Herminie Templeton Kavanagh
Narrated by: Anne Hancock
Free with a 30-day trial

If the name seems familiar, these tales about Darby O'Gill and his encounter with the fairies were adapted for a Disney movie, Darby O'Gill and the Little People. They tell the story of an Irishman whose cow is captured by the fairies - or "good people". In his determination to recover his property, Darby finds himself in the center of their home, the mountain Sleive-na-mon. Not wishing to remain a captive forever despite the cordial hospitality of his hosts, he escapes through a clever ruse and earns the admiration and friendship of their King Brian Connors. Now Darby O'Gill is a local hero and his adventures continue as he encounters leprechauns, ghosts and banshees under the skeptical eye of his wife Bridget and the local priest.

What listeners say about Darby O'Gill and the Good People

I’ve enjoyed listening to Anne Hancock in other works. But the Irish accent just really didn’t do it for me ... and I tried dozens of times since I got this last year. At some point, one knows when to crank out the review and let it go.

This author and narrator were new to me. I loved the story and thought the narrator did a fantastic performance. I remember hearing some bits of Darby O'Gill growing up and this book was a reminiscent listen of stories my grandmother told me. Very enjoyable and suitable for all ages. I was voluntarily provided with this review copy audiobook at no charge by the author, narrator, and or publisher.

Fun story with a wonderful narrator!

Would you listen to Darby O'Gill and the Good People again? Why?

I really liked the fairy King Brian Connors. He was entertaining and fun for me to listen to.

Which character – as performed by Anne Hancock – was your favorite?

Brian Connors, king of the fairies.

I didn't know anything about the Disney version of this story so what really made this enjoyable for me what the narration. Anne Hancock was perfect! It's a joy to listen to a story where the accent is appropriate and the emphasis and timing is right on. I was voluntarily provided this free review copy audiobook by the author, narrator, or publisher.

Fun read all around

If you love Irish culture and a good story you will love this book. The narrator did a great job and really added to the experience.

I loved everything about this!

It was the perfect story, performance and great for just wanting to hear something fun.

Drby O'Gill and the Good People

This was a highly entertaining retelling of the well known stories.I enjoyed Anne Hancocks performance.“I was voluntarily provided this free review copy audiobook by the author, narrator, or publisher.”

Joy to listen to

These stories were so much fun for me to listen to. These were the type of stories I savored. I would listen to one of the stories a day until I was finished. While I wanted to rush through to know what happens all the way through, I wouldn't let myself. Like a good wine, they should be savored.

The narration of these were spot on target. I couldn't have asked for a more entertaining reader for these stories.

Great tale of Irish and the fae

A true classic told by a wonderful narrator. Be ready to be transported to Ireland of yore with Darby and the little people. Multiple stories that are great standalone and yet together build a picture that is breathtaking. The stories are quick and entertaining and full of knowledge on how to deal with the little people and how to avoid their traps. Great fun for all ages. I was voluntarily provided this free review copy audiobook by the author, narrator, or publisher.

I Couldn't Finish This Book..

The Narrator's Irish Accent Annoyed Me...I Couldn't Finish The Book Because Of It...

As A Fantasy I Liked The Plot Of The Book...It Just Couldn't Hold My Attention...

What made the experience of listening to Darby O'Gill and the Good People the most enjoyable?