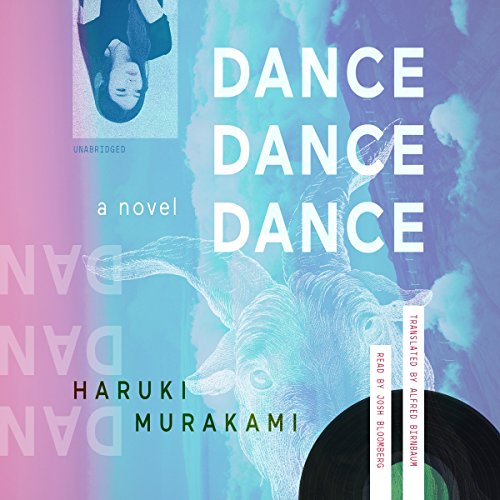 In this propulsive novel, one of the most idiosyncratically brilliant writers at work in any language fuses science fiction, the hard-boiled thriller, and white-hot satire into a new element of the literary periodic table.

As he searches for a mysteriously vanished girlfriend, Haruki Murakami's protagonist plunges into a wind tunnel of sexual violence and metaphysical dread in which he collides with call girls, plays chaperone to a lovely teenaged psychic, and receives cryptic instructions from a shabby but oracular Sheep Man.

Dance Dance Dance is a tense, poignant, and often hilarious ride through the cultural Cuisinart that is contemporary Japan, a place where everything that is not up for sale is up for grabs.

Weird, and not in the good way

The way the story handles the main character's relationship with a 13-year-old girl is just totally weird. He makes sexually suggestive, inappropriate comments that I just couldn't get past. (He is 34.) Then, near the end (semi-spoiler alert) another prominent character admits he killed someone, and yet the main character just feels bad for his friend - doesn't consider turning him in or even acknowledge the horror that his friend has killed someone. All in all a befuddling book that I probably should have skipped.

My favorite Murakami novel (so far...)

This book is not everyone’s favorite Murakami book, but I love it. This is my second listening, after having read it a few years ago.

There are still a few Murakami books I need to read. He’s one of my, probably, top twenty favorite authors.

I really like this narrator. I’m a stickler for a good narrator, and the their performance will generally decide for me whether or not I buy the audiobook, even if it’s one of my favorite books.

Getting to the point, this is a great book if you like Murakami, or slightly existential, murder mysteries with a touch of the supernatural. Although, if you’ve never read Murakami, he can be a little slow at times, especially if you’re used to faster paced books. The narrator does a fine job, making it quite an experience and I doubt you’ll be disappointed, so I’d say give it a shot.

This book is half science fiction and half mystery. I didn't think I would like it at first but I couldn't put it down -- or stop listening. It became spell-binding, more so because the reader was terrific with inflection and various character accents.

Don't let the rhythm of life die out, just dance.

I've only started reading Murakami's works, so this makes the 2nd after Wild Sheep Chase.

The way it relates (at least for me) with the questions I asked about my life. Like the main character faces same feel of being displaced in the world. It really does launch the train of thought.

I do not get tire reading books from Haruki I love his style, his stories. I wish I found more writers like him.

All of the drawn out descriptions of an underage girl’s body by a middle aged man. Gross

Dance Dance Dance: Attempting to Infer Cause at Increasing Degrees of Separation

Dance Dance Dance was, uh, well, I’m not yet quite sure how to characterize it.

First, the translator was excellent. By that, since I don’t speak or read Japanese, I mean only that the English prose resulting from his translation was excellent, unaffected, and had a mood and identity consistent with the first person narrator and main character of the story.

Second, the performer was excellent in his characterization of the different people in the story.

Third, the incidental details of the story, not the story so much, unless what I am going to say was an entirely contrived part of the story, provided a really fascinating view into the Japanese character as a hybrid of many different aspects of US and Japanese culture.

I know that as far back as the Meiji Restoration, Japan seemed far more interested in taking the US as a model, perhaps both politically and economically, than any European nation. And then there was WW2, where they hurt the ones they loved, who first had to kick the shit out of them and then help them rebuild. The result seems to have been more in the nature of a chimera, like a physical change, rather than a transformation, like a chemical change.

In a chemical change, the reactants undergo a fundamental transformation that results in a product that is chemically distinct from any of the reactants and may still contain some of the original reactants, depending on which was the limiting reagent and the other conditions controlling the chemical reaction.

In a physical change, all the original components are still uniquely themselves and still present but in, perhaps, very different arrangements.

A mixture of different size gravel subjected to vibrations of one or more frequencies, simultaneously or in series, at identical or different or changing intensities, will produce characteristically different sorting of that gravel according to size and/or shape.

Or dissolving solid sugar or salt in water. The form changes in characteristic ways depending on physical quantities such as amount and temperature, but the chemical nature of the constituents remains unchanged. And when you remove water by evaporation, that form changes from liquid to vapor, and the solute increases in concentration to the point that it may begin to crystalize, revealing a form characteristic of its chemical nature but not one caused by any chemical change.

So, the Japanese culture as depicted in this book seems to be a mixture of East and West. And, no doubt, the nature of Japanese culture may preferentially define what sorts of things from Western American culture get retained or excluded. But to me, the character of what I see in this book seems to be more the result of acquisition and adaptation rather than transformation.

Maybe to Japanese of a certain age reading this story in Japanese, this wouldn’t even be noticeable since it’s just the life they’ve grown up into. I don’t know, but for me it almost seems like another character of the story.

And as far as the actual story goes, we are shown that there’s something VERY important going on, BUT it’s observed by its effects at several degrees of separation distant from what is REALLY going on.

So I liken it to two things.

1. Suppose you have a national economy but you don’t have any national news service that will tell you anything about what is going on continually across the whole nation or globe.

It is, more likely than not, entirely possible that from the effects of a major weather disaster or political uprising have on the national economy one could, if one knew enough, be able to figure out from the changes alone at first, second, and third hand, what was actually the distant, unseen causes of those changes.

2. Suppose you took particular piece of music and used it as a musical core.

Repeat it enough times to generate a final desired length.

Assign different musicians to improvise to that musical core but without necessarily being able to hear the other musicians' improvisations.

Generally completely mute the musical core in the final mix except maybe at the beginning, regular intervals along the way, and the end in order to give it an overall sense of thematic unity.

The result will exhibit a sense of unity because all parts are metrically and harmonically synchronized to the variably and selectively appearing and disappearing musical core.

A very slight distance from the musical core and with a significant amount of the musical core left in the mix (like musical training wheels) is "light jazz." Something, constructed from fourth or fifth generation improvisations, that has enough unity to perceive that something is going on but which is so far back in the mix or behind the successive generations that you feel stupid for not immediately seeing it, is called "avant-garde" or "experimental jazz."

And to me, THAT is what this author is doing in this story and that he’s much farther in the direction of John Coltrane than Kenny G.

The result finally being that I, like the main character, was convinced that there WAS something going on that was real, though frigging mysterious, and I, like the main character, was desirous of figuring out just what the hell it was, but finally, just like the main character, I was forced to float along on the current with ever-decreasing hopes of ever discovering the real cause and the real purpose behind the unmistakably real, though ambiguous, effects, and to be satisfied with interpreting them by whatever happened to happen out here on the farthest edges of the storm by the way the waves kicked up by that storm eventually happened to jostle me.

So I believe that everything I’m surmising here was actually and consciously behind the author’s intent in the way he structured and wrote his story and that I feel toward him what the main character felt toward those mysterious forces ambiguously fucking with his life.

That said, the main character was likable, flawed, but sympathetic, and interesting to listen to, someone with whom it would be enjoyable to hang out with, especially because of his taste in jazz, Red Clay by Freddie Hubbard, his pleasure in cooking, and his generally non-judgmental, uncomplicated way of taking things as they came, but not being a push-over.

Which is WEIRD, right? Because this character was a creation BY this author toward whom I feel less sympathy or liking than I do toward one of his creations.

So, yes, I will probably choose other Audible books by this same author.

The usual completely fantastic Murakami perfection. Murakami again did not disappoint me, effortlessly transported me to a world I could never have imagined. Thank you Haruki!

After several darkly haunting albeit fascinating Murakami novels, this just left me smiling. Dare I call it his most romantic?

Love listening to this great masterpiece

Great book love this series couldn't stop listing to it. Listen to it while working.