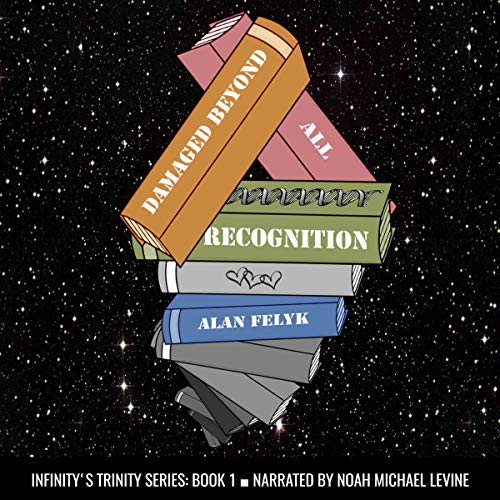 Damaged Beyond All Recognition

By: Alan Felyk
Narrated by: Noah Michael Levine
Try for $0.00

Extending the literary traditions of Kurt Vonnegut and Douglas Adams....

Paul Tomenko is no stranger to the improbable. He became a magazine sweepstakes winner and celebrated counterculture writer by age 19. Now, after reaching for a can of Chef Boy-ar-dee spaghetti and meatballs, he's traveling to and from God's library somewhere outside the Universe to prevent the end of eternity.

Because of a DNA flaw, humanity no longer can ascend through the Planes of Existence after they die. They can't access memories from countless past lives in previous versions of the Universe or acquire new recollections. That means no one will have the needed expertise to replace God when He dies. And, to complicate matters, Paul must enlist the help of his two lovers - Maggie Mae Monahan and Allie Briarsworth - because of their unique abilities. But the trio discovers the preservation of forevermore can turn someone's soul inside out. Literally.

The novel chronicles the life of an ordinary man under extraordinary circumstances. Paul is unwilling to accept a broken Afterlife that provides nothing more than eternal self-awareness. He is also reluctant to choose between Maggie Mae, a brilliant geneticist who has the uncanny ability to "connect the dots", and Allie, a novelist who inexplicably senses past and future events in the cosmos. The unexpected is to be expected from an unusual cast of supporting characters: Cher the Gatekeeper and Katharine Ross the Librarian, figments patterned after two celebrities for whom Paul has lusted; Gronk and Grita, two "resurrected" six-year-old neo-Neanderthals who are the most intelligent humans on Earth; Tsutomu Yamaguchi, an innovative bioengineer named after a Japanese man who survived nuclear bomb blasts in Hiroshima and Nagasaki; and Dr. Peter Lexington Townshend, the head of a genetics laboratory that already has prevented the Russians from stripping politicians in Washington, D.C., of all their memories.

Be prepared for a book that examines our metaphysical questions with a mixture of mind-bending possibilities, laughter, and tears.

What listeners say about Damaged Beyond All Recognition

This story is more romance than science fiction, and romance isn’t my cup of tea. Because of that, it was a bit of slog to get through but I stuck with it and I was glad once we got to the science fiction stuff (the aliens!). We see everything through Paul’s eyes and I didn’t really connect with him. Starting off during the Vietnam war, Paul is avoiding the draft by going to college, but he’s only making a half-hearted try at it. He’s mostly in it for the parties and the ladies.

Paul’s character evolves a little over the story, but never enough to capture my attention. He’s a bit of a cliché. If a woman isn’t interested in him, it’s because she has a stuck up her butt and doesn’t know how to have fun. For most of the story, he’s the only male character and every female character eventually falls for him. Of course his personal equipment becomes the fascinating topic of all his lady friends. And the ladies are all very jealous of one another and Paul’s affections towards them. It was a bit painful to slog through these sections of the book.

I did like Paul’s journalistic side. He really took that to heart and became a small champion of sorts. And I loved the idea of the heavenly library where nearly anything in existence can be researched. Who wouldn’t want a library like that? I’d love one, or 3.

The ladies were really one dimensional but there were things I liked about each. Maggie Mae is career driven and a scientist, so I instantly related to her. Allie is all heart and support but I still liked her in a superficial way. Kathryn is the heavenly librarian and who doesn’t love librarians? I didn’t like that they were essentially a parade of Paul’s sex fantasies, especially Kathryn (that’s bluntly stated multiple times in the story). These ladies could have played much more important roles, but mostly they are there to support and sleep with Paul.

Over all, I give it 3/5 stars. It does have a plot and some bigger ideas that are fully developed in the story. I wish it had more scifi and some finesse.

The Narration: Noah Michael Levine is great for Paul’s voice. He does all the voices so clearly and captures Paul’s humor perfectly. I did sometimes have trouble discerning between Maggie and Allie, especially for those few scenes where they are together sniping at each other. However, his voice for Kathryn was distinct. Levine captured the emotions of all the characters very well. There were not technical issues with this recording. 4.75/5 stars.

I received a free copy of this book in exchange for an honest opinion through Audiobookworm Tours. All opinions are my own.