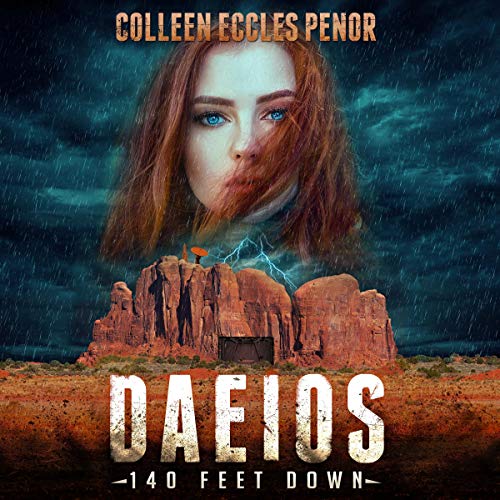 By: Colleen Eccles Penor
Narrated by: Tiana Saunders
Try for $0.00

They believed Daeios would be a safe haven.

Fleeing apocalyptic weather, a young survivalist woman and her family seek safety deep underground. But a new danger awaits them.

When the leaders of the shelter announce their plans to repopulate the earth using all fertile females, Shea knows she will be forced to become a breeder. Horrified at her impending fate, Shea must make the gut-wrenching decision whether to breed with an elderly, sadistic man and bear his child, or to fight the breeding, knowing that defiance will endanger her life and that of those she loves most.

A dystopian thriller with overtones of The Handmaid’s Tale, Shea’s chilling story will appeal to listeners with an interest in family and survival.

What listeners say about Daeios: 140 Feet Down

we're not far from this..

Well done . I thought It had everything. Climate change, a corrupt socialist government, genocide, sex, murder, gun control, drugs, shooting your way out of that government, even tipped a cap at the pro life pro choice debate Well executed!! I will listen again and look forward to the next one!!

The first few chapters were fantastic and then it just kind of fell on it's face. Lots of plot holes and it leaves you with many questions and no answers. At one point she sprains her wrist and then a few minutes later it was broken? I think it could be a great story, it just needed more proof reading and more details. The reader did a fantastic job.

I usually listen to books with my headphones on while doing other things. So, it is easy for me to get distracted if the story line and the performance aren't on track. I must say the story kept my attention from start to finish! Most books I listen to have male narrators so it was refreshing to hear female narration. Of course, it was certainly appropriate for Daeios! Ms. Saunders did a great job. This is the first novel I have "read" authored by Ms. Penor and I will definitely look forward to new titles.

A good book. a few places the narration is echoed the story feels rushed Good

Glad I took a chance!!

This is my first review after listening to 200+ audio-books.

I mention the narrator first because I find I cannot stick with an audio-book--no matter how compelling the story--if the narrator doesn't bring it to life for me. Fortunately, Saunders did just that! (I can only imagine what she could do in a full Audible studio. That's something I'd pay to "hear.")

Eccles Penor's story concept is intriguing. I’d describe it as a hybrid of post-apocalyptic fiction and young adult thriller — with a healthy dose of Handmaids Tale thrown in. Be warned: it’s not for the faint of heart. At first, I found it difficult to root for the main character. Fortunately, her character developed with the story. 🙂

While not absolutely necessary, there is room for a sequel. I hope Eccles Penor plans to write one!

A great story to listen to

DAEIOS: 140 FEET DOWN
DAEIOS is the first audiobook I have listened to in its entirety. Previously, I was not a fan of audiobooks because I just could not concentrate on them. However, with a new, long commute time, I decided to try again. It turns out that DAEIOS was the perfect way to ease myself into reading in this new medium. The story itself was interesting, and the narration was well done. Tiana Saunders, the narrator, had an excellent voice and expressions for all the characters. She brought Shea to life with a wonderful relatability that made it easy to sink into the novel.
The story itself is fascinating. It combines so many different elements of dystopian and near apocalyptic fiction; natural disasters, the terrifying decline of society, powerful new diseases, sexist control, and zealots that offer redemption in a giant bunker.
Throughout the story, I found myself wishing that it was more than one novel, so that each of the elements was explored in more depth. The overall structure of the story was well-handled, with three distinct phases for Shae to live through. I don’t want to give too many spoilers, but I would have loved a little more detail about the last two-thirds of the books to really sink into it more. It also would have helped support the rather large change in Shae’s personality. That said, sometimes an author has a skill for giving just enough detail to make it all work, without bogging things down, and Penor mastered that.
The author skillfully married a whole range of themes in this story by keeping them tied to various plot points. When Shae was above ground, we got a good dose of the environmental and societal issues. When she was in Daeios, we got to see the cult-like brainwashing and sexism in full force.
One of my favourite parts of any story is character development. There is a clear trajectory of learning here for Shae, and for the most part, it was wonderful to watch. I was a little thrown by the resolution she made in the final part of the novel, as it didn’t quite seem to follow (in my mind, at least), from the trauma she faced.
Now, one thing that I enjoy about dystopian fiction is that the best stuff always leaves you feeling a little uncomfortable. A little off kilter. Whether it is because we can see our world spiraling towards that dystopian element, or because we are already there and are forced to examine it, that kind of thought provoking content is what I enjoy. There was some of that in this novel that I am still on the fence about. Part of the disaster-ridden future that Penor build is based on the idea that there was a racial divide, that we fell back in time to a point where white people were once more seen as superior to those of other races. Shae was brought up with this way of thinking, and it is clear that Daeios was created to propagate this feel of a master race. There are some references to people of other ethnic backgrounds splattered throughout the story, but always in ways that fall back on those old, uncomfortable stereotypes.
Overall, though, the main storyline is firmly grounded in Shae’s experience in Daeios, where race is not as much of an issue as gender, religion, and bodily autonomy. (((((((Skip to the next paragraph if you want to avoid spoilers)))))))) When she escapes, her resolution is to help restore an equal footing for all races. A wonderful goal, of course, but I have trouble connecting that with her experience and character development, as race played a minimal part in her experience. I understand that she no longer wanted to be an Elite, as that was tied with everything she went through, but the jump to uniter of the races didn’t quite connect for me. In the few times she came across people of other races, she treated them with nothing but suspicion and otherness. None of the interactions went well. It doesn’t make sense to me that she would then choose this as her purpose going forward, when she had learned such poignant lessons about power, authority, abuse, and bodily autonomy.
Above thoughts aside, Daeios was a great read. My favourite part had to be the shifts in Shae’s relationship with her mother. For some reason, mothers seem to get a pretty crappy story arc in a lot of modern film and fiction, so seeing that relationship grow was one of my favourite parts of the novel.
If you are a lover of dystopian fiction, Daeios is definitely worth a read. It is well-written, engaging, and dealt with a wide range of themes in a way that feels organic and considered. It was a great companion for my long commute, and showed me that audiobooks will be my new BFF if I can find other gems like this one.