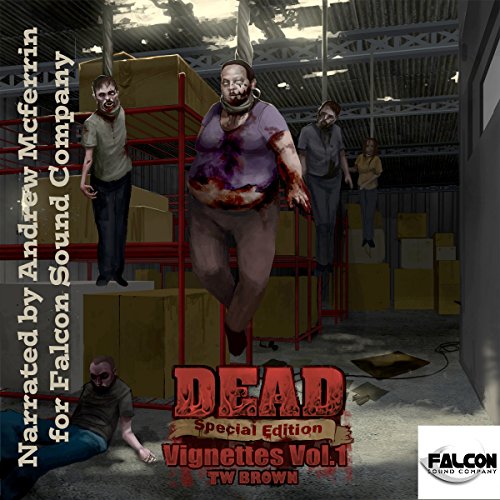 By: TW Brown
Narrated by: Andrew McFerrin
Try for $0.00

This is a compilation of the first three books in the Dead series:Dead: The Ugly Beginning,Dead: Revelations, andDead: Fortunes and Failures. Each special edition also contains close to 10,000 words of additional material requested by you...the audience! This special edition allows you to sink into a Dead world with your favorite people and not be "distracted" by those long absences as other stories intrude and get in the way. A special edition has been released for all three of the story lines that exist in theDead books - Dead: Steve's Story,Dead: The Geeks are also expanded editions of the stories from the first three books in the series.

Vignettes It's a vin vin situation

Would you consider the audio edition of DEAD: Vignettes (Vol. 1) to be better than the print version?

This is my second attempt at reviewing this book my first was going fine when I hit a wrong button on the keyboard and erased it instead of sending it, that will teach me not to multi-task with the TV when doing something important. The gist of my first was I loved to read as a kid and as I got older I discovered audio books which made it easy to read in my car or at work. When I first started reading the Dead series it captivated me, I was hooked from the beginning. I'll be honest it took me a couple minutes to get use to the chapter, and character jumps but when I got use it I loved it. I love the way TW Brown has of writing about a large group of people all doing something in different places at the same time, very creative. One of my favorite parts of the book is the part called "Vignettes".

I can't really say who my favorite character is, because there are many in the Vignettes that had only one or two stories than died, than there was some who had one or two stories and never repeated, but my favorite characters in Vol. 1 had to be, the guy in the lookout tower in the woods (can't remember his name he started out as a member of a main group and him and a few people stayed) so he only had one story in the Vignettes [ I would like to know more about what happened to them] and Garret and Kirsten. Garret was your average sick son of a bitch. He had mommy issues and projected them on to the women [and in one case girl] he meets. I guess you could say he is a sociopathic narcissist who treats all women like objects. He feels they are below him and an object for his perverted pleasure. He see's them as toys, for him to play with and then discard when he's done. What he didn't see was the strength in a little thirteen year old named Kirsten. Garret tries to break his toys so he can throw them out and get a new one. Through all the physical and mental abuse she never lost focus, she knew that she had to kill this animal before he did this to someone else. I felt that the ending of this particular short was a little anti-climatic considering all the crap he put her thru. I don't want to ruin it for those who haven't read it yet so I'll cut it short and let you enjoy it for yourself.

I was impressed with Andrew McFerrin's his interpretation was interesting. At first I felt like I was at a child's reading hour at a local library. It took a little while but I got use to it, I think the only problem I have is him doing the female voices [ a real female would be more convincing]. After I got use to it I found Andrew is very good at what he does he reminds me of Geoffrey Lewis from Celestial Navagations [ Geoffrey is a character actor who has been in hundreds of films and is the front man in a group where he tells stories while the band plays music] anyway Andrew's many voices sound like Geoffrey's.

If you could take any character from DEAD: Vignettes (Vol. 1) out to dinner, who would it be and why?

Todd thanks for including me in this project, and I hope this is what you are looking for.
Arty

Would you listen to DEAD: Vignettes (Vol. 1) again? Why?

Yes i would. I know there is stuff i might have missed and even re listening to what i remember would still be very highly entertaining

Jennifer Zombie..... it shares some insights into the zombies we wouldn't have known as well as sharing my first name. :)

The scientist in the bunker wasn't a particular favorite but he was an unexpected surprise.

Have you listened to any of Andrew McFerrin’s other performances before? How does this one compare?

I have listened to his performance in the other DEAD books. He does a Great job!!

If you could rename DEAD: Vignettes (Vol. 1), what would you call it?

I don't think i would rename it. The names given to all the Vol.1 books was perfect

I had been wondering about the animal zombies since the first book, this one helped explain that a bit. Can't wait to read more of these books!!!

This book was given to me by the Author for an Unbiased Review. Thank you Very Much TW Brown!!

At first a bit hard to get into the story with weird music that was very unpleasant and to me took away from the story being told. The characters were very well written and in your minds eye you see them as the story went alone and after learning each character you found yourself either cheering or booing them or just waiting to see their comes and hope it fast and painful. There is many story lines you get lost and I guess the author recognized this and stories was back to back. One other item I found interesting was each character had fight their own demons the prison mates had to fight to both stay safe and find a new identity most of them tried to be a better person and help others or continue their former life style.
There is so many great characters both human and zombies and you find yourself sitting on the edge of your seat or can not wait to hear the next one.

creepy and horrifying in tikmes haha.. i am not huge into zombies for reading but im finding i enjoy listening to them in audio form and also watching in tv.. this one was really good and the narrator sucked me in. i cant wait to read more of this authors stories

I love how you went deeper into each of the groups with these books. I am disabled had cancer 9 yrs, your books kept me company. When you are on chemo everyone in the house seems to disappear, lol your books and auditable kept me company. Your books are awesome and I don’t like zombies books your books have been the first to keep my interests. Andrew Mcfarrin hum love his reading, I love your narration also. Keep writing expanding every series

My first zombie story, not a fan of zombies, but as the story went on I liked it more. By the middle I couldn't wait to see what was next. I am hooked done started the 2nd book. I rated it very high. Thanks new fan of zombies.

Best listening I’ve had in a long while

Another Great Story brought to life.

What made the experience of listening to DEAD: Vignettes (Vol. 1) the most enjoyable?

I've read the books and I'm a great fan of TW Browns work. The narrator brings this epic story to life. He swaps between the characters seamlessly and with the right amount of tension and horror in his voice.

What was one of the most memorable moments of DEAD: Vignettes (Vol. 1)?

Its hard to pick one as there are so many but if a zombie was chasing me for the answer I would have to say the very beginning. The author always has you invested in the characters from the first few pages.

This book brings out all the emotions, I did laugh but there were also tears, terror and tension. I won't give away any of the plot but these in these books the hero's don't always make it which adds to the tension

Don't hesitate, download these now and prepare to be sweep away in the zombie apocalypse.