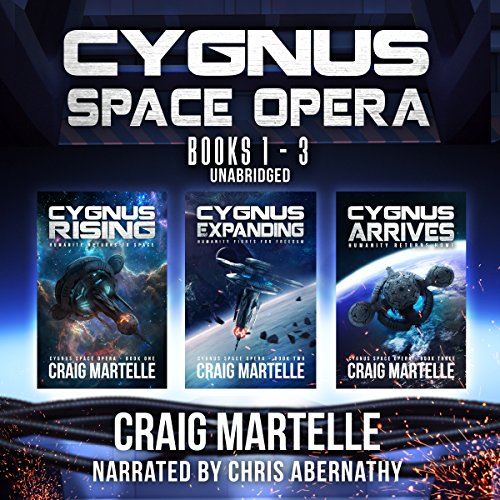 By: Craig Martelle
Narrated by: Chris Abernathy
Try for $0.00

Snarky Hillcats and the Cygnus Marines on harrowing missions.... What could go wrong?

From space they came, to space they returned. Humanity would not be denied.The crew trains for their mission and joins the Cygnus-12 as it tests the Interstellar Space Engine, venturing far beyond anywhere they've gone before.

They didn't expect to find life, but they did, another human colony at the far reaches of space. The Cygnus-12 goes on a mission of peace, but war beckons, and the space ship is the prize.

What do others have to say about the Cygnus Space Opera?

"Most authors can't make an animal character believable. This one does. Craig Martelle has a great imagination and can put it down on paper for you to enjoy also, just like the great writers of the golden age. His writing is very reminiscent of their work." - Amazon five-star reviewer

"...you will see the flavor of Sci-fi, Fantasy, and with enough sarcasm and humor to keep you highly entertained!"

"A character driven book, but with a stable plot as well."

"I enjoyed reading it very much. There is a lot of humor as well as action. I look forward to the next book in the series."

What listeners say about Cygnus Space Opera: Books 1 to 3

At first, I was intimidated by the length of this collection. But by the time I reached the major conflict of the first book, I quickly realized that I was absolutely hooked and couldn't get enough.

The first book begins a little slowly as the story and world are set up, but that time is well spent as Martelle does a great job of familiarizing the reader with the characters they'll be rooting for. It's almost like watching your friends do some great, some crazy, and some stupid things (relationships) with their lives and the dynamics between the characters is highly relatable. It is certainly the interactions between the characters and their tenuous, realistic relationships that gives the heart to this series.

I truly enjoyed the conflict scenarios and how they unfolded without following stereotypes, expected outcomes, or predictable paths. It was refreshing and made the experience immensely more enjoyable.

The narration by Chris Abernathy was superb, easily drawing the listener into the story, despite a few weird clicks and repeated half-sentences. I think those were audio editing points that may have been missed, but it only happened 3 or 4 times and didn't distract from the story or diminish the experience.

I absolutely cannot wait for Book 4 of the Cygnus Space Opera and the continuation of this story and characters, and I would love to hear it on audio as narrated by Chris Abernathy.

I feel this series was more of a military Sci-Fi than a Space Opera. I get that there is no hard science for their space travel, and the many species of characters, even though genetically human based, it was still a lot of Military Training in each book. In fact, each book had an expanded section of Military Training. It was interesting, and very accurate, as the author spend a lot of time in the marines. It shows. Here is my review for each individual book:

1 - This isn't my typical Sci-Fi read. It seems the world is already established, and I kind of just jumped in. That being said, it was easy to get interested. I like the diverse characters, their unique traits and the exploration they go on. As it turns out, they find something they don't suspect, and need to work together as a team, just as they had back in training camp together, to overcome the threat. It's a great tale of friendship and love, and I'm looking forward to finishing the rest of the series.

2 - Another great book in this series. I was happy to see them return to the last planet. I liked the internal politics keeping them apart, it was suspenseful and fun. I think the resolution happened a little too easily without much explanation with cats just being cats and pwning everyone. However, I will say, I love the attitude of the cats in this book. It reminds me of Jim Butcher's new Steampunk series. Cats are the true intelligent species in our galaxy. They sure act like it!

3 - Another enjoyable tale. The two highlight characters of the series were Cain, and his wife. I was happy to see the resolution between them in this book. I really loved their relationship in book 1, and was frustrated when he held onto his former girlfriend. However, after meeting the former girlfriend in book 2, it made a lot more sense, and made me connect with her as well. I can see his choice was hard, but ultimately, I feel he made the right choice. I loved this book, the action. It was sad to see some of the characters fall, but it was well done. I feel the meeting with earth was a little glossed over, with no real resolution at the end. I imagine it's a piece of the puzzle for a larger series at work, but still unresolved for a trilogy, which was a little frustrating. And same with the unresolved politics back home. Other than those unfinished pieces, I thoroughly enjoyed this trilogy.

Listening to the audio book of this trilogy, I will say, the narrator is way too slow. When I changed my mp3 player's speed from 'normal' to 'fast' it made a HUGE difference. Fast speed is definitely the pace you'll want to listen at, especially with the military style the book is written in. It gives it that fast pace feel, which the narrator at normal speed did not. When I set the audio to fast, he sounded perfect.

I forced myself to listen to one book and part of another. I think this book should be marketed for Junior High because of the length of the books. I loved Watership Down and Charolet's Web.

no not even close

120 seconds in to this audiobook I knew without a doubt I'd go no further. I'm out 20 bucks. There are kid's comic books much more intelligent than this crap. I like the reader's voice. Too bad.

Yet another win for Craig Martelle.

I was drawn in & listened into the wee hours. He does it with compelling characters, a bit of suspense, &...poof, you're hooked...

not a space opera

lasted two book then had to give up.
returned.
just doesn't work.
it's not a space Opera, author definitely doesn't have a military background so the military aspect (as well as technology) of it is weak and inconsistent. the rest is unnecessarily complicated.

The storyline seemed too simplistic and maybe a little too moralistic for me. This is the first audio book I remember with obvious production errors including a production queue in the middle of a scene. I was also disappointed that the science was explained at a high school level, when it wasn’t glossed over entirely. More research by the author or a science advisor would put more punch in a “science” fiction story.
All that negative aside, it is worth the price given it is 3 books.

Entertaining story with some caveats

narrator did a good job. the story was engrossing and the execution felt a little blunt. instead of showing us through the story why characters did and felt things it ended up with the author telling us a lot of what they did and why. perhaps it's a style thing and it's just not my cup of tea. the concept and world were great otherwise.

could really have used some major editing.

super slow. loved the idea, it was just that so little happened in so many pages.

The world built was interesting and kept me ingadged and this boxed set is a good introduction to the world.

an extra star for no swearing or blasphemy from this author, proof you don't need it for a good read. love the cats and imagination

Would you consider the audio edition of Cygnus Space Opera: Books 1 to 3 to be better than the print version?

I haven't read the printed versions.

What was one of the most memorable moments of Cygnus Space Opera: Books 1 to 3?

I particularly enjoyed the discovery of the source of the robots. The introduction of Billy-Joe-Bob to "Boxy".

What does Chris Abernathy bring to the story that you wouldn’t experience if you had only read the book?

The tone. Chris puts a lot of effort into making sure that the narration of the books is done well, and conveys the emotions of the characters wonderfully.

The books made me laugh out loud on a number of occasions. Brutus in particular.

Great stories, narrated well. A great team for creating audio books. I hope to listen to more in this series.

a relaxing listening book. great storytelling keeping the listener engaged Will try more of the author