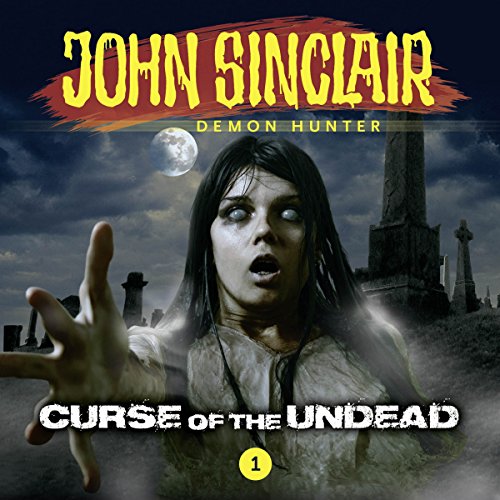 Curse of the Undead

A new audio drama series: blockbuster cinema for your ears only: a breathtaking mixture of gothic horror and fast-paced action paired with an audio-rich atmosphere. Produced internationally in London and Los Angeles with Andrew Wincott as John Sinclair. John Sinclair: Hell's best entertainment - for your aural pleasure!

There are so many ways a person can die. Sooner or later, everyone's number is up, and no one comes back... or do they?

On a cold November night, a grieving father picks up his hunting rifle and shoots his only daughter in the head. The police are mystified. Why was the girl even at the house? Why wasn't she at the mortuary... awaiting her burial? After all, Mary Winston had been declared dead two days before. The incident is only the first in a series of mysterious attacks in the small Scottish town of Middlesbury. Dead bodies go missing. A cemetery caretaker is devoured alive. An ancient curse is about to be unleashed... Detective Chief Inspector John Sinclair works for Scotland Yard's Special Division, an elite unit that deals with extraordinary cases. DCI Sinclair is a battle-hardened veteran of Afghanistan, a man haunted by the past. But nothing could have prepared him for the horrors he's about to face. He goes to Scotland to investigate the gruesome murders but what he finds is a town in the grip of fear. The people of Middlesbury are harboring a secret. A secret that is about to explode...

What listeners say about Curse of the Undead

I did something similar when I was 15yo so I can appreciate that quality of sound samples, voice and precisely cuts. Thx I very enjoy it. I writing down my another goal in my list "continue with that recording stories like this". Bruno

What's up with those overinflated British Accents?

This is the long anticipated English version of the long-successful German radio drama John Sinclair - Der Geisterjaeger (literally..Ghost Hunter). Unfortunately, this production completely misses the ambience, characters, and high-quality of the Original German production. I speak fluent German and American English and was appalled to hear the "high Oxford English" spoken on this track. I love British accents but THIS is so over-inflated and exaggerated it is as though it can't take itself serious - it almost sounds faked!. I mean, there ARE Brits who talk like this but not in most of the UK! Why not use voice actors with average British accents? Why does it have to be so outrageously exaggerated?

Would you be willing to try another one of the narrators’s performances?

If you don't mind overinflated voice acting and you are completely unfamiliar with the original German series, perhaps this will appeal to you.

I don't understand why the music and ambience couldn't have been the same here as in the Original German. A worthy experiment - unfortunately it failed.