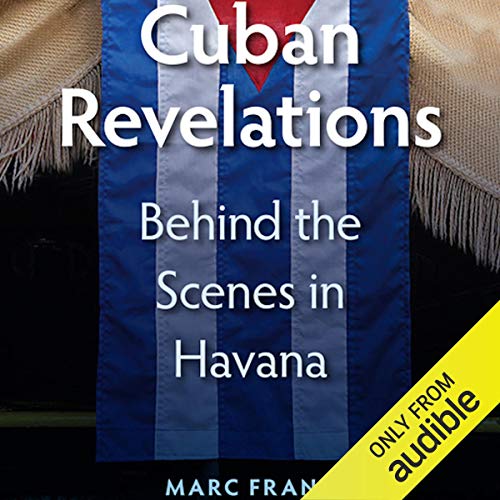 By: Marc Frank
Narrated by: Danny Campbell
Try for $0.00

In Cuban Revelations, Marc Frank offers a first-hand account of daily life in Cuba at the turn of the 21st century, the start of a new and dramatic epoch for islanders and the Cuban diaspora.

A US-born journalist who has called Havana home for almost a quarter century, Frank observed in person the best days of the revolution, the fall of the Soviet Bloc, the great depression of the 1990s, the stepping aside of Fidel Castro, and the reforms now being devised by his brother. Examining the effects of US policy toward Cuba, Frank analyzes why Cuba has entered an extraordinary, irreversible period of change and considers what the island's future holds.

The enormous social engineering project taking place today under Raúl's leadership is fraught with many dangers, and Cuban Revelations follows the new leader's efforts to overcome bureaucratic resistance and the fears of a populace that stand in his way. In addition, Frank offers a colorful chronicle of his travels across the island's many and varied provinces, sharing candid interviews with people from all walks of life. He takes the listener outside the capital to reveal how ordinary Cubans live and what they are thinking and feeling as 50-year-old social and economic taboos are broken. He shares his honest and unbiased observations on extraordinary positive developments in social matters, like healthcare and education, as well as on the inefficiencies in the Cuban economy.

What listeners say about Cuban Revelations

I just returned from Cuba and this book allowed me to weave a macro level story with my personal experiences. Lots of facts and figures along with an even handed viewpoint.

after 10 days in Cuba this book was right on

A must read to understand Cuba

Bravo to Marc Frank for this immensely important piece of work. The fact that this was written even before the historic change in US-Cuba relations on December 17, 2014 is a testament to Frank's true insight into Cuba's political and economic path.

What disappointed you about Cuban Revelations?

The author presents himself as a leftist journalist, but he is not a true leftist for he is an apologist for a dictatorial Castro regime. The author is only an opportunist willing to help the dictators. If the author would be from the left, he would defend the democratic opposition and murdered Christian Democrats, such as Oswaldo Paya, instead of promoting Castro’s Cardinal Ortega. This author would not completely ignore all the abuses and human rights violations in Cuba for last 57 years of Castro rule. Instead, the author praised Cuban's ruling dictators, especially Raul, because it is instrumental for the benefits for himself and his family in Cuba. The truth is if he attempted to criticize the regime, he would be thrown out of Cuba and his family would be persecuted. His interviews with Cuban people are worthless because the prisoners and guards in Cuban paradise, just like in Soviet Gulags, will not tell the truth to a foreign correspondent unless they are suicidal and are happy to become persecuted for providing this information to a western journalist. The author also ignored the fact that the whole island and its economy are the property of Cuban military, lead by the children of Raul and Fidel. They will assure the continuation of the same systematic abuses for many years into the future. Blaming the US brocade for all economic disasters in Cuba is dishonest for the rest of the world is trading with Cuba, including my country. The real problem is precisely in dictators who have appropriated all Cuban national resources and initiative.