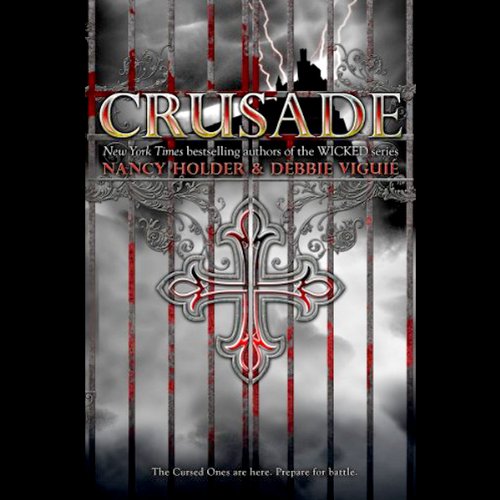 By: Nancy Holder,Debbie Viguie
Narrated by: Nicola Barber
Try for $0.00

For the past two years, Jenn has lived and trained at Spain's Sacred Heart Academy Against the Cursed Ones. She is among the few who have pledged to defend humanity or die trying. But the vampires are gaining power, and the battle has only just begun.

Forced to return home after death takes a member of her family, Jenn discovers that San Francisco is now a vampire strong-hold. As a lone hunter apart from her team, Jenn is isolated and at risk. She craves the company of her fighting partner, Antonio: his protection, his reassurance, his touch. But a relationship with Antonio comes with its own dangers, and the more they share of themselves, the more Jenn stands to lose.

Then Jenn is betrayed by one who was once bound to protect her, causing her to doubt all she had held as true. To survive, Jenn must find the courage to trust herself - and her heart.

What listeners say about Crusade

I was very interested in a vampire story that wasn't the same ilk as The Twilight Saga. This story is fairly good. I liked the use of historic references, of religious activities (pretty much go hand in hand with vampire stories), and the characters were not nearly as shallow as I thought they might be for an action/horror story.

The narrator however, made it hard for me to enjoy. I'm tempted to get the paper or e-book and read it for myself. Her whispery voice was distracting and annoying. The accents were the worst I've heard in a while. What is the problem with getting someone who really knows what a south Louisiana accent sounds like? It isn't the stereotypical southern accent. And this woman's southern accent made me think she was channeling Paula Dean. It was high-pitched and didn't match the content of the dialogs for the character. Her British accent was passable. The Dutch accent sounded just like the British. The pronunciation of Spanish words was a mixed bag: sometimes good, mostly poor.

This was really hard to listen to. It is a good story and narrator was great. It just keep getting side tracked and I would zone out in places. There is a lot of back story but it weird places in the story. the beginning is very slow. But it is a good story once you get to the end and you want to read to the next book but not in a have to have the next book.

This book is a continuation of a story begun in the Eternal Kiss, an anthology of vampire stories. Vampires have taken over the human world and many countries have bowed to their rule. There are still isolated pockets of resistance and this novel follows the adventures of six hunters. The book spends a lot of time filling in the backgrounds of the characters, and while these back stories are interesting in themselves, they prevent the book from moving at a fast pace. The main heroine is, in my view, rather a weak character. In fact, there is no real character development at all. The team do not get drawn closer together by their missions, which are a succession of failures. Many things aren't explained and nothing is really resolved at the end, which leaves the reader with a feeling of disattisfaction. The book is well written, and the Authors have clearly put a lot of time into researching the different languages and cultures of the characters, which comes across particularly well in their speech. The book is also superbly narrated. While the scene has been nicely set for the second book in the series, the question remains, is the listener's curiosity enough to make them pick up the next book?