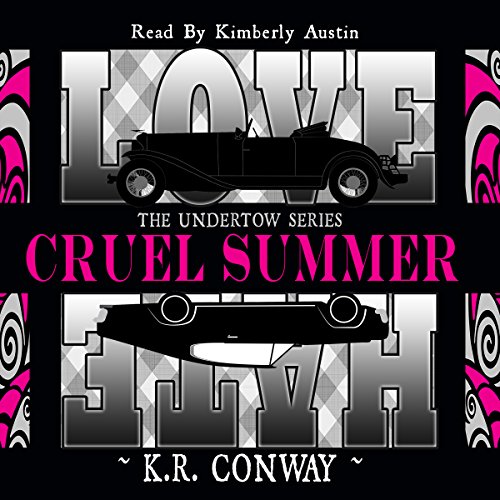 Kian O'Reilly is flawless as a killer.

Well practiced in the art of making murder look like an accident, he is selfish, wealthy, and totally arrogant as a soul-stealing immortal. But when he ends up stranded on Cape Cod with a stolen car and a dead drug dealer in the trunk, he thinks his luck couldn't get any worse.

That is, until Ana Lane shows up.

Gifted as a mechanic and surfer, feisty Ana is not a fan of the entitled frat boys who show up every summer, messing with local girls. Believing Kian is one of those typical rich brats, she fixes his car and ruthlessly dismantles his cocky ego...which intrigues the dangerous soul thief. Determined to spend more time with the prickly mechanic, Kian sets out to understand what makes Ana so fierce. Soon, however, he uncovers the painful truth behind the real Ana Lane, and the decision to save her from a true monster may destroy them both.

What did you love best about Cruel Summer?

I enjoyed Kimberly's way of changing her voice as the characters spoke.K.R.Conway wrote the scenes that were expressed by Kimberly so that I felt as if I was really there.The listening time went so fast , while laughing and tearing .

The many different scenes that I felt so apart of. .Like I was there !!!!!

Her voice is perfect, also her ability to change characters in a conversational setting.

It did both.More laugh than cry.

Going to read more K.R.Conway and will listen to " The life of Mama Cass Elliot" on audible by Kimberly Austin.